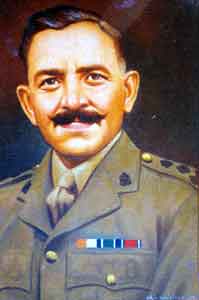 Military history is written by the victor. But the history made with supreme sacrifice of men and women defending their motherland and written in blood, even if defeated, is never allowed to die. Such history is preserved and recalled on every appropriate occasion to enlighten and inspire future generations to emulate the heroic deeds of their predecessors so that the nation regains the lost glory. Hence this 125th birth anniversary of Brig Rajinder Singh on 14th June is an occasion to recall history written with his blood.

Aware that during 68 years after his martyrdom, a lot has been said and written about Brig Rajinder Singh, MVC by military historians, army officers, me and the media, yet at the risk of repetition, I thought it may be of great relevance to recall true versions of some officers and men who fought with him and lived to tell the tales to their progeny from whom I have the inputs.

Brig Rajinder Singh’s martyrdom is unique in the annals of military history. Nowhere in the history of world armies there is an instance of an officer of Brigadier rank being ordered to command a contingent of 100 men and fight ‘to the last man and last round’. This is best done by a Captain or Major. But he did it not only as a brigadier but also as ‘Chief of States Forces’ and fought to the last round and laid down his life at the altar of his Ruler’s command in the centuries old Dogra traditions.

His martyrdom was a saga of unmatched courage, valour, devotion to duty and self sacrifice.

While Maharaja Hari Singh was thinking about accession, Pakistan, the newly formed nation, on the other side of the borders, harboured other ideas. Sensing an unfavourable decision by the Ruler, Pakistan decided to grab the State by the use of military force. For this purpose an assorted force of re-entranched soldiers of 2nd world war, serving soldiers shown on leave and tribesmen of North West Frontier Provinces, supported by regular Army was assembled. Exploiting the religious sentiments, the pro-Pakistani elements in the J&K State Forces were weaned away to join this force.

The hectic activity and aggressive posturing by way of large scale movement of armed men in civilian clothes in Pakistan, noticed by our own people living close to the border, spelled misadventure. A delegation led by Sardar Sant Singh Teg and Harnam Singh Raina of Garhi came to Srinagar and met the Maharaja around mid October. Maharaja assured them all help and advised the delegation to meet Brig Rajinder Singh, Chief of Staff. During  their meeting the delegation was informed of the inability of the Army to provide additional troops as none were available in the entire State Force comprising of 9 Infantry Battalions because all the units had already been deployed on the long and tortuous state border. However, he agreed to issue them some rifles which could be given to trained people. Weapons were issued on 21st October 1947. Unfortunately  the same night, Col Narain Singh, CO of 4 J & K Bn and his Adjutant Capt Ram Singh and the other officers and men had been butchered by pro-Pak Jawans of the battalion and taken possession of all the weapons and equipment of the Bn Hqs. The situation in other sub-units and posts was no different. This was a big blow to the plan of defence of Jammu and Kashmir. All the means of communication, wireless sets and telephones had been destroyed and the personnel manning them had either deserted or had been killed.

The situation became very grim as Srinagar stood threatened with no information and reaction capability available to the Ruler. The only source of information remained the fleeing civilian population.
Brig Rajinder Singh, after getting over the initial shock, ordered Capt Nasib Singh to proceed to Uri and destroy the Uri bridge on 22 October. In the meantime a small force of about 100 combatants was raised by milking the unit rear parties at Badami Bagh. This was the only force available to halt the enemy advance at a suitable distance away from Srinagar primarily to enable the Ruler to negotiate the issue of accession with the govt of India. The demolition team of Capt Nasib Singh could only destroy the bridge partially.

Brig Rajinder Singh himself assumed command of the newly formed force. Maharaja spared his ADC, Capt Prithi Singh and put him under his command. Capt Khazan Singh was selected to be his operational staff officer. The force left Srinagar in hurry on October 23rd in 4 X 1½ Ton Lorries. Brig Rajinder Singh with Capt Khahzan Singh travelled in a 1 Ton Power Wagon. The force did not meet with any opposition till Uri. After Uri, stray shots from small arms and mortar fire were heard at a distance signalling enemy contact any time.

As the column reached Garhi, they came under heavy automatic and mortar fire resulting in casualties in the leading vehicles. Capt Prithi Singh, who was leading the advance was seriously wounded. To prevent further casualties, which would further deplete the strength, an immediate withdrawal was ordered. Some of the drivers displayed outstanding skill in turning about the vehicles under heavy fire. The impact of the contact with the overwhelmingly enemy strength and firepower was such that the force withdrew to Baramulla. Capt Prithi Singh with other casualties was evacuated to Srinagar.

On arrival at Baramulla, Brig Rajinder Singh spoke with the Maharaja on SP Baramulla’s, L D Thakar’s telephone (later IGP) and apprised him of the situation. After briefing by COS, His Highness having possibly consulted his advisors sent a personally signed order to Brig Rajinder Singh by name directing him to proceed to Uri forthwith and fight the enemy there ‘to the last man and last round’. This order was delivered by hand late in the evening of 23rd October 1947 by Brig Faqir Singh, Commander Kashmir Brigade.

In the meantime detachments of 2 X mortars and 2 x MMGs, which had earlier been flown in from Jammu, were put under the command of Capt Jawala Singh.

Entire contingent moved to Uri and occupied a hastily prepared position astride Uri Bridge by first light of 24th October. The enemy who was advancing astride river Jehlum soon gained contact and brought down heavy automatic and mortar fire on them. However, the enemy did not launch a determined attack due to which they were able to hold Uri till last light 24th.

By the evening of 24th October, from the pattern of tactics employed to overrun positions, it became clear that the enemy avoided to engage in pitched battles. His movements on the flanks suggested that he would encircle positions with verwhelming strength and force a surrender. Thus, after a brief discussion with officers, COS decided to modify his plan of fighting to the last man and last round at Uri. The new plan envisaged to fight the enemy from 3 delaying positions between Uri and Baramulla. Depending on the operational situation, the force was to occupy delaying positions in Rampore, Mahura and Buneyar. During the next three days, 24th to 26th October, the enemy tried to overpower the force but all his attempts were effectively thwarted by brave Dogras.

During the fight for Mahura Power House, Capt Nasib Singh was seriously wounded on 25th by a sniper bullet and he along with other seriously wounded men were sent to Srinagar. To prevent encirclement, Brig Rajinder Singh ordered withdrawal to Buniyar on night 25/26 October. At Buniyar, the enemy became more aggressive. A fierce battle was fought on 26th October. The enemy’s desperation grew after receipt of the news that the Ruler had signed the ‘Instrument of Accession’with the Indian Union and possibility of induction of the Indian Army into the State surfaced. However, despite the intense pressure brought on defensive positions, the enemy failed to overrun them.

In the developing situation, the Buniyar position became untenable and withdrawal to yet another position was ordered.

The withdrawal was planned to start after midnight when the moon would be up and vehicles could move without their headlights on. The column consisted of three vehicles carrying troops. 1 Ton power dodge was driven by the COS himself with Capt Khazan Singh in the front seat. The convoy had hardly gone about a mile when it hit a road block which was effectively covered with automatic and mortar fire. Heavy fire was unleashed as soon as the first vehicle hit the road block. Capt Jawala Singh, who was travelling in the first vehicle was wounded along with a few other men but the first two vehicles were able to get through. COS’s vehicle got stuck. Heavy volume of fire was brought on it which totally smashed the vehicle and killed the COS while Capt Khazan Singh was seriously injured. Out of 4 signalmen manning the wireless set, only one survived with an injured leg.

An epoch making 5 days skirmish between a small force led by Brig Rajinder Singh and over 5000 strong enemy ended with preventing valley from falling into marauder’s hands. Out of five officers involved in this operation only Brig Rajinder Singh was martyred and the other four including  Capts Prithi Singh, Jawala Singh, Khazan Singh and Nasib Singh survived with injuries and returned to active service after  treatment. 70 % soldiers said to have been killed, actually survived but with serious and disabling injuries. Brig Rajinder Singh was awarded MVC and given the unique title of Saviour of Kashmir and hence deserves to be remembered on every appropriate occasion.

One thought on “Saviour of Kashmir”