Saudi Arabia and House of Saud at the Heart of Terrorism 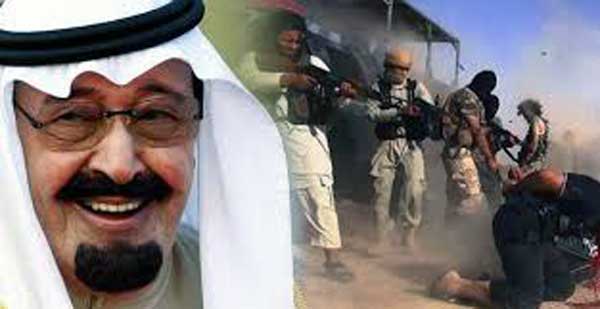 Across much of Middle East, South Asia, Africa and even in Europe and America, terrorism is being attributed by Most of the eminent analysts to the rogue element in Afghanistan, Pakistan, Libya, Iran, Iraq, Syria or such other nations.

House of Saud considers themselves as the custodian of Islam having the Holy site of Mecca and Medina. They presume that it is their birth right to lead the Islamic world by any means possible, be it harboring, funding and promoting terror groups.

What most of the analysts have missed out or have not highlighted is, the role played by Saudi Arabia as a country and House of Saud as a ruling family to spread terrorism across the world.

It is primarily Saudi Arabia and the ruling House of Saud self-perception that ‘God has given them the right to promote their religion by whatever possible means’ is behind much of the present day trans–national terrorism.

House of Saud considers themselves as the custodian of Islam having the Holy site of Mecca and Medina. They presume that it is their birth right to lead the Islamic world by any means possible, be it harboring, funding and promoting terror groups.

With its huge cash reserve coming out of Oil, it is no secret that the funding of all such terror groups like Al-Qaeda or ISIS has been by Saudi. The world at large knows Saudi angle of terrorism but has not taken any action against them.

Western governments traditionally play down the connection between Saudi Arabia and jihadism, whether of the variety espoused by Al-Qaida or by Abu Bakr al-Baghdadi’s ISIS. There is nothing conspiratorial or secret about these links.

Is it not on record that 15 out of 19 of the 9/11 hijackers were Saudis, as was Bin Laden and most of the private donors who funded the operation?

Whenever Saudi Arabia acted against terror group, it was due to the domestic threat to the ruling family and not because they wanted to end the menace of terrorism.

Saudi sympathy for anti-Shia “militancy” is identified in leaked US official documents. The then US Secretary of State Hillary Clinton wrote in December 2009 in a cable released by WikiLeaks that “Saudi Arabia remains a critical financial support base for Al-Qaida, Taliban, LeT and other terrorist groups.”

In another diplomatic cable published by WikiLeaks, the LeT which carried out the dastardly Mumbai attack in 2008, is reported to have secured money in Saudi Arabia via one of its charity offshoots which raises money for schools.

The funds meant for Islamic Charities are being syphoned off for terrorism. What makes the exchange of fund easier is the annual pilgrimage of Haj wherein the terrorists and their donors launder and exchange funds through proxies and there front companies.

Hundreds of millions have been channeled by wealthy Saudi sheikh who indeed are in complicity with House of Saud to fund the terror network across the world.

A case in point is the recent exodus of migrants from Syria to Europe, wherein various countries agreed to accommodate the Syrian refugee as per their capability. When asked about the Saudis contribution to tackle the refugee crisis, one of the member from ruling House of Saud said that they would not allow refugee to settle in their country but would provide funds for constructing mosque every ten kilometers in other countries where they settle down.

The official line adopted by Saudi is completely opposite of their conduct on ground. Saudi King Salman says: “Terrorism and fanaticism have done more harm to Islam than anything else.” This is the party line of the House of Saud—that, in the words of its last king, Abdullah, ‘’Saudi Arabia stands in the face of those trying to hijack Islam and present it to the world as a religion of extremism, hatred, and terrorism.” Such statements are meant to reassure, but they ring hollow in the face of evidence.

Any meaningful attempt to curb terrorism has to address Saudi Arabia else any attempt will have no tangible results.

Their official version is that the terrorists want to destroy the House of Saud and remake the Middle East but in reality they have adopted the dual policy of encouraging the jihadis as a useful tool of anti-Shia influence abroad but suppressing them at home as a threat to the House of Saud themselves. It is this dual policy that is increasingly being exposed over the last year.

Whenever Saudi Arabia acted against terror group, it was due to the domestic threat to the ruling family and not because they wanted to end the menace of terrorism.

It seems that this human rights abusing dictatorial regime of House of Saud has created a Frankenstein’s monster over which it is rapidly losing control. As for House of Saud, it will have to regret its act as jihadi social media have started speaking of the House of Saud as its next target.

Any meaningful attempt to curb terrorism has to address Saudi Arabia else any attempt will have no tangible results. The so called effort in Syria, Iraq, Libya or Lebanon is just an eye wash. The real problem remains Saudi Arabia (House of Saud in particular) and needs to be addressed holistically.