Rohingyas a ‘Threat’ to National security 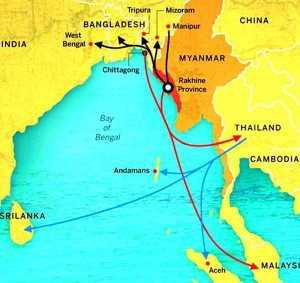 The Rohingya crisis originating from Myanmar has caught the eyes of international arena. Voices of criticism against Myanmar could be heard from around the world but realities and intricacies seem to be different. The reason for this widespread condemnation is the recent crackdown and repression operation launched by Myanmar army against Rohingya Muslims in Rakhine State in country’s north western region which resulted in to the exodus of Rohingyas to Bangladesh. Till date nearly 400000 Rohingya refugees have fled from Myanmar and reached Bangladesh. Myanmar has come under severe attack from United Nation, US State Department, Government of Bangladesh, Government of Malaysia, Arab countries and groups of amnesty international etc. This has been considered as crime against humanity and even the United Nation General Secretary Antonio Guterres compared this crisis to a “humanitarian catastrophe.” But the events and circumstances, which led Myanmar government to take this extreme step, need evaluation.

Prior to the Myanmar government’s repressive policy and institutionalized discrimination , extremist wings of Rohingyas had attacked nearly 30 police posts and army base camp in Maungdaw district of Myanmar with 71 deaths ensuing. Rohingyas were even involved in attacking border ports, blowing bridges and killing policemen. But before judging all the possibilities, we need to know that who are these Rohingyas? Also the reason for Myanmar’s oppressive assault on them and also more pertinently, government of India’s skeptical and suspicious outlook towards them. More importantly, the menace of national security linked with them also need to be looked.

The word Rohingya means the inhabitant of Rohang, which is a Muslim name of Arakan. They belong to an ethnic Muslim minority group in Myanmar. In the early 19th century, East India company had extended its presidency to Arakan. So there were no restrictions and curtailment on interstate traveling as they were the part of one British India. British encouraged and backed the settlements of the Bengali inhabitants from Chittagong region of East Bengal to the most fertile land of Arakan to earn their livelihood as farm labourers. As a result, thousands of Bengali Muslims from Bengal reached via sea route and got settled there. Even after world war II, migration from Chittagong to Myanmar(then Burma) continued resulting into large scale settlements in Buddhists areas.

When the movement of formation of Pakistan was going on in undivided India, these people considering their religious and geographical affinity with East Bengal, organized a movement to merge with East Pakistan. They wrote a letter to Mohamed Ali Jinnah (a founder of Pakistan) for support and help for merger of Mrauk region to East Pakistan. But Mohamed Ali Jinnah never agreed to their proposal. He was reluctant to interfere in Myanmar’s internal affairs.

Inspite of these, the civilian Govt. when came to power after Myanmar’s independence on 1 Jan 1948, recognized them as one of their indigenous community and most of Rohingyas were also given important positions in government set up. But their animosity and abomination towards Buddhists who were staying with them in Rakhine state continued. Besides they also tried to change the demography of that region by increasing their growth rate.

As per figures given in Myanmar’s census report, their population   growth rate was way ahead as compared to those of Buddhists. As a result, in 1982 military Junta of Myanmar (then Burma) had passed a resolution in declaring Rohingyas as illegal immigrants from Bangladesh and started deporting them to Bangladesh, Malaysia, Pakistan and India.

Till date nearly 439000 Rohingyas refugees are staying  in Bangladesh and around 40,000 Rohingyas  have entered into India and staying in the outer skirts of Jammu,  Samba and Kathua districts of Jammu and Kashmir state, Haryana, Delhi and Rajasthan. Their inhabitance in large numbers near International Border of Jammu province has raised many eye brows and also sent alarm bells to the security forces regarding the nefarious designs of rogue neighbour Pakistan, who is bent upon to export terror in Jammu and Kashmir State.

Their presence near the border will serve as bases/transit facility for foreign terrorists who infiltrate into  India to carry out subversive activities.  Recent arrest of hard core mujahideen, Samiun Rehman a British national and a henchman of Al- Qaeda and Al-Noora commanders from Vikaspuri-Delhi is an eye opener for everyone. His mission was to establish bases in Delhi, Manipur, Mizoram for radicalization of Rohingyas and to wage a war against Indian security forces and Myanmar army.

Besides, Jaish e Mohammed chief Maulana Masood Azhar has come in open support of Rohingya Muslims who are staying in Jammu and Kashmir state especially in Jammu province. Besides these Rohingyas have been found to indulge  in  crime, trafficking and there are a number of FIRs lodged against them in certain police stations. Even Bangladesh minister Mohammed Shahriar Alam made statement on terror connection of Rohingyas and  possible links between Akaran Rohingya Salvation Army (ARSA) with terror organisations and expressed grave concerns about their presence in Bangladesh.

As per his statement, Rohingyas also pose security threat to Bangladesh and so Bangladesh government has restricted their movement only up to the “designated areas” for them.

The above information endorses government’s stand and it’s concerns regarding these Rohingyas and the serious threat they will pose to national security, if  timely action for their deportation is not initiated. It is surprising that in spite of all this, some political pundits in India and influential persons from one community are openly supporting and calling India intolerant for refusing to take in Rohingyas, where as many Muslim countries have refused to take them. They must realize that National security and integrity of the country is supreme and non negotiable.

Instead of giving communal color, they must work with the Govt. to find out ways and means to deport them. Since Govt. of India has neither signed 1951 UN resolution on refugees nor it has ratified  1967 protocols. Therefore the Govt. of India has no obligation towards these illegal migrants who have been brought here through agents/ tout sitting in Myanmar or Bangladesh or within the country.

It is an irony of fate that various intellectuals advocating for these Rohingyas are participating in big debates organized at TV news channels on the basis of humanitarian assistance, human touch, didn’t find it important to utter a word in support for those displaced people of the undivided India who came to Jammu province at mid night 1947 and are living here without any facilities in a pathetic and piteous condition for the last seventy years. They are even struggling for getting the relevant documents to facilitate the provision of quality education and employment for their children.

Moreover, these so called intellectuals and  political leaders never endeavoured to assert and raise their  voice on sentiments of Kashmiri Pandits in the valley who were forcefully driven out of their homes in early 1990 from Kashmir valley. Therefore, it is high time that people in the country must unite with one voice for deportation of Rohingyas who are at present staying in different states of India. For swift expedition of these, first and foremost, the government of India  must evolve a strategy to evict  them from International border and then deport them back to Myanmar in consultation with the government of  Myanmar.

Aung San Suu Kyi the Myanmar state counselor in television broadcast defended the action taken by her Government against Rohingyas and also condemned the human right violation committed by anybody in spite of caste, creed and religion. She further narrated that the modalities for taking them back to Myanmar will be evolved.

Therefore the author is of the view that the problem of Rohingyas must be viewed from the perspective of national security threat and necessary strategy must be evolved   to deport them back to Myanmar.

As far as humanity is concerned, Govt. of India has already promised 700 tonnes of aid to Bangladesh out of which, nearly 55 tonnes have already been sent to Bangladesh. The Security of any nation is supreme and is linked with Sovereignty and Territorial Integrity. Those nations who have compromised security with humanity have always paid heavy price including loss of territory. Therefore all political parties must work in consortium towards finding a solution for the Rohingya issue keeping the security of nation as “prime” rather than driving political mileage out of it.

Courtesy: With permission reproduced from www.dailyexcelsior.com

7 thoughts on “Rohingyas a ‘Threat’ to National security”