Rise of the PLA Navy and its implications for India 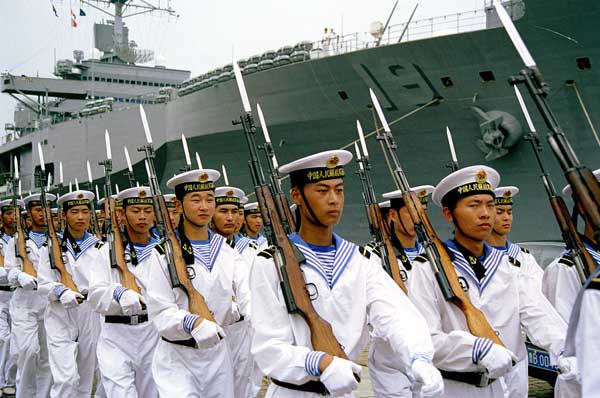 “The traditional mentality that land outweighs sea must be abandoned,” says China’s 2015 Military Strategy, and goes on to add; “In line with the new strategic requirement of ‘offshore waters defense’ as well as ‘open seas protection’, the PLA Navy will shift its focus and build a combined, multi-functional and efficient marine combat force structure.”

In India’s context, its traditionally land-oriented decision-makers have undergone a ‘maritime-awakening’ in the recent past. However, the cause of this epiphany was not the emergence of an enlightened vision…

The Strategy document has merely reiterated the 2012 decision of the Chinese Communist Party (CPC) that becoming a maritime power was essential for China to achieve its national goals and aspirations, and to attain its rightful position in the world order.  China’s pursuit of maritime power has received an impetus from the substantive growth of its overseas economic and security interests, as well as from its long-standing claim on Taiwan and new territorial disputes in the East and South China Seas.

Ever since Xi Jinping designated the maritime domain as an essential building block of his ‘China Dream’, the CPC has brought sharp focus on it, and overseen the systematic build-up in each element of national maritime power.  Today, China is the world leader in ship-building, and its 5000-ship strong merchant marine ranks No.1 in the world.  It also owns the largest number of coast guard vessels that protect the world’s biggest fishing fleet.  Chinese shipyards are rapidly adding to its fleet of modern destroyers, frigates, diesel submarines and logistic support vessels. Its force of homebuilt nuclear submarines has been operationally deployed and its first aircraft carrier is at sea, with more on the way. In a few years the PLA Navy (PLAN) will be second only to the US Navy in capability.

In India’s context, its traditionally land-oriented decision-makers have undergone a ‘maritime-awakening’ in the recent past. However, the cause of this epiphany was not the emergence of an enlightened vision, but a series of disruptive developments in the last three decades. These included the transformative phenomenon of globalization, the drama of rampant piracy, the trauma of a sea-borne terror strike in November 2008 and the specter of the growing PLAN. All of these served to bring focus on India’s navy and on maritime security.

Almost, 55% of India’s trade with the greater Asia Pacific area transits through the South China Sea, giving India a strong stake in the freedom and stability of sea lanes.

Belated realization dawned that the geopolitics of South Asia rendered India as dependent on sea-borne trade and energy traffic as any island nation. India’s exclusive economic zone (EEZ), spanning 2.5 million sq km of ocean and sea-bed area, supplies about a third of its hydrocarbon requirements but contains a huge potential for exploiting other resources that collectively constitute the future ‘Blue Economy’.  Not only does India’s peninsular coastline, studded with many ports, give it a dominant location astride major Indian Ocean shipping lanes, its island territories constitute strategic maritime outposts; with the Laccadive group lying in the heart of the Arabian Sea, and the Andaman & Nicobar Islands ideally located to keep vigil on the vital Malacca Straits.

While India’s crucial position in the Indian Ocean Region (IOR) is widely acknowledged, less well-known are its growing interests in the Pacific.  Almost, 55% of India’s trade with the greater Asia Pacific area transits through the South China Sea, giving India a strong stake in the freedom and stability of sea lanes.

The Indian oil major ONGC Videsh, holds substantial stakes in Russian, Vietnamese and New Zealand offshore hydrocarbon fields; projects that will  become vital elements in India’s  energy strategy.  Thus, today India’s seaborne trade & commerce, investment and diaspora, span an arc extending from Siberia and Oceania in the east to Africa and Central Asia to its west. China’s attempts to dominate the waters of the Indo-Pacific, therefore, represent a grave threat to India’s vital interests and pose a challenge in the maritime domain.

Dialectical discourses apart, amongst the more realistic indicators of a nation’s strength, as well as its intentions, are its GDP and defence budget. Whereas India ranks 7th globally with a GDP of USD2.1 trillion, it is outstripped by China, ranked No. 2, with a GDP of USD11 trillion. China’s stated expenditure on defence for 2017 is USD152 billion; dwarfing India’s allocation of USD 53 billion.  While India has, historically, allotted a miniscule portion of the defence pie to its navy – this year’s share being just 14% – much of China’s recent defence expenditure has been devoted to the development of the PLAN as Beijing looks far beyond its shores. These figures clearly illustrate India’s severe fiscal limitations as far as resource allocation is concerned.

…India’s naval leadership has steadfastly striven for the creation of a strong and balanced 3-dimensional navy with indigenous roots, and such a force will be a reality within a decade or so.

China, translating its enormous economic gains into coercive military power, expects neighbouring nations to voluntarily submit to its hegemony. A manifestation of its belligerence is the campaign of ‘cartographic expansion’ that it has mounted through the ‘9-dash line’ in the South China Sea and repudiation of the 1914 McMahon line on the India-China border.  China’s Indian Ocean footholds, dubbed the ‘string of pearls’, are meant to provide it a network of port facilities, which could support long-range maritime operations. The ‘One Road One Belt’ and the ‘China-Pakistan Economic Corridor’ initiatives pursue an even more ambitious agenda by creating an arc of Chinese maritime and economic influence across the Indo-Pacific.

While budgetary outlays have their significance in strategic posturing, the keystone of a nation’s security rests on its strategic culture.  The spectacular rise of China, as an economic, nuclear, land and maritime power, is attributable to the perspicacity and distant vision displayed by its post-Mao leadership.  In India’s case, the sheer intensity of political activity, and preoccupation of its ruling elite with interminable election campaigns and political survival has, unfortunately, prevented them from applying themselves to strategic thinking or planning.

Notwithstanding this lacuna, India’s naval leadership has steadfastly striven for the creation of a strong and balanced 3-dimensional navy with indigenous roots, and such a force will be a reality within a decade or so.  The Indian Navy (IN) has also created its own roadmap via the 2015 Maritime Military Strategy, whose contours are shaped by three major factors, namely; the need to protect India’s national interests, resources and diaspora; to underwrite India’s ‘strategic autonomy’ by supporting foreign policy; and to assure safety of trade and energy transit by upholding freedom of the seas.  However, the Navy’s worthy endeavours notwithstanding, India’s ability to counter the rise of PLAN and its maritime security will remain sub-optimal, for three major reasons.

…even as we lament the significant maritime inroads made by Chinese diplomacy in the Indo-Pacific, there are many Indian initiatives suffering from benign neglect…

Firstly, we need to acknowledge the paradox whereby, India having attained the status of a global economic entity and a nuclear weapon state, is still struggling to become a significant industrial power and a major trading nation.  This has led to the anomalous situation wherein India possesses one of the world’s largest militaries, but struggles to support its operational and maintenance needs through massive hardware imports. Such a situation clearly undermines the credibility of India’s military, but will take years to rectify.

Secondly, India’s decision-makers have failed to comprehend that the Navy, by itself, constitutes just one pillar of the country’s maritime capability, and without the rest of the structure to complement and provide support, the edifice of India’s maritime power will remain hollow.  Despite exaggerated claims by government agencies, India’s ports and infrastructure remain underdeveloped, our shipbuilding industry is sluggish and backward, merchant shipping grows at a snail’s pace, sea-bed exploitation is stagnating, and human resource development in the maritime sector is inadequate.  A lack of strategic vision and planning, coupled with bureaucratic inertia has resulted in the failure to develop these essential components of maritime power that undergird our trade-dependent economic progress.

Finally, even as we lament the significant maritime inroads made by Chinese diplomacy in the Indo-Pacific, there are many Indian initiatives suffering from benign neglect; two prime examples being the Indian Ocean Rim Association and the Indian Ocean Naval Symposium. The Navy’s significant foreign cooperation outreach to maritime neighbours has often been plagued by delays due to a lack of synergy between Naval Headquarters, the Ministry of Defence and the Ministry of External Affairs. For such programmes of vital national interest to succeed, India needs to adopt an integrated ‘whole-of-government’ approach, in which sailors, diplomats and the defence bureaucracy can resolve differences around a table and act synergistically.

It is noteworthy that China, for all its maritime prowess, has refrained from declaring itself a ‘maritime power’ because of certain perceived deficiencies.  It behooves India, which has already donned the mantle of ‘net security provider’ in the Indian Ocean, to urgently conceive a national level strategy whose faithful implementation will create urgently-needed capacities in the maritime sector that will benefit our economy and reinforce maritime security.