From the outset, USSR and China have had a dedicated logistic branch to support the military. The erstwhile Soviet military had a dedicated Marshal of Soviet Union as Deputy Minister of Defence, responsible for the logistics of the entire Armed Forces. He was also the coordinating authority at the national level.

Indian military is perhaps the only modern armed forces in the world, which has the distinction of not believing in a joint logistics organisation.

In the case of the Army, the support Services are responsible to provide the requisite logistics to the combat arms. Today, these services come under four different Principle Staff Officers (PSO), to the Chief of Army Staff (COAS). 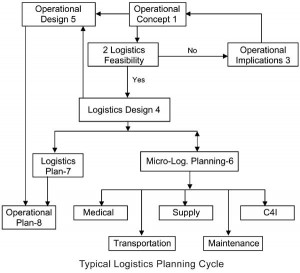 Presumably, the above arrangement is an interim one–till such time as appropriate reorientation takes place and logistics become fully integrated. Ideally, emulating the British Army model would serve the purpose. This would be the most difficult step to take–bearing in mind the large momentum and the deep historical baggage, requiring a change of direction. 2

The Army has now, also taken the next bold step of computerisation of the logistics management. CICP of the Army Ordnance Corps (AOC) was sanctioned in 2001.

Army’s initial attempt was to have a customized system of CICP. Early this year, however, it was decided to change course and proceed with a decentralised solution – adopting a commercially available Enterprise Resource Planning (ERP) route. The system has a modular architecture and can be built up as one goes along. And with experience, the system can be easily upgraded, in line with the technology of the time. The Request for Proposal (RFP) for this is expected to be finalised shortly.

In the case of the Air Force, single point responsibility for conventional logistics management lies with the Air Officer in Charge Maintenance (AOM) at the Air HQs. The material management and physical distribution function is performed by the Logistics Branch. Maintenance of aircraft and equipment being the responsibility of Air Engineering Branch (Mechanical)/(Electrical). The overall responsibility rests with the AOM.

In an environment of shortages, centralised control is inevitable. It is considered that the advantages of transparency, and allowing on-line data access to lower formations on real time basis, far outweigh the perceived disadvantages.

To facilitate logistics activity of IAF – a customised IMMOLS was developed. The facility establishing audit compatibility was inaugurated recently by the Raksha Mantri (RM). Also, the emphasis of the prime user of IMMOLS seems to be more towards central control.

In an environment of shortages, centralised control is inevitable. It is considered that the advantages of transparency, and allowing on-line data access to lower formations on real time basis, far outweigh the perceived disadvantages.

The US Navy (USN) and the Indian Navy (IN) cadre structure are poles apart. In the USN, the line officer, heads all departments on board a ship. One day he could be an Engineer Officer, and on another, he could be a Navigator/Gunnery/Communications/TAS/Executive/Commanding officer etc. They are, however, highly dependant for the day-to-day running of the Engineering Department onboard to enlisted technical sailors, NCOs/JCOs.

In the case of IN, on the other hand–the departments are headed by specialist officers. On board ships, there are no horizontal movements possible between the Executive and the Engineer officer. The sailors on board are divided into three categories – the highly skilled Artificer/ Mechanician, the semi-skilled Mechanic and the Seaman. This situation is likely to continue even after the intake of sailors is raised to 10+2 level and that of the officers upgraded to B Tech level for the Executive Branch. Improvement can only come about when Engineering and Electrical (E & L) branches are merged, the logistics function is restructured, and user maintainer concept is implemented in letter and spirit. Alternatively, the US Navy’s “line officer” system would need to be adopted, along with their logistics concept.

The Navy was fortunate, for having chosen the model of in-house design, not only because ““ there were no takers in the industry at the time, but also, because, this had the intrinsic advantage of the Navy (as the user), being fully involved and committed in the design choice ““ from the concept stage to delivery and induction into the service.

The Controller of Logistics (COL) is responsible through the Chief of Material (COM), for most of conventional logistic activity for the Navy. Overall the COM is responsible for the material state of all ships, submarines s/m, infrastructure and equipment. Induction of any equipment / technology into the Navy has to have COMs endorsement. He is also the technical authority for all the Dockyards and Base Repair Organisations. Controller of Warship Production & Acquisition (CWP&A) under VCNS is responsible for all warship production in India and acquisition from abroad. 3

In the area of Design, Development and Production – the Navy has had distinct advantages over the other two services. The indigenisation orientation was the hallmark of all the Chief of Naval Staffs (CNSs) since Independence. The ships and submarines being an integrated fighting machine, with multi-disciplinary functions incorporated within–further facilitate this.

The Navy has graduated, in stages from designing and building small ships and sophisticated destroyers to an aircraft carrier and a nuclear powered submarine. To achieve this end, the Navy started training naval designers abroad from the early 1950s. An in-house, multi-disciplinary, Design Bureau was also set up.

The Navy was fortunate, for having chosen the model of in-house design, not only because – there were no takers in the industry at the time, but also, because, this had the intrinsic advantage of the Navy (as the user), being fully involved and committed in the design choice – from the concept stage to delivery and induction into the service. All the stakeholders had full opportunity to have their say, at each stage. Backing out of any project mid-stream was out of the question, since every step was a corporate decision, supported with requisite funding. Any delay in freezing the design or thereafter, requiring changes in equipment/weapon package would naturally result in cost/time over-runs. Today, the order books of all PSU shipyards are full. To make up for their poor productivity, there is an urgent need for adopting modern modular construction methodology and multi-skilled workforce. Also, emerging private sector shipyards need to be encouraged to provide the much needed competition.

Due to lack of such long-term commitments, vision, and frame of mind, the Army and the IAF, are still struggling to induct their first indigenous Main Battle Tank (MBT) and Combat Aircraft into respectively.

Standardisation and codification is the key to efficient and effective logistic management. Almost from the outset, the Soviet Union had, to a great extent, universalised their standardisation process. Even in late 1960s, one could find the same prime mover, being used in different warships and ashore for power generation, and same being employed for driving heavy duty specialised commercial/military vehicles and common tractors for plowing the fields. Also, HP air compressors, common motors, pumps and communication equipment were used across the board, for multifarious end use.

2 thoughts on “Revolution in military logistics”