Everyone on the streets today is talking about globalisation. In military circles, there is much talk about Revolution in Military Affairs (RMA). The military is also going full steam ahead on hardware acquisitions, but when it comes to Revolution in Military Logistics (RML), most, particularly in the military circles, are in a denial mode. The intention here is to try and bring about a change in outlook on this very important area that is taken for granted.

The raison d’être for any military logistic system is to ensure that the correct item and service is provided to the end user, at the right time, place, and in correct quantity and quality required for the situation.

Indian Armed Forces have, however, continued to grow, basically under the same original framework. One major restructuring was attempted post Kargil War. Even that has remained still-born due to lack of political will to appoint the Chief of Defence Staff (CDS).

In the final analysis, most military campaign failures, could be attributed to mismatch between the operational plan and the logistic support capabilities. This could be well illustrated with examples of over-stretched logistics, from world military history.

In context of integrated logistics, the weakest chink in the Indian armour today is that of the Army. It must first achieve intra-service integration. To enable that, the most essential prerequisite is the computerisation of the logistics. This should be accompanied in parallel by restructuring of the overall organisation.

This by no account means that the present set up is not delivering. What it means, is, that by restructuring, the future challenges could be met more effectively, speedily and efficiently, both in material and human terms.

At the same time, and inspite of serious handicaps, the most encouraging part, is that the Army, seems to be the most open and willing service to take on this challenge.

In this context, the Navy and the Air Force are far ahead of the Army. They have kept pace with each other in bringing about organisational changes linked to RML. The Air Force is perhaps a hair-breadth ahead in the conventional logistic management arena. But in the Capital Acquisition and Weapon Platform Development Management – the Navy is way ahead.

The need of the hour is to work in unison and share one’s experience and expertise to move forward.

At the time of Independence, the Indian Army, the Navy and the Air Force, inherited their organisational structures from their respective parent service in UK. Since then, the British system has undergone a sea change.

Indian Armed Forces have, however, continued to grow, basically under the same original framework. One major restructuring was attempted post Kargil War. Even that has remained still-born due to lack of political will to appoint the Chief of Defence Staff (CDS).

In this context, it is essential to look at other models and draw suitable lessons, appropriate to the Indian environment. In this regard the National Security Council Directive–2000 is relevant.1 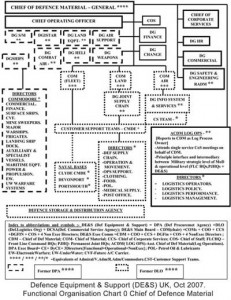 In the last fifty years the British system has undergone series of changes in the following sequence:-

The functional chart of CDM is illustrated in the figure.

It would be observed that the organisation has two major Divisions.

The overall MoD (UK) set-up, with the CDM subset incorporated therein, is illustrated at Fig. 2 below.

It would be observed here, that the CDM is a four star general/equivalent, same as the Chiefs of Naval/General/Air Staff.

In the Indian context, if adopted – this would essentially mean delegation to the CDM (I) the responsibility and empowerment of the following existing authorities:-

Though desirable and pragmatic, in the Indian context, this does not appear to be feasible in the near future. 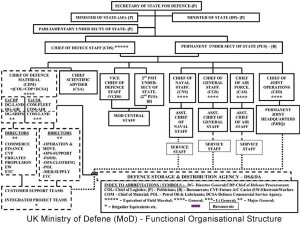 Functionally, the US, French and the British systems are similar to each other. All of them have created a dedicated logistics cadre. The US and British armies have opted for inducting officers at the junior levels from the QM and MGO’s branches into the logistics branch. But they have been allowed to retain their parent branch status and specialisation – to enable them continuity, promotional prospects, and also to retain their skills and emotional/regimental bonding with their original branch.

The French and the Germans have an Armament Branch separate from the Combat Arms. The point to note here is, that in all these countries, the promotion prospects in the Combat Arms and the Support Services are comparable.

2 thoughts on “Revolution in military logistics”