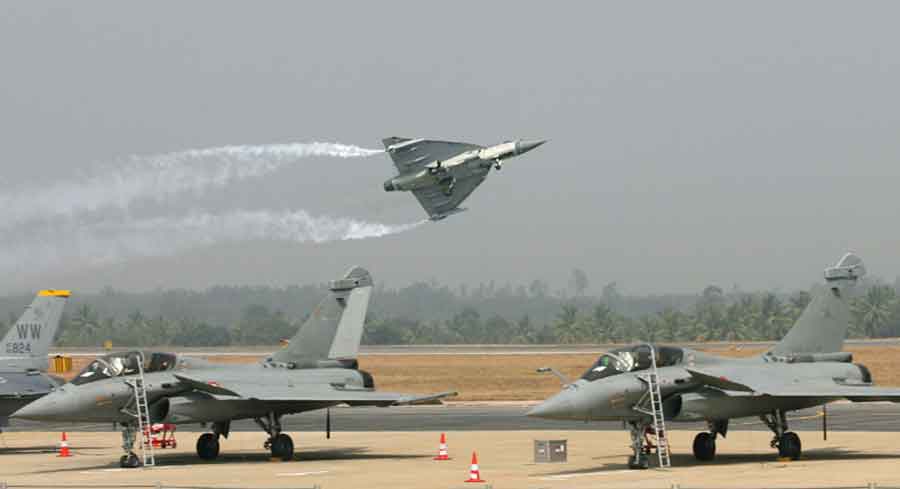 The essence of military endeavour in battle is to pose asymmetric threats to which an adversary has no credible response. Such asymmetries can be created through differentials in technology, doctrine or organisation. An example of US technological superiority was on display in the two Gulf Wars and in US operations in Afghanistan, which enabled early success, though a combination of other factors prevented military success from being converted to a political victory. In the Indian context, the nation continues to face both conventional and non-conventional threats from its two inimical neighbours, the threats manifesting the entire spectrum of conflict on land, in the maritime domain, in the air and in space and outer space. This bespeaks the need to have a strong defence architecture to negate all such threats.

A strong defence industrial base is an essential requirement for India’s security and well being. A thrust towards this end was made soon after independence in certain key segments in the strategic domain. India’s first nuclear reactor, Apsara, which was indigenously designed and built, went into operation on 04 August 1956, with nuclear fuel supplied from the United Kingdom under a lease agreement. Since then, India has made huge strides in the field of nuclear technology. India also initiated space research activities in the early 1960s, and is today an acknowledged space power, with ability to launch multiple satellites—from Low Earth Orbit (LEO) to Geostationary Orbit (GEO) and everything in between. The Indian Space Research Organisation (ISRO), established on 15 August1969, is today, one of the six largest space agencies in the world. It now functions under the Department of Space (DOS) and the Space Commission which were set up in 1972.

India’s guided missile development programme is yet another success story. It began in the early 1980s and today, India has developed all types of missile systems including ballistic, cruise, anti-ship, air-defence, air to air and anti-missile systems. From the short range Prithvi Series surface-to-surface missiles, to the Agni ‘V’ ICBM, which has been inducted into the armed forces, a whole range of surface to air and air to air missiles are in use by the Indian military. India is one of seven countries in the world with ICBM capability and one of four countries with anti-ballistic missile systems. Since 2016, India has been a member of Missile Technology Control Regime (MTCR).

However, despite having a large defence public sector, there have been serious weaknesses in the indigenous production of land systems, as well as platforms for the Navy and the IAF which has impacted India’s defence capability. Since the last seven years, however, we are seeing a distinct change in government policies, which are now aiming to establish a strong and vibrant defence industrial base.

Towards this end, the Finance Minister, in the budget he presented for 2018-2019, announced the setting up of two defence industrial corridors, one in Tamil Nadu and the other in Uttar Pradesh, to achieve self-reliance in the aero-space and defence sectors. Production of defence equipment by the private sector comes with its own set of challenges as the customer base is limited, there is a sensitivity attached to such production, gestation periods are long and they need heavy initial investment to fructify. The progress till date has been slow, largely due to the onset of the pandemic in early 2020. Nonetheless, Tamil Nadu has unveiled its plans to establish an ecosystem to make Tamil Nadu the manufacturing and service hub for the entire aerospace and defence industry of the country, to include both the established large players in the defence sector as well as emerging startups. With the pandemic now receding after the onset of the third wave, a fillip needs to be given to make the defence corridors functional in an early time frame.

In Uttar Pradesh, 1,480 hectares of land have already been acquiredfor the Defence Corridor. With the elections getting over shortly, the next government will have to move with speed and commitment to get the corridor to functionality in an early time frame. As of now, IIT Kanpur and IIT Banaras Hindu University Varanasi have been roped in for establishment of Centres of Excellence related with Defence Industrial Corridor, Brahmos Aerospace has proposed to set up a unit in Lucknow with Rs 300 crore investment to manufacture missiles and a missile manufacturing unit is also proposed to be set up at the Jhansi node. About 90 percent of the land required for the corridor—1480 hectares—has so far been acquired of which a total of 74 hectares has been allotted to 22 companies in Aligarh, Kanpur and Jhansi. Post the election results in March 2022, the next government will have to work on a war footing to get the corridor to full functionality. Both the defence corridors have the potential to catalyse indigenous production of defence and aerospace-related items and promote growth of private domestic manufacturers, MSMEs and startups in the defence sector.

Self reliance in the aviation sector is vital for India, to reduce its dependency for advanced platforms from external agencies. It was tragic that India abandoned its first indigenous fighter aircraft, the HF 24 Marut, manufactured by HAL, on extraneous grounds. Had we continued to develop the aircraft with upgrades, we could possibly have been one of the major powers in the aviation sector today. There have been delays in the Light Combat Aircraft (LCA) programme that began in the 1980s as a replacement for the MiG-21 fighter aircraft, but the programme has yielded the Tejas fighter—an indigenous fighter aircraft for the IAF and the Navy. This project needs to be fully supported by all the agencies concerned, as only then will India have a viable aviation base. While an additional factory to double aircraft production is being set up, India needs to do much more to enhance production capability as the aircraft has excellent export potential too. The private sector needs to be co-opted in a big way for the supply of components which could assist in increasing production capacity. Alongside, the AMCA (Advanced Medium Combat Aircraft) project also needs to be given greater impetus, as this is India’s 5th generation aircraft under development. The Light Combat Helicopter (LCH), developed both for anti-infantry and anti-armour role is another success story as well as the Dhruv—a utility helicopter. Focus now has to be on enhanced production and exports.

But the aviation sector is not only about fighter aircraft. India needs to consider manufacture of passenger aircraft. While it may not be feasible to reinvent the wheel, it could be possible to get a jump start by simply acquiring the IPR of a product which is in the market, such as the Embraer passenger aircraft. Alongside, India could look into supersonic passenger aircrafts—the next generation of passenger aircrafts which will transform aviation. There is a market for commercial travel which can halve the time for long distance flights. Development of such aircraft can transform and redefine the airlines industry as we know it today and it would be to India’s advantage to jump on the bandwagon of this exciting new technology.

The defence sector is gradually being opened to the private sector, which is the need of the hour. While a great deal of time and resources have been expended on the public sector, it still lacks the capacity to meet even fifty percent of the requirements of the Armed Forces. To reduce imports, it is vital that the private sector be roped in, in a substantial manner. Great success has been achieved in certain sectors such as the manufacture of artillery guns, where 100 K9 Vajra Self Propelled guns have already been delivered to the Indian Army. These guns were manufactured by L&T in collaboration with Hanwha Defence of South Korea. The ATAGS (Advanced Towed Artillery Gun System), produced by DRDO in collaboration with Bharat Forge, Tata Power SED and Mahindra Defence Naval System, has been approved for procurement by the Indian Army. It is important that the Indian Army continues with the indigenous route, for only then can the local industry be enabled. Over time, we need to develop own IP for all platforms for the mechanised forces, artillery guns, drones, radars, communication equipment, etc, and the private sector can play an important role in such development.

There is also a need to enable the growth of the SMEs and MSMEs (Micro, Small and Medium Enterprises). Here, it would be instructive to look into the Mittelstand Model. These were small family owned businesses which achieved unprecedented efficiencies by designing a business model with a razor-thin focus and learning to do the one thing really well. Most importantly, they were given an enabling environment by the Government, and these small enterprises soon became world leaders. The strategy adopted was global niche dominance and world class performance in core sectors. While the Government of India is keen to promote the growth of the SME and MSME sectors, the enabling environment will have to be created by the bureaucracy which must be in sync with the larger aims of creating a strong defence industrial base.

Two additional issues need attention. What India needs is technology, but as of now, there is no institutionalised approach to acquiring the same. Structures for the same need to be built for acquiring strategic technologies. The second issue pertains to leadership. The Ordnance Factory Board has been dissolved and the 41 ordnance factories it controlled have been converted into seven defence public sector undertakings (DPSU). These seven new DPSUs to be effective cannot be run on the leadership style as existed earlier. Perhaps the time has come to infuse them with leadership from the corporate world, injecting into the system fresh ideas and accountability and a work culture which is focussed on results, output and profitability. If the seven new DPSUs can be made to perform like the private sector, it will give a huge boost to the Atmanirbhar Programme in the defence sector, especially as the government has opened the defence sector to exports. If India can export the BrahMos missile to Philippines, then there is really no bar to export any other piece of defence equipment to friendly countries.

In conclusion, a lot of enabling legislation has been made and the private sector is gradually becoming an important player in India’s defence sector. There is an underlying sense of optimism, but ultimately, the user, that is the Armed Forces, the manufacturer, the research organisations and the decision makers—the political and bureaucratic authority, will have to work with each other in a spirit of cooperation, to achieve the desired results. Synergy between these components will act as a force multiplier and will enable India to be a major player in the defence segment within a decade.