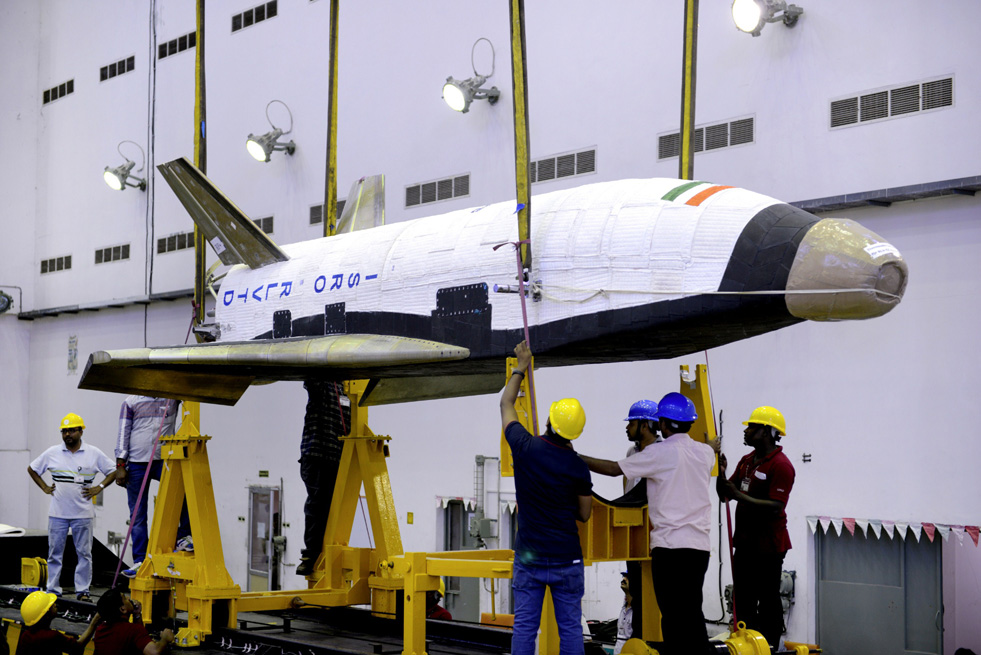 Indian Space Research Organisation (ISRO) on 23 May 2016 successfully pulled off the maiden test flight of the Technology Demonstrator (TD) version of the Reusable Launch Vehicle (RLV) in a preliminary but significant step towards realising a home-grown reusable space vehicle capable of sending satellites into the orbit around the earth and return to the ground. For this challenging and first ever mission of its kind, ISRO deployed a delta winged aerospace vehicle. ISRO Chairman A.S. Kiran Kumar described it as a near perfect mission about which ISRO had full information through the telemetry system at every stage of the flight launched from the Indian spaceport in Sriharikota on the eastern coast of the country.

After successfully surviving the high temperature of re-entry with the help of its thermal protection system (TPS), RLV-TD flawlessly glided down to the pre-determined landing spot, described as virtual runway–over the Bay of Bengal at a distance of 450-km from Sriharikota. Significantly, the new and novel technologies developed for this mission included the composite movable fin, flush air data system to measure the surface pressure on the vehicle in flight, on board computer, high resolution data acquisition system, lithium ion battery, patch antennas and radar altimeter. To its credit ISRO was able to achieve the separation of the vehicle from the booster attached to it at a specified altitude with a high degree of precision. All said and done, to realise the goal of developing an operational reusable launch vehicle, ISRO would need to further accelerate research and technology development in areas such as propulsion, materials, structures and vehicle configuration.

The  winged RLV-TD  aerospace vehicle, after its smooth take off from the first launch pad of Satish Dhawan Space Centre, [VG1] was pushed to a height of 56-km by the 9-tonne heavy solid fuel driven HS9 booster attached to it. At that point, the vehicle got separated from the booster and moved up to a height of about 65-km as a prelude to its descent into the Bay of Bengal. The major objective of this mission was to test the capacity of the vehicle to withstand re-entry at a speed higher than 5 Mach. The navigation, guidance and control system accurately steered the vehicle during its critical descent phase. In this flight, vital technologies such as autonomous navigation, control and guidance as well reusable thermal protection system and re-entry management have been successfully validated.

K. Sivan, Director of the Thiruvananthapuram based Vikram Sarabhai Space Centre (VSSC), the largest Indian space establishment, which spearheaded the development of RLV-TD vehicle, was quick to point out that this was “just the first baby step towards the big Hanuman leap”. On a conservative estimate, it would take ISRO more than a decade to put in place an operationally viable reusable launch vehicle. “There are many technology challenges that have to be overcome before we have an operational RLV”, Sivan said.

A series of flight tests will need to be carried out to help ISRO evaluate various technologies going into RLV. The Hypersonic Flight Experiment (HEX) of 23 May will be followed by Landing Experiment (LEX), Return Flight Experiment (REX) and a Scramjet Propulsion Experiment (SCPE). However, the futuristic flight missions of RLV-TD are expected to land on a runway at Sriharikota island. To this end, the RLV-TD vehicles in the future will be equipped with an under carriage. Though the immediate term objective of the Two Stage to Orbit (TSTO) reusable space vehicle is to bring down the cost of accessing space, through technological augmentation it can also be pressed into service for manned missions.

Moments after this historic space mission, the first for ISRO, Prime Minister Narendra Modi hailed the successful flight of this swadeshi space shuttle with the statement that “launch of India’s first indigenous space shuttle RLV-TD is the result of the industrious efforts of the space scientists”. The winged RLV-TD vehicle weighing around 7.5-tonne and of the size of an SUV (Sports and Utility Vehicle) is one sixth of the size of the final version of the reusable space vehicle envisaged by ISRO. The RLV-TD involving an investment of Rs. 950-million exemplified the toil of 600 scientists and engineers of ISRO spread over a period of five years. As it is, the winged RLV-TD vehicle has been configured to serve as a test bed to evaluate various technologies including hypersonic flight, autonomous landing, powered cruise flight and hypersonic flight using air breathing propulsion.

There is no denying the fact that the maiden RLV-TD mission is yet another feather in the cap of the Indian space programme which has been sweating it out to sustain India’s leadership position in space exploration. As far as opening up the frontiers of cutting edge technologies to give a novel edge to the fast moving Indian space programme is concerned, not even the sky seems to be the limit for ISRO. Not surprisingly then, ISRO is fully well convinced that with a fully operational reusable space vehicle in place, it would be possible to cut the cost of accessing the space by as much as ten times. For ISRO, RLV is India’s unanimous solution for low cost reliable and on demand space access.

In the ultimate analysis, the ambitious Indian project for developing of a home grown reusable space vehicle assumes significance in the backdrop of the fact that not long back the US had abandoned its space shuttle described as world’s first ever reusable space vehicle because it was found to be far from safe, prohibitively costly and technologically unsound. In fact, space shuttle is known to have killed more people than any other launch vehicle in the history of space exploration. And finally in July 2011 USA was left with no other option but to bid it good bye.

However, disintegration of Soviet Union implied the termination of this ambitious project. Though China has not officially unveiled a plan for a reusable space vehicle, it is already working on the technological elements vital for assembling a reusable space vehicle. Hypersonic gliding vehicle is one instance where China is mastering some of the technologies going into a reusable space system. Earlier this year, a Chinese military expert had revealed that it is planned to develop a space plane named Shenlong which is essentially meant to reinforce China’s missile and space warfare capability. And as things stand now, China will not find it difficult to put in place an operational reusable space vehicle for commercial applications.

The message and meaning of 23 May RLV-TD flight is that India is on its way to becoming a major space power and that space is no longer dominated by US and Europe. It is not for nothing that President Pranab Mukherjee in his message to Kiran Kumar had observed, “The launch of RLV-TD is an important achievement made by ISRO that takes India into the ranks of the leading nations of the world with space shuttle capabilities”. Indeed, with the flawless debut flight of RLV-TD India has joined the elite global club composed of leading space faring nations like US, Russia and China. In this context David Wireman, a Dallas based Managing Director and Aerospace Expert at the consultancy firm Alix Partners LLP observes, “While India’s effort is behind the likes of SpaceX and Blue Origin, there are still others further behind and all of the solutions remain to be proven, both technically and from cost perspective. Although the technical hurdles are quite high, it is reasonable to believe India can be successful”.

Indeed the successful RLV-TD mission marks a giant leap for the Indian space programme which took in a very modest way with the launch of a 9-kg sounding rocket, way back in 1963, from Thumba Equatorial Rocket Launching Station (TERLS) at the fishing hamlet of Thumba on the outskirts of Thiruvananthapuram, currently the hub of India’s launch vehicle development programme. In a way, the successful realisation of the Indian reusable space vehicle would be a shining tribute to the former Indian President, a widely acknowledged space and defence scientist, Dr. A.P.J. Abdul Kalam. Kalam, who, as the architect of India’s first civilian space vehicle SLV-3, had consistently advocated the need for India to reduce the launch cost by putting in place a swadeshi reusable space vehicle. – See more at: