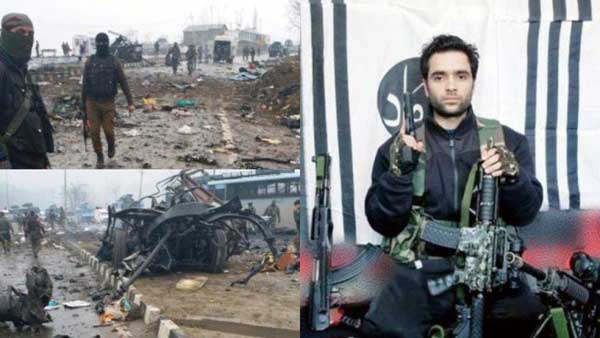 Forthright action should now replace the sheer bombast that drives political and social discourse in India, regarding wanton acts of terror against soldiers, security men and civilians alike. What could have been more horrific than a home bred jihadi blowing up 40 CRPF troopers to bits in Pulwama near Srinagar the other day, soon after the exaggerated hype on Uri, the Bollywood styled surgical strike? Even then there is nothing to restrain a fringe of rabid anti-nationals, masquerading as opinion makers, from maligning the Indian Army day and night, in justification of their fanatical ideology.

The political establishment routinely expresses solidarity with the martyrs’ kin, besides decrying the perpetrator, more as a mere formality than any real intent. The government backs down when it comes to avenging their deaths and sending an unmistakable message across the border.  It also feigns ignorance about the actual location of Dawood Ibrahim when a Delhi based journalist easily calls up his wife in Karachi. Who permits a psychopath like Yasin Malik to roam free when he has admitted to killing four IAF personnel in an interview with BBC’s Tim Sebastian?  Or a mass murderer like Masood Azhar, whose Jaish-e-Mohammed masterminded attacks on Parliament (2001), Uri, Pathankot (2016) and Pulwama (2019).

What is even more reprehensible is that a senior representative of the ruling dispensation, in a popular prime time debate last Saturday, vehemently questioned the anchor’s demand to withdraw security cover from a former CM, herself a major source of separatism. Even the much touted surgical strike, staged as a sop to public sentiments but a great tactical success in its own right, also failed to subdue a defiant Pakistan.  Stripping a handful of separatists of police protection, as the government has belatedly done, is not enough. Neither will it restrain the ISI in future, unless there is a total clampdown on diplomatic and trade ties, infiltration and terror funding and especially the abolition of Article 370, the fount of all that is radically wrong with Kashmir.

The rogue state, for a change, must be bled and made to feel the pain it has been inflicting on a passive neighbour. Pakistani actors must be permanently barred from working in India, besides suspension of all social events and interchange of artistes for five years. The Dragon has persistently stonewalled India’s request to declare Masood Azhar a global terrorist, even though it is sitting on a gigantic balance of trade with India, amounting to $ 63 billion in 2017-8, the highest in the world after that of the US. Beijing must be firmly told that it could risk a drastic curtailment of imports if it does not act against Azhar.

What is the point of having prime time debates when news channels, ostensibly standing with the nation, play a double game by welcoming panellists with dubious antecedents, in the name of democracy and free speech, but who end up espousing hatred and hostility towards India, all for the sake of TRPs. These shrill, overly aggressive human rights lobbyists paint psychopaths and jihadis as some kind of do-gooders, allegedly fighting the ‘excesses’ of the system. Rowdy stone pelters are defended as well meaning but misguided, but who follow the directives of their masters based in Rawalpindi. Levelling defamatory and unfounded allegations at the Indian Army has become the new norm. Yet they will never utter a word against the ISI, nor of its role in sponsoring terror attacks, the exodus of half a million Kashmiri pandits.

The ISI merrily inflicts death and destruction on our soil with a devastating regularity, secure in the knowledge that its moles will raise the nuclear bogey to deter New Delhi, from any such ‘misadventure.’ The spurious construct, created by the Deep State, has virtually subverted the national will to act. The faceless entity, allegedly comprising a cabal of corrupt politicians, bureaucrats, Lutyens Media, legal experts and predatory arms dealers, is too powerful and too deeply embedded in the system, to be identified, exposed and stamped out of existence.  Even though the entity operates below the public radar, its sinister workings can be gauged only by the malignant effect it produces on the system itself.

Indeed, why does the political dispensation find itself so helpless, after vowing to decapitate 10 of the enemy for every Indian killed, on public platforms?  Is it because of the looming fear of the Deep State, whose tentacles reach into every rung and strata of state-craft, working to protect China and Pakistan from the consequences of their actions?  The entity committed the blackest of perfidies against the Army by planting a fictitious page one report, about an alleged coup attempt in a mainstream daily, with a banner headline.  Especially after the Army Chief challenged the clique of corrupt generals and notorious arms dealers. The million dollar fabrication has turned out to be worth even less than a fistful of trash. It will go down as one of the most sordid chapters in the country’s post independence history.

In a bid to further discredit the Chief, the Deep State also mounted attacks on the very legitimacy of the Technical Services Division (TSD), his brainchild, insinuating that it had snooped on cabinet ministers.  Did the entity orchestrate a murky campaign to shut down the unit and pre-empt it from unmasking the politicians’ diabolical links with Dawood Ibrahim, besides fearing it as a deadly threat to their own existence? One wonders who aborted the timely arrival of Special Action Group (SAG), the NSG’s only military component, in Amritsar, to take down the hijackers of the Indian Airlines flight IC 814, permitting the plane to leave with hostages. Did the Deep State also delay SAG’s arrival in Mumbai during 26/11, to prolong the mayhem and bloodletting?

A terror attack of this magnitude could have been averted, had the TSD not been hastily disbanded under concocted charges, by the previous government that almost surreptitiously gifted away Siachen to Pakistan?  One can only thank the cutting edge unit of the Indian Army, for ensuring peace in the strife torn Kashmir and the North-East, during its all too brief existence. It is believed to have choked off the supply of illicit arms and ammunition to Maoists in Chattisgarh and Andhra Pradesh, sourced from Northeast insurgents and also prevented several Mumbai-like terror attacks.

The small, dedicated band, comprising a commanding officer, five JCOs and 30 other ranks, delivered much more than the combined output of civilian agencies like the RAW, the IB and others, on a annual budget of a ‘measly’ Rs 8 crore!  A David of TSD virtually knocked out the Goliath of the ISI, on a number of occasions. Indian Army men, not IPS officers, succeeded in checkmating the nefarious designs of their uniformed counterparts across the divide.