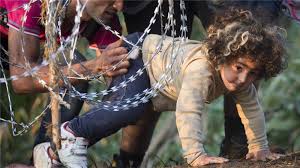 Even as divisions deepen amongst EU member states on how to respond to the rising refugee influx, three narratives have dominated the refugee crisis in Europe. One, that Europe has been part of the causal factors of the problem in the conflict zone countries (of which the refugee crisis is symptomatic), hence it must do its bit to be part of the solution; two, Europe must abide by the ‘tradition’ of hosting refugees and migrants, which is rooted in its culture and history if one looks far back as the last century; and the third relates to the EU and its obligation to humanitarianism and upholding of human values.

The Syrian war and the mass exodus of refugees from the Middle East, according to some analysts, has continued largely due to the US decision to restrain its influence over these matters and in the process ceding space to Iran, Turkey, Russia.

While there have been multiple narratives on the issue, there has been greater disparity on the appropriate approach to address the issue – ranging from the simplistic – ‘It is not our problem’ to a more complex multifaceted approach – one in which accommodating the refugees is just a ‘slice of the solution.’ The latter approach has been articulated most clearly, possibly by UK, which has called for a more holistic resolution of the refugee crisis, which involves amongst other measures, addressing the root of the problem in Syria. Within this approach, there is unanimity on increased targeting of the Islamic State (IS) militants in Syria and Iraq, but there is a dilemma on whether to consider the Bashar al-Assad-led Syrian regime as ‘part of the solution’ or bracket it along with the IS as ‘part of the problem.’

The Syrian war and the mass exodus of refugees from the Middle East, according to some analysts, has continued largely due to the US decision to restrain its influence over these matters and in the process ceding space to Iran, Turkey, Russia. Second, is the EUs’ inability to agree on how to deal with the flow of people (refugees and economic migrants) moving to Europe from the Middle East and North Africa. Geopolitical events have further added to the complexity of the situation, specifically in the region. The Iran nuclear deal is on the cusp of being operationalised, stability still eludes Yemen which is also seeing the involvement of Al-Qaida and the IS, and the Turkish political developments and decision to act against the Kurds (PKK – or Kurdistan Workers’ Party) and IS, are significant events that are increasing regional tensions and prodding realignments.

In Syria, the Assad regime of late has suffered a spate of setbacks on the battlefield despite massive support from Iran and the Hezbollah militia. Syrian regime forces have reportedly lost control of their last air base in the northern Idlib province in fighting with the Al-Qaeda-linked Nusra front and other Islamist militants. Russia has stepped up its arms supplies to the Assad regime, which according to Russia, is as per existing contracts and in full accordance with international law. Russia is portraying its arms deliveries to Syria as supporting the fight against IS, and has painted Assad as a key ally in defeating the extremists. Latest reports indicate Russia is planning airstrikes on the IS from Syria.

Australia and France have ordered airstrikes in Syria as part of solution to the refugee crisis or is it merely a ruse to expedite the fall of the Syrian regime and address some of their own internal problems arising out of Islamic radicalisation?

The heightened emotions and unprecedented public opinion, both positive and negative, in the EU and elsewhere around the globe seem to be not only driving the need for an early and sustainable resolution of the refugee crisis but also precipitating some, otherwise untenable, geopolitical decisions. Australia and France have ordered airstrikes in Syria as part of solution to the refugee crisis or is it merely a ruse to expedite the fall of the Syrian regime and address some of their own internal problems arising out of Islamic radicalisation?

UK wants to take a more holistic approach by not just addressing the migrants/refugee issue but also the root cause driving this exodus. British Prime Minister David Cameron summed up his focus quite pithily saying, “If this is the existential threat and the battle of our generation, we do not appear to be doing much about it.”

The UK will stagger over the next few years the number of refugees it accommodates in the country. It wants to take in refugee from camps in Syria’s neighbourhood, a significant majority being orphan children, in line with its historical position when it took in Jewish children after the WWII as it believes these children would like to go back at some stage to rebuild their country of origin. The decision to accept refugees directly from camps would also put an end to the incentive to undertake unsafe journeys and enable UK to select which refugees to accept, thus avoiding illegal immigrants and IS suspects.

David Cameron also appeared to seize the moment to announce that the British air force had carried out a drone strike against a British jihadist in Syria over the summer; a significant cross-over as UK reportedly became the first European country to use military force to carry out premeditated killing of a specific individual (its own citizen) outside the context of regular hostilities. The action was shown to be initiated by the need to suppress an armed group that posed a direct threat to European citizens.

The Russian move to Syria represents a frontal challenge to US and European efforts to isolate the Assad regime and end the four-and-a-half year old conflict.

In his statement to Parliament, Cameron was explicit that there was “no way of preventing his planned attacks on (the UK) without taking direct action”. British Defence Secretary Michael Fallon made it clear a day later that other similar strikes may follow. Apart from the issue whether targeted strikes are an effective policy against terrorism, the UK’s latest move raises legal and ethical questions associated with targeted killings of its own citizens on foreign territory. Also whether there is sufficient proof that the action was necessary to prevent an imminent threat, as claimed by Cameron. A manifestation of British perplexity in dealing with self-radicalised citizens going to Syria and its inability to devise a socially acceptable returnee policy, perhaps.

Then there was the question of parliamentary approval. The Cameron government had been embarrassed in 2013 when Tory rebels joined with Labour to vote down a plan to launch missile strikes against the Assad regime. Parliamentary authorisation had been given only to UK air strikes against the IS in Iraq. In 2014, the UK, France, the Netherlands, Belgium and Denmark began conducting air strikes in Iraq as part of an international coalition fighting against IS.

French President François Hollande announced on September 7 that France would begin surveillance flights over Syria and that it would be “ready to strike” according to the intelligence obtained. France has taken a position that attacks were being planned in Syria against France, and French airstrikes would be undertaken to pre-empt such attacks.

The Australian government is trying to give an impression that to solve the refugee crisis it needs to extend its campaign of anti-IS air strikes from Iraq into Syria. The Royal Australian Air Force (RAAF) operations against IS in Syria commenced on September 16. The announcement was made in conjunction with the decision to permanently resettle 12,000 refugees most in need, out of camps in Turkey, Jordan and Lebanon, with an emphasis on women, children and families of persecuted minorities.

…the US feels that a stepped-up Russian presence could lead to more civilian deaths, create more refugees, and lead to a “confrontation” with the anti-IS coalition in Syria.

The Australian authorities have stated that airstrikes will not target the Assad regime. Foreign Minister Julie Bishop said that although Australia’s position of opposition to the Assad regime remains unchanged, Australia would aim to suppress Islamist violence in Syria and Iraq. The government had no reservations in saying that any Australian who fought with IS in Syria could be subject to air strikes by Australian aircraft.

Four key European countries — Greece, Portugal, Spain, and Ireland — will be going to polls in the coming months as EU faces up to its ‘devils’ – of shared responsibility, rise of the rightwing elements in local politics and the pro-austerity economic policies of post Eurozone crisis. Some of these are increasingly getting entangled with its response to the refugee crisis.

The Russian move to Syria represents a frontal challenge to US and European efforts to isolate the Assad regime and end the four-and-a-half year old conflict. While Russia sees Assad as a key stakeholder in the fight against IS, the US feels that a stepped-up Russian presence could lead to more civilian deaths, create more refugees, and lead to a “confrontation” with the anti-IS coalition in Syria.

All said and done the ‘holistic’ approach to the refugee crisis still does not address the other conflict zones resulting in flow of refugees viz, Afghanistan, Eritrea, Libya, Iraq, Yemen etc. Neither does it take into account the effect of the increased military action on the 10-12 million-odd internally displaced people (including 270,000 Palestinian refugees) in Syria who are not part of the refugee exodus as yet. It seems to be just another session of the ‘great game’.