Home  >  Spotlights  > Military & Aerospace  >  Reduction of Manpower in the Indian Army: Need to Tread with Caution

Reduction of Manpower in the Indian Army: Need to Tread with Caution 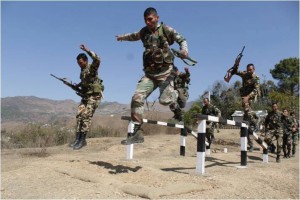 There has been talk of late on balancing the “Teeth to Tail Ratio” in the Indian Army. Proposals for discussions on the above have been in the offing for almost over two decades. This has also been backed by a number of studies, which of course are gathering dust. The larger question that needs to be asked is what could have been the potential reason for this most-needed reform, which holds a telling effect on our defence budget to have been shelved time and again for all these years? In my view, the answer lies in the lack of an integrated approach in putting forward answers to this most vital question. This integration required is to be addressed at three levels; operational, logistical and the Tri-Services, while not necessarily being in that order. It goes without saying that technological interface will remain the backbone of this venture in one form or the other.

Operational Readiness based on Threat Perception

The Indian Armed Forces are structured and organised to face external aggression and to aid the civil authorities in maintaining internal law and order problems that may arise from time to time. They also are meant to be the final/last responders in case of any natural calamities and national emergencies. It is a different matter of debate that we find that more often than not, the Armed Forces are not the last, but the first responders.

Serious thoughts on the reduction of manpower will ease the defence budget. For this, the first and foremost condition is that our border manning policy needs to be enforced strictly as per the ‘One Border-One Force’ policy that came out of the Kargil War Review Committee report. The Army cannot oversee the functioning of the Forces which come under the Ministry of Home Affairs. The Army has its own Long Term Integrated Perspective Plan (LTIPP) 2012-2027 based on threat perceptions of a two and half front war in a worst-case scenario. There is a need to increase focus on the primary role of facing ever-increasing threats of colluded external aggression. India has to accept the evolving and changed focus on its northern and eastern frontiers.

Today, the Army is hugely involved in low-intensity conflicts in J&K and the Northeastern states of Assam, Nagaland, Manipur and Mizoram. Is it not high time that these low-intensity conflicts be left to the Rashtriya Rifles/Assam Rifles and CAPFs? Why is the Indian Army being burdened with the overarching role of providing a holistic internal security cover, when many other forces are being raised for the same purpose/objective? It is discouraging to see the Army being called out even at the failure of state police issues to control very routine and mundane situations of maintaining law and order.

The Issue of Jointmanship

Perhaps the biggest problem lies in inter-service integration called ‘Jointmanship’ which has been the crying need of the hour for decades. This must follow a top-down approach wherein an operational philosophy and joint doctrine should lead to joint training and thereafter joint logistics to support the forces in battle. For this, no more studies are needed as more than adequate research and analysis has been put into the cupboard that is gathering dust. It is time to act now but not without preparing common grounds with a level-headed approach that must not overlook the developing, complex, and fragile security scenario.

When we talk of the teeth to tail ratios, it actually refers to a chain of logistics that the present Indian Army inherited from the British based on its experiences of the Second World War era. India has grown in geometrical progression since the time of its independence. Today, it has tremendous capabilities of keeping stocks and delivering them across the national frontiers as also endowed with repair and recovery capabilities that are waiting to be exploited and coordinated to its full potential. For exploitation of the above, the induction of the new generation of vehicles and modernization of inventory management systems needs better coordination. The recommendation should be that of testing them in the Army units and formations located in the peace stations and also at the inter-services level. There is a high probability that the integration of logistics in this manner at the national level will be a force multiplier in huge savings of manpower and reduction of the tail which is proving to be a substantial drain on India’s defence budget.

The focus and implementation should simultaneously be on the technological upgradation within the organisation. For instance, while computers have been inducted, there are huge deficiencies in the software support and end-to-end connectivity to fully exploit the capabilities. This actually has resulted in doubling the efforts and manpower for the same job in many cases as also keeping obsolete equipment as a backup in case of any break down in modernisation process. It holds true particularly in case of the technical arms and services.

Finally, the Army is a profession with non-reversible losses and very high stakes involving issues of national security, territorial integrity, unlike other professions where reverses can be corrected within acceptable limits. Therefore, there should not be a hasty approach to force through decisions, particularly on the sensitive issues such as manpower reduction. We cannot take the risk of lifting both our feet off the ground at the same time and end up on our faces. In fact, the philosophy of maintaining adequate reserves to take care of unexpected situations is prudently applicable here.

It is time to refocus on the Indian Army’s primary role – that of guarding the nation against external aggression, threats, and keep our teeth as sharp as ever. It is also time to reduce intense, proactive involvement in the internal security situations and leave it to the CAPFs, which today are as much in numbers as the Indian Army, even though not so much in quality and accountability. There is a requirement to increase software support and end connectivity to automation that has been undertaken. Integrating and ruggedizing the inter-services logistics at the national level to as far forward as possible and ensuring its sustainability in peace, and thereafter gradually strengthening it for war-like conditions is the need of the hour. The above, in all, constitute the preparing grounds on which reduction in manpower should be envisaged and undertaken.