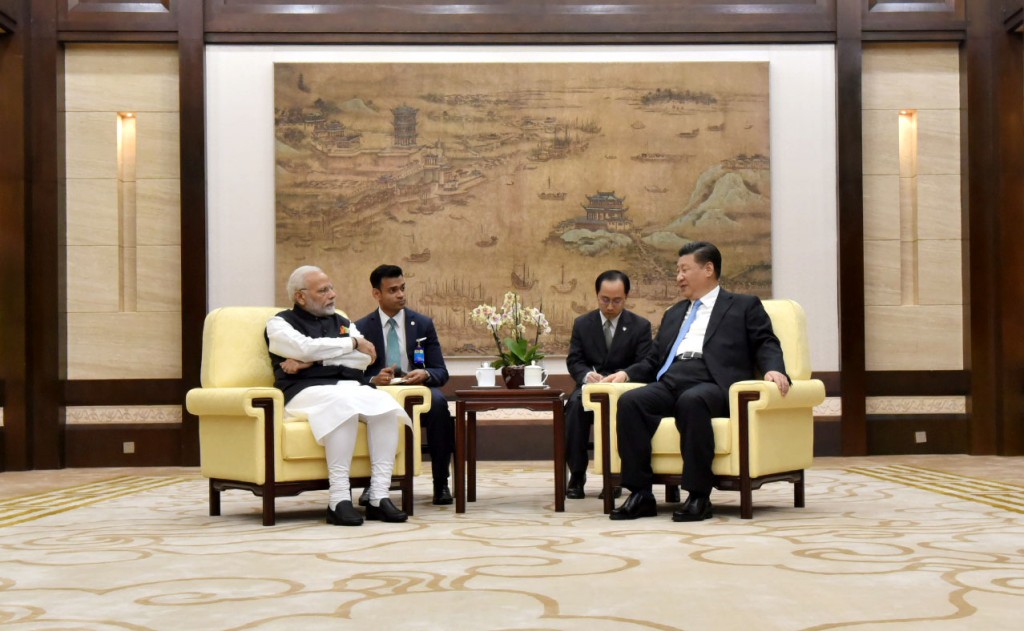 The Prime Minister Narendra Modi meeting the President of the Peoples Republic of China Xi Jinping, in Wuhan, China on April 27, 2018.

This was an informal summit. During the summit they met on six occasions, two were with aides while the other four with interpreters. The two leaders agreed to maintain strategic communication.[ii] They discussed a wide range of subjects which included strategic autonomy, concerted efforts to optimise the Asian century and reaffirmed the strong affinity between the two countries. They also exchanged in-depth views on governance. President Xi introduced Prime Minister Modi to China’s objectives of becoming a moderately prosperous society by 2020, achieving socialist modernisation by 2035 and then becoming a great modern socialist country by 2049. The two leaders agreed to carry out cooperation in building a joint project in Afghanistan and speed up the economic cooperation under the Bangladesh, China, India, Myanmar framework. They exchanged views on how to coordinate actions in WTO and reduce the trade deficit. The most important aspect is the issue pertaining to Security and actions on the disputed border.

The two leaders agreed that there was need to issue strategic guidelines to their Armed Forces. This was with a view to strengthen communications and to build trust and understanding. The Indian Foreign Secretary, Vijay Gokhale said the two leaders underscored the importance of maintaining peace and tranquillity in all areas of the border. He also said that the militaries were directed to earnestly implement various Confidence Building Measures agreed between the two countries. To amplify, this includes the aspect of mutual and equal security as also strengthen existing institutional arrangements in conjunction with information sharing mechanisms to prevent incidents in border regions.

They also endorsed the work of the Special Representatives to find a fair, reasonable and mutually acceptable settlement on the boundary issue. There have been 20 rounds of talks to resolve the boundary dispute and have so far worked out different mechanisms to keep peace along the Line of Actual Control.

Both leaders agreed on measures to tackle terrorism. However, the aspect of supporting India on the arrest of Jaish-e-Mohammed chief Masood Azhar was not discussed. Nor was the issue on China’s opposition to India joining the Nuclear Suppliers Group touched upon. All aspects were discussed at the macro level and specifics were not discussed.[iii]

The talks were informal and there was no attention paid to specific problems on both sides. The positive constructive strategic fallout was to build a joint project in Afghanistan which is bound to irk Afghanistan. China is currently drilling oil and mining copper in Afghanistan. Further a road has been built linking Afghanistan through the Wakhan corridor. Discussions are on to extend the CPEC to Afghanistan. In addition steps are being taken to build the China-Kyrgyzstan-Tajikistan-Afghanistan-Iran Railway. It is also helping Afghanistan to set up a Brigade base at Badakshan region. The base would possibly see a strong PLA presence, in the garb of construction, training and other purposes. The joint project with India would definitely help China to be projected as a benign power.[iv]

China is looking to India as a lynchpin in its economic battle with the US as also the Quadrilateral Initiative between US, Japan, India and Australia. India is close to the US but is still not in their Camp or an ally. Certainly informal talks lead to deductions which helps in taking political decisions.

The talks did not deal with the substantive issues that affect Sino Indian relationships pertaining to China’s support to India becoming a member of NSG, the arrest of Masood Azhar and finally the build up in Doklam. All these issues were considered as specifics and left to heal with the passage of time. There was a lot of positivity displayed along the Line of Actual Control. Friendly Border Personnel Meetings were held at Chusul in Ladakh and Wacha in Arunachal Pradesh. [v]While this bonhomie lasts, it would be inappropriate for India to expect any major shift on China’s stand on these issues. These are political talks and the Indian Army should remain prepared for an awkward eventuality.

[i] Luo Zhaohui, Chinese Ambassador to India, “My Interpretation of the Wuhan Summit”, The Tribune, www.tribuneindia.com. , 06 May 2018.