Raising Defence Budget to Three Per Cent of GDP 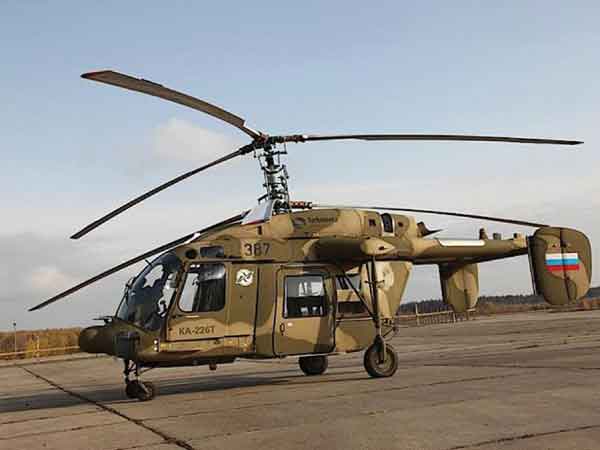 Speaking at the United Service Institution on May 4, 2017, the Chief of the Army Staff said that India needs to spend much more on military modernisation to ensure that economic growth continues unhindered. Lamenting the ‘general thinking’ that defence expenditure is a ‘burden’, he pointed out that the armed forces are not getting their ‘due share’ and that India needs to ‘draw a lesson from China’ in this regard.1

Barring a few discordant notes, defence analysts are unanimous in the view that India must spend a minimum of three per cent of its gross domestic product (GDP) on defence. Even the parliamentary Standing Committee on Defence (SCoD) advocates the same view, though it has never cared to explain its basis.

Be that as it may, it will be fair to assume that three per cent of the GDP will constitute the armed forces’ due share in the central government expenditure, at least for the present. This raises a conceptual issue: what exactly is the ‘defence budget’? Does this term refer exclusively to the outlay for the defence services or does it also include allocations for other departments of the Ministry of Defence (MoD)2 as well as the outlay on defence pensions?

The way the defence budget is defined would make a big difference to the extent of additional allocation required to be made to bring it up to the level of three per cent of GDP. This can be illustrated with reference to the budgetary allocation for the year 2017-18. India’s GDP for 2017-18 is estimated to be Rs. 168,47,455 crore.3 Three per cent of this works out to Rs. 5,05,423.65 crore, which is 1,45, 569.53 to 2,62,968.44 crore more than what has actually been allocated, depending upon whether one looks at the shortfall with reference to the allocation only for the three services or the total allocation for defence including defence pensions. (See Table1) 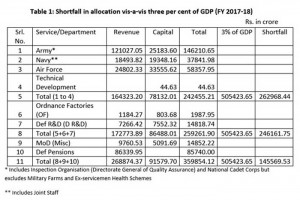 Broadly speaking, the Finance Minister had two options to raise the additional resources of Rs. 2,62,968.44 crore at the maximum or Rs. 1,45,569.53 crore at the minimum to provide the military its ‘due share’ in the union budget of 2017-18. He could have either curtailed non-defence expenditure to the extent required so as to allocate three per cent of the GDP for defence, or raised additional income to achieve the same result, assuming that no other sector had any case for a higher allocation. He could have, of course, exercised a combination of both these options. The question then is whether the Finance Minister could have, but did not, exercise these options because he saw military expenditure as a burden on the exchequer. Let us look at some facts.

The estimated total income of the government for 2017-18 is Rs. 21,46,735.00, out of which 5,46,532 crore is estimated to come from borrowings. This income is spent on a number of items, some of which are obligatory or quasi-obligatory. Finance Ministers have no choice but to provide in full for these expenses, which include interest payment, subsidies and transfer to states. A sum of Rs. 9,00,518.37 crore has been allocated for meeting this expenditure during 2017-18.

If three per cent of the GDP (Rs. 5,05,423.65) were to be added to it on account of allocation for the defence services, these four items of expenditure would have accounted for 65.49 per cent of the entire central government outlay. The percentage would go up to 67.79 per cent if the actual allocation made for the other departments of MoD for the year 2017-18 is further added to it.4 (See Table 2)

There is no telling whether the balance amount of Rs. 6,91,384.07 crore or Rs 7,40,793.00 crore – depending upon how the defence budget is defined – would have been adequate to meet all other expenditure for which provision had to be made, including health, education, infrastructure, internal security and several other social sectors schemes.

The problem could undoubtedly be tackled by raising additional revenue or by borrowing more money but that would have primarily entailed raising the direct and indirect taxes and/or settling for a higher level of deficit, disregarding the government’s commitment to containing the fiscal deficit as required by the Fiscal Responsibility and Budget Management Act, 2003.

So what were the real options before the Finance Minister? It does not really help to bemoan the inadequacy of the defence budget. It is important to establish the viability of increasing the defence budget to three per cent of the GDP.

Defence economists, think tanks and other protagonists of the idea that it is indeed possible to allocate three per cent of GDP for defence, with other things remaining the same, have to put their heads together and figure out different ways in which the Finance Minister could have skinned the cat differently while formulating the budget for 2017-18 to provide the military its due share. They also need to come up with a blue print of how the allocation for defence could be raised to match the demand next year, without losing sight of the government’s options and constraints in regard to raising its income in any substantial measure by enlarging the tax base or through other means. The bottom line is to demonstrate how the pie can be enlarged enough to ensure that at least defence gets its due share. It is also important to figure out what lessons the Government of India can learn from authoritarian China in regard to generation and allocation of resources, notwithstanding the advantage the latter already enjoys in terms of its economy, and without India having to emulate the Chinese political system.

1.“India’s growth must reflect in Army upgrade,” Times of India, May 5, 2017,http://timesofindia.indiatimes.com/india/indias-growth-must-reflect-in-army-upgrade-army-chief/articleshow/58523951.cms