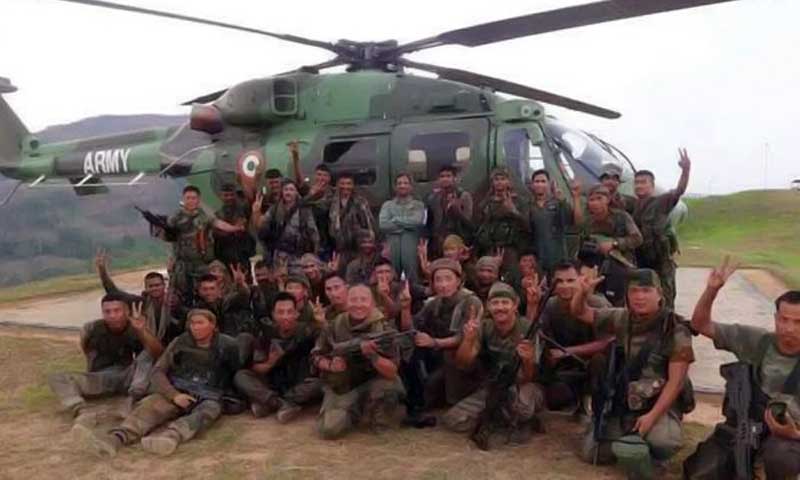 The successful raids by Indian army commando on two camps of motley collection of Northeast insurgent groups under the leadership of the Naga Socialist Council of Nagaland-Khaplang group (NSCN-K) across Manipur-Myanmar border was much more than a tactical response of hot pursuit after insurgents ambushed a column of 6Dogra Regiment soldiers killing 18 a few days back in Chandel district of Manipur.

This marks a welcome shift from the government’s reactive strategy of the past in the Northeast accepting the status quo to contain rather than culling out insurgents.

It heralds the Modi government’s strategy of assertive action against insurgent operations carried out from foreign bases. As the Minister of State for Defence RS Rathore explained it means wresting and retaining the initiative at all times rather than allowing the insurgents to gain upper hand and respond reactively.

This marks a welcome shift from the government’s reactive strategy of the past in the Northeast accepting the status quo to contain rather than culling out insurgents. Our piecemeal responses seemed to lack composite master plan of political and military actions. This had sent conflicting messages to the hapless population and reflected New Delhi’s benign neglect of the region much to the disgust of locals. For years they have borne the brunt of poor governance, lawlessness and corruption sapping the vitals of society all in the name of fighting insurgency, which seemed never ending. People have been disappointed for too long. Unless the Modi government follows up its military operations with the implementation of a composite strategy to improve the lot of the common man and tone up administration it will not make much headway in the troubled region. The moot point is can New Delhi do it?

The second aspect is specific to the Northeast. The Commando raid was not unexpected. It was perhaps the last straw for the Army which had been unhappy with the drift in India’s Northeast policy. And the successful execution of trans-border operation is a big morale booster for both the Army and the government. It provided the Modi government a political opportunity to demonstrate it is a government of action as a lot of questions have been raised about the large gap between its promises and performance in one year of rule.

Of course, extremists have claimed the news about the raids as mere propaganda as they had left the camp for the funeral of ‘ Major’ Rajanglong of NSCN-K and another cadre killed in 6 DOGRA ambush.

It all started with the Indian government refusing in March 2015 to extend its ceasefire agreement with the NSCN-K’s  as it continued to violate it with impunity. The peeved Naga outfit operating from bases in Myanmar started carrying out a number of small raids trans-border raids on security forces in which as many as 30 people had lost their lives.

The commando raids described officially as a “hot pursuit” were carried out on two insurgent camps across Chandel and had all the ingredients for success:  surprise, overwhelming firepower and speed. Drones and helicopter gunships were used effectively.  It was well supported by real time intelligence as per media reports. They quoted ‘sources’ (obviously from government) to estimate insurgent casualty varying from 28 to 118 killed out of about 150 in the camp. Commandos returned without any loss. Of course, extremists have claimed the news about the raids as mere propaganda as they had left the camp for the funeral of ‘ Major’ Rajanglong of NSCN-K and another cadre killed in 6 DOGRA ambush.

The Myanmar army pleaded ignorance about the raid though Indian ambassador had informed Myanmar President Thein Sein immediately after the raid. Though the President’s office acknowledged the raid, it said the raid was carried out in Indian soil. This was not unexpected. But these issues do not matter because government’s larger message of cautioning neighbours not to allow anti-Indian extremists in their midst has been conveyed to all, loud and clear.

For many years the whole of Northeast had been held to ransom by the sporadic activities of about a dozen Northeast insurgent groups that had periodically taken refuge in Bangladesh and Myanmar hinterlands to scuttle the region’s return to normal life.

This had kept the embers of separatism and extremism burning. After Sheikh Hasina came to power there was a change in Bangladesh’s attitude to these sanctuaries. It drove them out or handed them over to India. Paresh Barua an important leader of the United Liberation Front of Assam (ULFA) fled to Myanmar. Myanmar’s borders have remained porous as people of same tribal affinity living 20 km on both sides of the border are allowed to move freely for border trade.

For a long time these areas ceased to be the focus areas of Myanmar army as it was already stretched due to its preoccupation with the larger Kachin, Shan, Karen and Kokang insurgent groups. They have continued to be intractable.

So Northeast insurgents managed to establish safe havens in Myanmar from which they make  hit and run raids. This had thwarted down the government efforts to end extremism in Northeast. But the question is how will the government follow it up?

The raids probably broke up the efforts of the ULFA(Paresh Baruah), Kamtapur Liberation Organisation, National Democratic Front of Bodoland (Songbijit) and NSCN-K to unite all insurgent groups under the umbrella of the United National Liberation Front of Western Southeast Asia(UNLFWSEA). It would have attracted other smaller outfits like  Manipur’s Peoples Liberation Army (PLA) and Kanglaipak Communist Party (KCP).

The Indian raid across the border has substantiated action of the much proclaimed policy of not allowing acts of extremism on Indian soil to be carried out from foreign bases about which India had talked for years. So it has sent a strong message to Pakistan that Modi government means business. So naturally Pakistan’s top leadership from NSA to Army chief seem to have been rattled if we go by their statements.

Apparently the raids had their ripples in China too as Chinese arms traffickers are the main source for supplying modern weapons to various insurgent groups. The Chinese border continue to be a source of weapons for insurgents. It is likely to be read with Modi’s strong message about the need for sensitivity about Chinese troop intrusions given on earlier occasions.

Obviously, Pakistan and China will require highly nuanced strategies before India can contemplate such punitive actions as both the nations are qualitatively different from Myanmar with many more international ramifications. But Modi has managed to revamp India’s relations with its other neighbours including Myanmar and Bangladesh which are better than ever before. This would help India to deal from a position of strength with its estranged neighbour Pakistan which could discourage it from indulging in ISI’s dirty tricks in India in collusion with Jihadi terrorists. At least Pakistan will have to think twice about it in future.

So political parties would do well to understand the government’s statement of policy on assertive response to trans-border terrorism in the larger national context rather than describing it as “jingoistic” or “boasting” as done by the Congress party, which is at best petty.