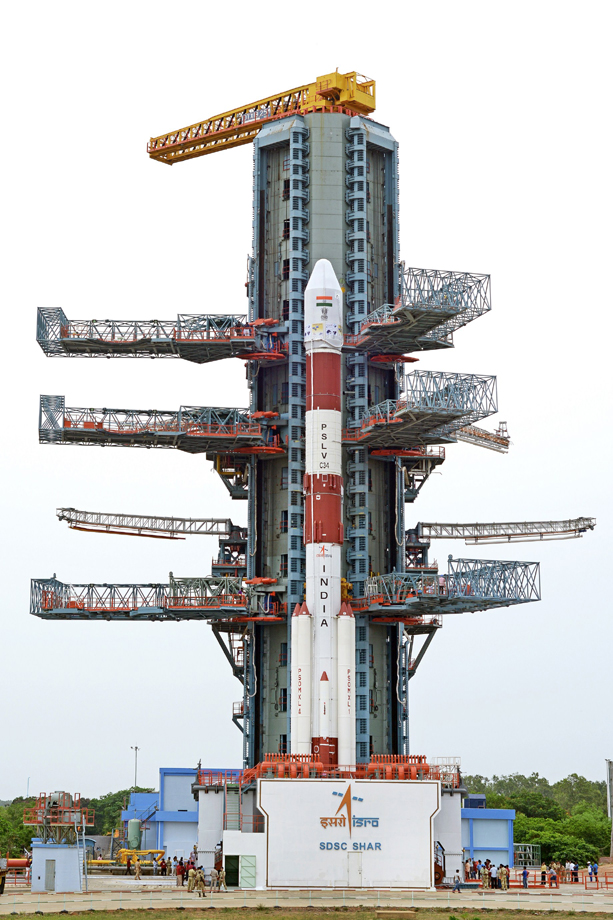 The Indian Space Research Organisation (ISRO) successfully launched 20 satellites on 22 June 2016. This PSLV C-34 mission carried the Cartosat 2 series satellite as its main payload and 19 other micro and nano satellites. Amongst these 19 satellites, 17 have been launched for foreign customers. The most significant feature of this PSLV mission was the launch of several satellites by using a single rocket.

Launching several satellites on one launcher saves both time and money. Particularly, if the satellites are required to work in tandem, then it is better that they are launched together. Launching of more than one satellite in a single mission is not a very unique activity. In the past, many such launches have taken place. However, the launch of eight or more satellites is particularly noteworthy. During 2008, ISRO had launched 10 satellites in one mission and now, with the PSLV C-34 mission, it has doubled that number.

During the initial phase of the satellite era (the 1960s), various launches with more than eight satellites have been undertaken mainly by the erstwhile USSR and the United States (US). The purpose behind attempting such launches was different. These launches were essentially made for military purposes. All the technical details of these launches are not available for obvious reasons. The available information indicates that the first attempt to launch more than ten satellites was made by the US on 16 August 1986 using an Atlas Burner 2 launcher, which actually launched 13 satellites. However, this was not a successful launch. These satellites were meant for undertaking radar calibrations and intelligence and surveillance gathering. A major launch was undertaken by the erstwhile USSR on 28 April 1976 with 24 satellites, which appears to be have succeeded. These satellites were exclusively meant for the purposes of radar calibrations. In all probability, such radars may have been ballistic missile early warning radars. These radar calibration satellites were essentially hollow metal spheres with a precisely defined radar cross-section (RCS) to calibrate ground based radars (used for radar calibration measurements).1

The TAIFUN-2 series of satellites were launched for these purposes for many years and these launches were carried out by using the Kosmos 11K65M (satellite launcher based on Yangel R-14 IRBM). Until the 1990s, more than 25 such missions were undertaken by the USSR and all these missions carried 25 satellites. There were two missions with 36 satellites each and for these missions the Tsyklon-3 launcher was used which is now the Ukrainian orbital carrier rocket (a derivative of the R-36 ICBM).2

Till the end of Cold War, around 95 to 100 cases could be found when a single rocket was used for launching eight satellites or more. All these launches were for military purposes undertaken by either the US or Soviet space agency. In comparison, in the period post 1990, only around 25 to 30 launches have taken place involving eight or more satellites, essentially for commercial/civilian purposes. Also, mostly in such launches the tendency is to limit the number of satellites to less than 15. Apart from Russia and the US, the other state that has shown considerable interest in such launches is Japan. In addition, one odd launch has been undertaken by the EU, China and India.

During the Cold War era, developments/experimentations in space technologies had a large nuclear weapons bias. The idea was to use these technologies (directly or indirectly) to enhance the lethality of the nuclear arsenal and showcase technological supremacy. Hence, the military focus of all efforts to launch multiple satellites. Also, major nuclear powers in that era were trying to test and demonstrate their MIRV (multiple independently targetable re-entry vehicle) capability – a single ballistic missile carrying several small warheads so as to aim at different targets spatially separated from each other. The launch of multiple satellites simultaneously allows a state to partially demonstrate the capability to possess MIRV technology. For MIRV, mastering re-entry technology for entering the earth’s atmosphere is important in addition to multiple launch technology.

For India, at this point in time, ISRO developing expertise with multiple launch technology is more important from the commercial perspective than for any other reasons. ISRO has a proven track record with its PSLV system. Now, in total, it has launched 74 satellites for other countries. Today, many countries are keen to launch their satellites through ISRO owing to its excellent track record. Also, ISRO offers a most cost-effective option for launching satellites. In the present era, there is much demand for launching smaller satellites and possessing multiple launch capability would allow ISRO to attract more international customers.

It is also important to note that multiple satellite launch capability continues to have strategic utility. For warfare in the 21st century, there is an increased focus towards using satellites both for strategic and tactical purposes. Technologies like satellite swarms provide a variety of benefits in modern day warfare mainly for communication and navigational purposes. Also, attempts are being made to develop and launch swarms of tiny, inexpensive, spy satellites to directly provide intelligence inputs for soldiers on the ground.

Launching several small satellites on one launcher obviously saves time and money. More importantly, such small satellites have a life time of only two to three years (in comparison with large satellites which normally have a 15 year-plus life). This allows developers to use the latest sensor technology while designing small satellites. Also, the interaction among the satellites becomes easier owing to every satellite being built based on similar and compatible technologies. Launching many satellites together by using a single rocket had a specific military utility in the Cold War era. This utility is getting reinvented in the present era.