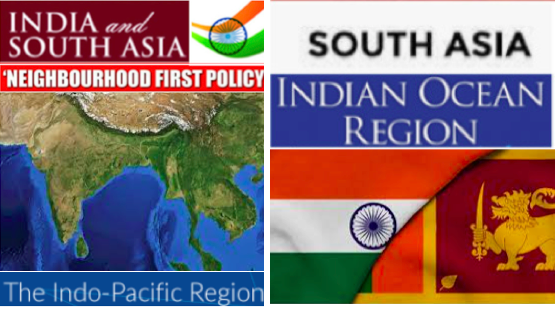 Importance of maritime domain for India and Sri Lanka.

Improving maritime security in the Indian Ocean rim is crucial for both India and Sri Lanka for securing the strategic interests of both countries and achieving sustainable growth and development on a national scale. A secure maritime environment not only ensures the security of the maritime territories of both countries but also protects Indo-Sri Lankan interests in their respective Exclusive Economic Zones. Moreover, a secure Indian Ocean rim also protects trading routes and lines of communications that go through the maritime territories of India and Sri Lanka.

India’s approach to cooperation with Sri Lanka has primarily revolved around its strategic and security interests in the Indian Ocean region bordering the Indian peninsula.

Given the increased presence of regional and international powers in the Indian Ocean region, Indian maritime diplomacy has mostly been focused on the development of regional maritime cooperation frameworks that emphasize maritime security. To this end, India has embarked on efforts to consolidate other littorals in the Indian peninsula with Sri Lanka emerging as a key partner. Its proximity to India, and its position as an island nation, provide Sri Lanka with strategic importance in maintaining political and economic interdependence. The Indo-Sri Lankan maritime cooperation framework has been achieved through various foreign policy initiatives and bilateral arrangements between the two countries. For example, the tripartite agreement signed between India, Sri Lanka, and the Maldives is a maritime security agreement that promotes cooperation on the exclusive economic zones of the three littorals and other joint maritime security initiatives.

Way Forward: Balancing the Act with SAARC and Other South Asian Littorals.

Over the past few years, India’s foreign policy initiatives have strengthened its focus on South Asian geopolitics. The littorals of the South Asian region, particularly Sri Lanka, have been one of the top priorities of India. The role of India in SAARC is also of significance as it defines the dynamics of political will and interaction among the SAARC member states. Imagining a collective maritime security framework under the umbrella of the South Asian Association for Regional Cooperation  (  SAARC )  is within the realms of imagination.

However, this can only be achieved if India takes an active front in demonstrating its political will to advance the maritime security interests of south Asian littorals. The increasing security concerns in this ocean, demand a greater emphasis to be laid on the maritime security agenda of the Indian Ocean region through regional and sub-regional platforms. Ultimately, this will see India emerge as a regional power that has expanded its maritime orbit of security in the Indian Ocean particularly with its southern neighbor Sri Lanka and other South Asian littorals.

received his PhD in the area of International Affairs. He was the recipient of the prestigious O.P. Jindal Doctoral Fellowship and SAU Scholarship under the SAARC umbrella. He is also an Adviser/ Global Editor of Diplomatic Society for South Africa in partnership with Diplomatic World Institute (Brussels). He has received accolades such as 2018/2019 ‘Best Journalist of the Year’ in South Africa, (GCA) Media Award for 2016 and the Indian Council of World Affairs (ICWA) accolade. He is the author of ‘Politics, Economics and Connectivity: In Search of South Asian Union.’