Professional Mooring: The Making of an Officer 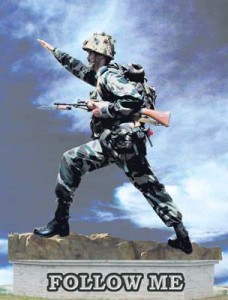 The Indian Army, the second largest in the world, is a voluntary organisation. A general conscription has never been deemed necessary. Only after the Sino-Indian conflict of 1962 did the Indian Government resort to the grant of Emergency Commission. Another occasion for Emergency Commissions was in the pre-independence period during the World War II. Even as the strength of the British Indian Army increased ten-fold from 1,75,000 to 20,00,000 personnel, recruitment was entirely on a voluntary basis.

India’s large population base takes care of its human resources requirements. There is often much distortion in dissemination information regarding the shortage of officers. A large number of candidates are unable to meet the prescribed physical, mental and medical standards leading to the dearth of successful candidates.

Cadets at the Officers Training Academy are enrolled after a rigorous selection process. Since they have chosen the profession of arms voluntarily, the level of enthusiasm and receptivity with regard to professional education and training is of a very high order. 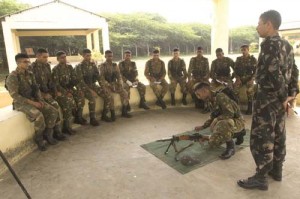 Familiarisation with his Weapon: A Soldier’s Best Friend

The character and mode of warfare changes with time and region. The Indian Army is currently fighting proxy wars, insurgency and terrorism, even while it maintains the utmost level of vigil, preparation and readiness for a conventional war that may be forced upon by its adversaries.

Tactical training at the Officers Training Academy, therefore, is designed to prepare cadets for the threats to the country in the present as well as the future. Possessing one of the most variegated terrains in the world, India has icy battlegrounds in Siachen as well as high altitude terrain in North and East. From the forested areas in the Northeast to the sandy deserts of Rajasthan and the swampy lands of Kutch in Gujarat, each type of terrain demands a unique method of operation in the battlefield. Soldiers must therefore be physically and mentally robust to meet the demands and operational challenges of difficult terrain. The Officers Training Academy therefore, lays great emphasis on the requisite mental and physical toughening during training. 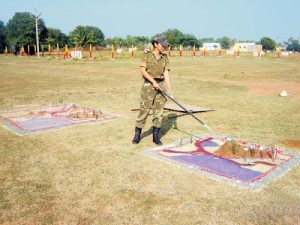 Learning the Art of War on a Sand Model

Developments in technology have brought about a ‘Revolution in Military Affairs’ (RMA). As military technology graduated from gunpowder to tanks, fighter aircraft, submarines and nuclear weapons, the latter was considered to have brought an end to direct military engagement. But that has not been the case as witnessed in the recent wars in Iraq which reinforced the belief that the man behind the weapon matters. It also vindicates that whatever be the changes in military technology, the principles of war – Selection and Maintenance of the Aim, Maintenance of Morale, Offensive Action, Security, Surprise, Concentration of Force, Economy of Effort, Flexibility, Cooperation, and Sustainability remain inalterable. Only their modes of application have continued to evolve.

“How can a man die better, than facing fearful odds, for the ashes of his fathers,
and the temples of his Gods”

As the duration of training at the Officers Training Academy, is six months less than that at the Indian Military Academy, the tactical training schedule is quite intense. The hot and humid weather of Chennai though rather oppressive, it does help cadets develop relatively higher levels of endurance and forbearance – critical attributes of a soldier.

The initiation of cadets into professional training is gradual. Initially the emphasis is on acquisition of knowledge and skills on map reading, navigation, weapon training, field craft, battle craft and rifle firing. To develop aggressive spirit during close combat, cadets are trained in bayonet fighting. In addition, cadets are made battle-worthy through Obstacle Training and are taught practical aspects of tactics in Camps and Exercises. Camp ‘Pravesh’ is organised for the first term cadets and as the name suggests, it heralds their entry into the soldierly world. In this camp, the emphasis is on the very basics such as siting of weapons, defence at section level and map reading.

Competitions like tent pitching and tent layout are also part of this camp. Towards the end of the first term, Camp ‘Nomad’ is organised wherein cadets learn the basics of tactics at the section level. The camp culminates with inter-company Josh Run of 25 Km for Gentlemen Cadets and 15 Km for Lady Cadets followed by a Camp Fire. In the final term, cadets undergo Exercise Chindits, wherein the emphasis is on Quick Attack at platoon level. 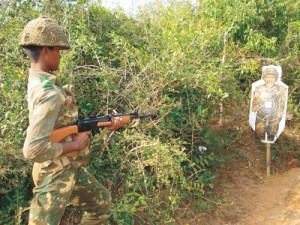 Familiarisation with his Weapon: A Soldier’s Best Friend

The other exercises held in the final term are Exercise Parvat Raksha or mountain warfare and a Capsule on Counter Insurgency Operations and Counter Terrorism Operations. The Counter Insurgency Capsule focuses on operations like Cordon and Search, Road Opening, Convoy Protection and Destruction of Militant Hideouts. Camp Shatrujeet, where the emphasis is on Defence and Attack at the platoon level, marks the culmination of tactical training phase. The Camp is divided into different phases – Exercise Raksha, Exercise Shatru Nash and Josh Run of 40 Km for Gentlemen Cadets and 25 Km for Lady Cadets. The cadets first take up defensive positions and after successfully repulsing an enemy attack, go on the offensive by launching an attack on a determined and tenacious enemy force.

Cadets are provided weapons training which includes firing heavy calibre weapons such as Rocket Launchers and Mortars as also Grenades during field firing exercise. As it is important for cadets to have a feel of the battlefield environment, they are put through a Battle Inoculation Exercise.

Exclusive excerpt from the book “The Making of an Officer”.

One thought on “Professional Mooring: The Making of an Officer”