26 October, 2021
Home  >  Spotlights  > Geopolitics  >  President Biden and the Making of a New US Policy on North Korea 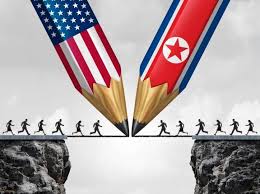 The change of leadership in the US means that a new strategy on North Korea will be articulated. This article looks at the developments in this regard: the ways in which the Biden presidency could differ from the previous administration’s approach, and what this could mean in the long-term.

On 3 March 2021, the President Biden administration released an Interim National Security Strategic Guidance which promised diplomacy as the “tool of first resort,” with a preference for working more closely with allies, South Korea and Japan, in dealing with North Korea. The document indicates that Washington is likely to give more autonomy to diplomats and officials, in a reversal of recent past trends. The most important part in the Interim Guidance document is that it begins with the more modest goal of reducing threats emerging from Pyongyang by restraining its arsenal, and working towards the ultimate goal of denuclearisation.

On 14 March, reports via White House sources indicated that Pyongyang had been unresponsive to Washington’s offer of backchannel diplomatic talks underway since February. This probably suggests that Kim does not want to prematurely play his card, with the US still reviewing and consulting on an articulation of its North Korea policy. Further, US Secretary of State Antony Blinken and Secretary of Defense Lloyd Austin’s visits to Japan and South Korea in mid-March could mean two things. One, that the US would like a more coordinated approach on North Korean denuclearisation with its regional allies. Two, Washington is opting for a bottom-up approach.

These distinguish the evolving Washington approach on Pyongyang from earlier policy in important ways.

North Korea’s nuclear and missile issues were unresolved under the Trump administration despite all the buzz during that period. President Trump began his North Korea policy with ‘maximum pressure’ and ‘fire and fury’. He later changed course to hold three meetings with North Korean leader Kim Jong-un, becoming the first US president to do so. The last two meetings in 2019, in Hanoi and Panmunjom, were not as productive as his first in Singapore in 2018.

Trump’s activism in dealing with North Korea failed because it was not based on any coherent policy. This was evident from the fact that though he was trying to engage North Korea through personalised diplomacy, his team consisted of hawkish officials such as then National Security Adviser John Bolton. This sent mixed signals to the North Korean administration. Consequently, even a minimal level of trust for any forward movement remained elusive. There were two other problems in Trump’s engagement with North Korea. First, it was a top-down approach. Agreements anticipated from the summit meetings were to be taken forward by US and North Korean officials. Second, the Trump administration had a “front-heavy” proposal for North Korea’s comprehensive, verifiable, irreversible denuclearisation (CVID), but the trust quotient between the two countries, among other things, was very low.

Fast forward to 2021. In another move, the Biden administration wants to bring in Quad countries into the process. North Korean denuclearisation is one of the five points in the joint statement released on 12 March following the first Quad Summit. Approaching the North Korean nuclear issue via Quad means that China’s cooperation may not be sought, or it could be considered marginal. It also suggests that that the US has changed its policy stand: from the denuclearisation of the Korean peninsula—which was agreed to in the 2018 Singapore Summit—to denuclearisation only of North Korea. These changes could herald a widening gap between the US and South Korean approaches, with the President Moon Jae-in administration seeing China as critical to the process. Seoul is also prepared to denuclearise the peninsula if this covers North Korea in its ambit.

While it is too early to make definite conclusions about the Biden administration’s North Korea policy, a few important issues must be flagged: