Following the revelations by the Washington Post in 2001, Global Witness (an international NGO established in 1993 that works to break the links between natural resource exploitation, conflict, poverty, corruption, and human rights abuses worldwide) conducted a yearlong investigation into Al Qaeda’s involvement in the diamond trade. In March 2003 Global Witness released an investigative report detailing how Al Qaeda cells had strategically used diamonds for profit and to launder targeted funds. Evidence contained in Global Witness’ report came from the US government and FBI itself.

Almost 6 months before 26/11 2008 Mumbai Attacks the FIU-IND was already tracking the diamond industry for suspicious activities by terrorists.

In February of 2014 a report titled Money laundering and Terrorist financing through trade in Diamonds was published by a Paris-based Financial Action Task Force (FATF). The report revealed that India is one among five countries where the trade accounts of the diamond business are used to launder illegal funds amounting to millions of dollars that are eventually utilized in the financing of terrorists.

The report found that globally, diamond was linked to offences conducted by organized crime, such as drug trafficking, illegal weapons trade and tax offences, and even terrorist financing. And India was on the top of the list.

Almost 6 months before 26/11 2008 Mumbai Attacks the FIU-IND was already tracking the diamond industry for suspicious activities by terrorists. From an article published in DNA Money dated 7th June 2008 titled – Surat diamond business has a terror ring to it:

The FIU traced all foreign transactions of Surat’s diamond industry, especially those emanating from Belgium. It found that a great deal of money was being invested by terrorist groups.

Isn’t it true that some of the top diamond merchants are on the list of people who have kept their ill-gotten money in Germany-based Liechtenstein bank? Many persons on the list are Gujarati diamond merchants with offices all over world having roots in Palanpur. Isn’t it also true that in May 2014 eight of these diamond dealers were given a clean chit by the Income Tax department in the black money case? 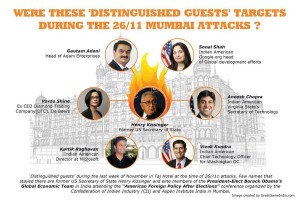 Isn’t it also true that during the Nov. 26 terrorist attacks in Mumbai members of the diamond industry were staying at the Taj Mahal and Oberoi hotels for year-end meetings with the Diamond Trading Company, some of whom had a very close shave and managed to escaped including the than DTC managing director Varda Shine, who was in Mumbai to host the DTC conference?

Is it also not true that these members were part the ‘distinguished guests’ hosted at Taj and Oberoi during the last week of November 2008? Most of them were coordinators of intelligence in South Asia. Few names that resided there being, former US Secretary of State Henry Kissinger and elite members of President Elect Barack Obama’s Global Economic Team in India attending the “American Foreign Policy After Elections Conference” organized by the Confederation of Indian Industry (CII) and Aspen Institute India in Mumbai.

The members of Obama’s elite economic team attending this conference with Kissinger were Indian-Americans, Sonal Shah (Head Global Development Efforts at Google.org), Aneesh Chopra (Virginia State’s Secretary of Technology), Vivek Kundra (Chief Technology Officer for Washington DC) and Kartik Raghavan (Director at Microsoft). Also reports indicate that Obama’s pick for the US Secretary of Treasury, Timothy Geithner, was absent from these meetings despite his long standing ties to India where he was raised; he is said to have been represented by as yet ‘unknown’ aides from the US Federal Reserve Bank.

The purpose of this conference in India at Taj was to advocate for the planned Iran-Pakistan-India gas pipeline project. Though strongly opposed by the Bush Administration and Pakistan’s ISI Intelligence Service in the past, the Obama administration had planned on making it a ‘centerpiece’ towards his goal of achieving peace in Southeast Asia, and to which Kissinger had stated: “The pipeline will be a natural thing to do and I expect the new administration [to be headed by Obama] to begin discussions with Iran.”

Were these distinguished guests rethinking how to save falling western economies with the aid of India? As often, history makes it a habit to repeat itself; in the last 200 years whenever the West was in trouble, the East India Companies (EIC) or subsequent managing partners of EICs plundered India’s human and natural resources for their survival. In this ‘Great Game’ they kept other geo-political players at bay. Since more than the last decade, under UPA and NDA administrations, Indian foreign policy and domestic economic policy is veering dangerously closer to US-British-Israeli economic interests, viewed by other geo-political players as an encroachment. Did other geo-political players viewed this meeting as a penetration of their turf?

Lastly, is it not true that even the latest Pathankot attack were carried out within less than 20 days after the groundbreaking ceremony of what was being called a pipe dream for decades, the Turkmenistan-Afghanistan-Pakistan-India pipeline that took place in the Turkmen town of Mary and was attended by leaders of the TAPI countries? And just a week after the surprising and much talked about meeting now known as the Billion Dollar Tea Party of the Indian Prime Minister with his Pakistani counterpart on the occasion of the latter’s 66th birthday during a two-hour stopover on his way back from his visit to Russia? 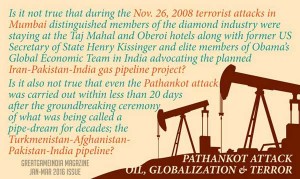 What forces are working behind this? Who doesn’t want to see relations between India and Pakistan improve? Why have we not able to identify these forces since decades? Doesn’t it indicate that our security and intelligence forces are not equipped to face the challenge of this new kind of terror and needs a new and more adaptive orientation in the globalized world of liberalization and privatization?

Doesn’t it indicate that our security and intelligence forces are not equipped to face the challenge of this new kind of terror and needs a new and more adaptive orientation in the globalized world of liberalization and privatization?

Certainly good strategic partnership between the two neighbours would mean a strong and stable subcontinent. More importantly, who gains from a weaker and always infighting Asian sub-continent?

“The Art of War” written by TsunZu, which is considered to be the bible of strategy by many says “Expect what your enemy wants you to do and do exactly the opposite to win the war”. The quote sounds deceptively simple but has far reaching implications on the survival of empires and governments. As is the case with many of the terrorist groups, they are controlled not only by the states that sponsor terrorism but by the nations that sponsor the states that sponsor such terrorism too. So though all evidence eventually leads to the North Western frontier of India, to learn who instigates these groups, their actions, their modus operandi and their previous track record would guide us in doing what we as a third world neutral sovereign country should do. We hope to make a beginning in this new direction.