Pathankot Attack: India is missing the woods for the trees 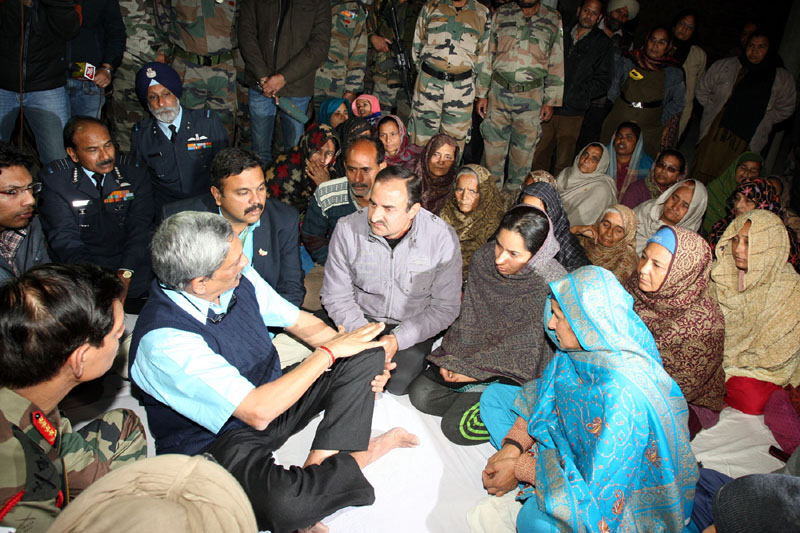 The Union Minister for Defence Manohar Parrikar along with the Chief of the Air Staff, Air Chief Marshal Arup Raha and the Chief of Army Staff, General Dalbir Singh offering condolences to the family of Late Subedar (Hony Capt.) Fateh Singh, DSC, at Chanda Gujran village of Gurdaspur on January 06, 2016.

It has been a gloomy beginning of the New Year for India and its security forces. Seven soldiers and a civilian have been killed in terrorist initiated violence in Pathankot, Punjab, while four brave soldiers of the Indian army have died in a snow avalanche in Siachen. Sacrifice in the call of duty is not new to the Indian soldiers, but such incidents during a festive season do leave behind a feeling of melancholy and dejection.

The terror attack on the Air Force station in Pathankot has gripped the nation in this first week of 2016. It is, however, not unexpected. After Prime Minister Narendra Modi’s call on his counterpart Prime Minister Nawaz Sharif in Lahore, Pakistan on 25 December, many experts, including this columnist, spoke of the possibility of a violent reaction by Pakistan based terrorist organisations functioning under the patronage of the Pakistan army. It has not taken too long for the prediction to come true.

Post the attack, the debate in India has centred on the lack of proper reaction to available intelligence input’s that led to a heavy loss of life in the incident. While this is an important and sensitive issue that needs serious thought, what is more important is to take note of the repercussions on Indo-Pakistan relations.

It is, therefore, vital to see the message that is emanating from Pakistan in the aftermath of this incident through its media.

The main English newspapers of Pakistan like Dawn and Express Tribune have been quick to emphasise that Pakistan has, “quickly and unequivocally condemned the terror attack and offered its cooperation to India.” The Pakistan media is also throwing broad hints about India being too quick in blaming Pakistan even before the identity of the terrorists is established conclusively. “The hostile reaction by much of the Indian media to the alleged involvement of Pakistanis in the attack even before the barest facts could be established underlines just how difficult peacemaking will be,” says Dawn. These are old tactics that have been used by Pakistan on many earlier occasions to fend off pressure.

What is new, however, is the subtle manner in which the Pakistan media is trying to manage international perception. Broad hints are being thrown about Indian media advising Prime Minister, through its editorials to “stay the course” and not stall or suspend talks with Pakistan after the attacks.

Further, the Pakistan media is calling for strict action in case the attack can be conclusively linked to a Pakistan based group. This is a smoke screen since it is well known that Pakistan has not acknowledged involvement of its citizens in the 26/11 Mumbai terrorist attack till date so there is little chance of acknowledging the involvement in this instant.

In fact, Pakistan has gone a step further this time by attempting to give this attack a local sheen. It has prevailed upon the United Jihad Council (UJC) to take responsibility for the attack. The UJC is an umbrella organisation for Kashmir centric terror groups, the main constituent being the Hizbul Mujahedeen (HM) which recruits only local Kashmir youth in its fold. Syed Sallahuddin, the chairman of the UJC is the leader of the HM.

In its statement the UJC has said that the attack was a message to India that Kashmiri fighters could strike at any sensitive installation across the country. “Pakistan has nothing to do with the attack but ironically the Indian government, media and their armed forces are suffering from Pakistan phobia,” said the UJC spokesman.

This is a brilliant move to take the heat off the Jaish-e-Mohammad (JeM) and its leader Maulana Masood Azhar who is a favourite of the Pakistan Army and especially the Pakistan Army Chief, General Raheel Sharif. The terrorist were definitely not Kashmiri’s and as such, the claim is false.

Two aspects are quite evident from the manner in which events have unfolded post the Pathankot incident.

First, the Pakistan army controls not only the government but also the Pakistan media, and of course, its loyalists in the India/Kashmir centric terrorists groups operating from Pakistani soil. It has brilliantly used its assets in the politico-strategic management of the incident.

Second, India is today in a position of disadvantage having lost valuable time in dwelling on the tactics and modalities of the Pathankot attack rather than the politico-strategic aspects. Once again the unimaginative Indian bureaucracy has missed the woods for the trees and put the nation on the back foot.

While contemplating the way ahead it would be practical for the Prime Minister’s of the two countries to decide whether they should keep meeting and thus give reason to terrorist and mercenary elements to perpetrate violence or pursue a better option of keeping their friendship under wraps and leverage the same to give a behind the scene push to normalisation of relations between the two countries.

The second moot point is –what more needs to be done to make Prime Minister Sharif stand up to his own Army Chief, General Raheel Sharif? He has received encouragement from the United States including blunt missives to General Raheel Sharif to lay off India; he has also received unmitigated support from Prime Minster Narendra Modi. Yet, he has not been able to generate the guts to take on his Army chief.

It should be made clear to Sharif once and for all that he can no longer run with the hares and hunt with the hounds. In case he continues to pursue his play safe dual policy there is little hope of improvement in India Pakistan relations.

With the euphoria generated by the visit of Prime Minister Modi to Lahore having waned considerably, what is absolutely certain is that the time for letdown of guard in Jammu and Kashmir has definitely not arrived. It is, therefore, business as usual for the security forces deployed there. They can look forward to a hard winter with extensive patrolling under extreme weather conditions and constant vigil along the line of control.

One thought on “Pathankot Attack: India is missing the woods for the trees”