Pakistan’s Militant Genie may not go back into the Lamp 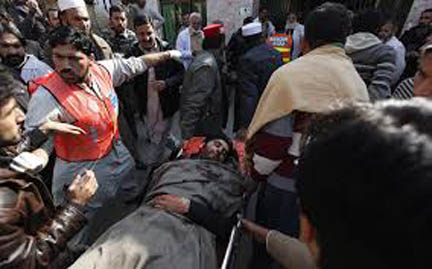 As Pakistan and the world come to terms with the Bachha Khan University (BKU) carnage, there is a realisation, now more than ever, of the persisting gaps and vulnerabilities in Pakistan’s security infrastructure, which terrorists have time and again exploited quite easily. The brutal attack also highlights the threats to the internal security of the country that have become complex and extensive over the years.

Militants have certainly been put on the back foot by the ongoing military operations in North Waziristan and Khyber agencies of the Federally Administered Tribal Areas (FATA), but their operational capabilities are still intact.

The main reasons behind this situation are firstly, the relocation of militant infrastructure to the Afghanistan side of Af-Pak and secondly, the presence of their support networks inside Pakistan.

Peshawar remains in the cross hairs of militants because of a combination of geography and history. The geographical location of Peshawar is in close proximity to the tribal areas where Operation Zarb-e-Azb , the offensive by of the Pakistan Army against militants of the Tehreek-e-Taliban Pakistan (TTP) is underway. Add to this the fact that it is the capital of Khyber Pakhtunkhwa and it easily becomes a suitable target for the militants to strike.

The January 20 attack was claimed by Umar Mansoor, of the TTP Geedar group, the mastermind of the Army Public School (APS) Peshawar attack in December 2014. A spokesperson from the TTP, Mohammad Khorasani, on the other hand, has condemned the attack, terming it “against Shariah. It is quite evident that a number of factions and splinter groups have emerged and a turf war to gain supremacy is underway.

The BKU attack has been launched when TTP and other local and international groups are passing through certain transformations and internal crises. The Islamic State’s (IS) inspiration has widened their ideological and operational spectrum. Dissatisfied commanders are challenging their leadership and forming their own groups. Infighting among militants has also initiated a competition between the different groups and factions not only to prove leadership skills but also operational capabilities.

These attacks certainly put pressure on the TTP in terms of how to remain relevant in the changing militant landscape of Pakistan. At present, the TTP continues to haves its bases in Kunar, Nuristan and Khost provinces of Afghanistan and still has strong nexus with Central Asian militants and Al Qaeda.

In many ways, the soft target attack on BKU is reminiscent of the gruesome militant attack on the APS, Peshawar which left over 140 dead – most of them children. 13 months ago, militants targeted a school being run by the Pakistan Army, now they have attacked a university named after a nation icon.

The message is the same and it is loud and clear – standing up to them has a price, and more often than not, it has to be paid with blood. The militants were in military uniforms and carried heavy weaponry, suicide vests and sufficient food thus indicating that they had planned a prolonged operation.
After the Mina Bazaar attack in Peshawar in 2009, a debate over the selection of civilian targets had sprung up among the terrorists, but the attack on APS, Peshawar and BKU shows that militants can cross all limits when they have reached a certain stage of frustration.

Though managing large-scale attacks is not an easy task for the militants, growing competition among these groups may increase the level of threat. A replication of or increase in such attacks in the near future, thus, cannot be ruled out.

Despite the ongoing operation against the hardcore militants in the tribal areas of Pakistan, the TTP’s ability to strike in the settled areas of the country should be a matter of concern for Pakistan’s civil and military leadership. The rot is surely deep. Pakistan is passing through extraordinary circumstances which demand extraordinary measures.

While it is obvious that it will take a significant amount of time to eliminate militancy from Pakistan, the more worrying part is that the nation has shown no clear intent or political will to counter the mindset that has been a major hurdle in developing a counter-terrorism narrative in the country.

After the horrific militant attack on APS, Peshawar that jolted Pakistan’s civil and military leadership, Prime Minister Nawaz Sharif announced a comprehensive roadmap to counter terrorism in his 20-point agenda known as the National Action Plan.

While the plan looked good on paper, the situation on the ground remains disturbingly awful and unchanged. The plan talked about countering hate speeches and extremist material, choking funding for militants and militant organisations and dismantling communication networks of militant organisations. Point 3 of the plan stressed the commitment to ensuring that no armed militias are allowed to function in Pakistan, while points 10 and 11 talked about the registration and regulation of religious seminaries and a ban on the glorification of terrorism and terrorist organizations through print and electronic media.

Ground realities suggest that little has changed since then – so much so that the incumbent government itself has accepted that the progress on National Action Plan has been unsatisfactory.

Problems and gaps in state responses are well-known, and issues of lack of coordination among security and intelligence institutions are no secret. Coordination and trust is still absent among various intelligence and law enforcement departments.

Militants gain strength from the fragmentation and confusion over the operational strategy among the army, political and civil society leadership in Pakistan and their ability to sell their cause.

Through their propaganda strategies, militant organisations in Pakistan have tried to counterbalance the disparity between their capabilities and those of the Pakistan army.

A final word, while strategising its response to terror, Pakistan definitely needs to focus on the security threats posed by militants who continue to enjoy state patronage. The country simply has to show the intent to take on terrorists without making any discrimination.