Pakistan should be wary of Chinese designs in Gilgit & Baltistan 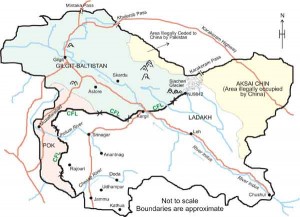 The Belt and Road Initiative (BRI) is Chinese President Xi Jinping’s dream project. The China Pakistan Economic Corridor (CPEC), which will pass through Pakistan Occupied Gilgit-Baltistan (PoGB), is a significant segment of BRI. Pakistan, currently passing through a difficult economic phase, acknowledges PoGB as a ‘disputed area’ while China, which has assured investment of over $ 46 billion in CPEC, is reluctant to invest in a ‘disputed area’.

Pakistan’s economic condition has deteriorated to a point where it must seek a bailout from Saudi Arabia and China, instead of the International Monetary Fund, to overcome its precarious economic situation. In 2018, the United States suspended aid twice; Pakistan is not getting foreign direct investment (FDI) because it is considered a terrorist state, remittances from Pakistani workers abroad have come down and exports are also not increasing compared to rising imports.

Pakistan, under pressure from China, passed the “Gilgit-Baltistan Order 2018” (GB Order) in May. The order seized the PoGB government’s powers and transferred them to the Prime Minister. It is an important step to alter the status of PoGB and declare it as Pakistan’s fifth province. The special powers were taken and the PoGB Chief Court was re-designated as the High Court. India’s Ministry of External Affairs lodged a strong protest and local people also demonstrated in and outside PoGB against this order.

Residents of PoGB are resisting CPEC as they feel it is a ploy of the Punjabi -dominated Sunni government to subjugate the region. Punjabis and Pathans would be settled in PoGB under the guise of constructing multifarious projects. Local people will not get employment and are likely to be rejected on grounds that they are not technically qualified. PoGB is the only area in Sunni-dominated Pakistan that has a Shia majority; hence Islamabad wants to change the demography of the region, by settling more Sunni Muslims there.

PoGB is crucial because of its strategic location and water and energy reserves. Islamabad had given little importance to PoGB, although it is five times bigger than Pakistan Occupied Kashmir (POK) and important rivers emanate from there. Only 1.8 million people live in PoGB, which is spread over 72,971 sq. kms, hence it has vast, unutilized land and resources.

China agreed to construct two dams, at Bunji and Diamer-Bhasha, on the Indus to generate electricity. Both Pakistan and China plan to exploit the untapped water resources and agricultural potential of PoGB. The population of Pakistan is exploding and it requires more arable land, while China also needs more agricultural land to feed its population. China emerged as the biggest importer of food items in 2017.

China also wants to strengthen its military presence in PoGB, which borders both Afghanistan and the disturbed Xinjiang autonomous region. The Uighur Muslims have revolted against repressive Chinese government policies against Muslims. Some Pakistani and Afghan terrorist outfits are assisting Uighur secessionists in the name of Islam. Afghan terrorists also use PoGB. Although Pakistan wants to control these Islamic terrorist outfits, so far they have not taken any stringent action against them. Uighur secessionist groups are also against CPEC, as they claim China wants to settle increasing numbers of Han Chinese in the region, with the malafide intention of changing the region’s demography.

Islamabad is not averse to the idea of the Chinese getting some control in the area as PoGB is a Shia majority area which seeks to secede from Pakistan. Meanwhile Abdul Hamid Khan, Chairman of the Balawaristan National Front (BNF), said in an interview that residents of PoGB want to secede from Pakistan and merge with India.

China wants to control PoGB so that it can eliminate terrorist outfits assisting Uighur secessionists. First, China will deploy its forces in PoGB to control terrorist organisations and, once it gets a foothold there, will never vacate the area. China, which considers India as its potential enemy and is making efforts to encircle India, would want to control the strategically located PoGB.

Pakistan should be careful about China’s unholy designs. Beijing, which has deep pockets, is constructing mega infrastructure projects in economically weaker countries. Chinese companies take contracts for these projects at inflated prices, while China also provides loans to these countries. When they are unable to repay their loans, China takes over the territory of these strategic projects. Sri Lanka lost Hambantota port; China occupied Myanmar’s Coco Islands and Pakistan has already lost Gwadar port. Beijing will also occupy the arable land and exploit the mineral and water resources of PoGB.

Islamabad should therefore stop assisting terrorist outfits and curtail its defence expenditure and divert that money for the welfare of its people and try to overcome its economic problems. Undue dependence on China will prove disastrous for Pakistan.