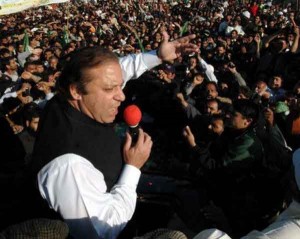 The successful holding of elections in Pakistan earlier this year marked a significant forward movement in the country’s politics with the Pakistan Peoples Party (PPP) handing over power to the Pakistan Muslim League (Nawaz), based on the people’s verdict. Nawaz Sharif’s victory and assumption of office as Prime Minister on 5 June 2013 was widely heralded by many in India as representing a changed dynamic, which would facilitate rapprochement in the strained India–Pakistan relations. However, the more circumspect in India’s strategic circles questioned the euphoria, because the fundamentals within Pakistani polity had not changed. These related to the de facto control exercised by the Pakistani military over certain aspects of foreign and domestic policy, internal conflict arising out of ethnic, sectarian and ideological fault lines and an almost bankrupt economy.

The Nawaz Sharif government has no strategy in place to curb terrorism despite tall claims made in its election manifesto.

The economic indicators within Pakistan remain grim and many believe that the state is on life support, dependant on financial assistance from the US and western donors. Karachi, the economic hub of Pakistan is a tinderbox, all set to explode. The PML(N) manifesto had specifically promised to limit government borrowing, but its record for the first three months in office holds little hope for such an outcome. The future looks grim with the State Bank of Pakistan planning to raise a colossal Rs1.6 trillion during the 1st quarter of FY 2014 through T-bills and an additional Rs175 billion through Pakistan Investment Bonds. The government’s efforts to turn around ‘loss making state enterprises’ have also been a non–starter, though three months is perhaps too short a period to make a valid assessment. Moreover, individuals heading these enterprises are political appointees, their selection having no relevance to considerations of merit and professionalism. It would be difficult if not well nigh impossible for them to come out of the red. While the energy sector has shown improvement in the three months since Sharif assumed power, multiple challenges in the sector remain. From an installed capacity of 23,538mw, production has increased to 13, 600mw, a quantum leap from the earlier abysmally low figure of 8000mw. However, this is still far short of the consumption requirements, which stand at about 16,800mw.

The security situation remains forbidding. Over 1,100 people have been killed in the last three months in terrorist violence, averaging about 14 fatalities per day. The country remains hostage to bomb blasts, which occur on a daily basis, and to suicide attacks occurring at a frequency of three to four per week. The Nawaz Sharif government has no strategy in place to curb terrorism despite tall claims made in its election manifesto. The Pakistan Army has neither the will nor the capacity to defeat the Tehrik-e-Taliban Pakistan (TTP) which means that the country’s security situation will remain grim for some time to come. Perhaps this realisation prompted the Sharif government to extend the olive branch to the TTP. In his maiden televised address to the nation on 19 August, the premier stated that his government would prefer talks to end the nagging insurgency.

Later, Pakistan’s Defence Cabinet Committee put the laying down of arms by the extremists as a pre-condition for talks, but speaking in a different voice, the interior minister, Chaudhry Nisar Ali Khan, said in a television interview that the government had set no preconditions for talks with militants. Asmatullah Muawiya, the chief of Punjabi Taliban welcomed the offer for talks but was sacked by the Taliban Shura, which met under their leader, Hakimullah Mehsud. However, Muawiya rejected the TTP decision, saying that the group has no authority to sack him as ‘the Punjabi Taliban has its own Shura which makes its own decisions’. Muawiya’s offer is seen as a split in the Taliban ranks but this must be viewed in context. The Punjabi Taliban, unlike the Taliban in FATA is close to the PML (N), to whom it gave active support in the recent elections. It is now payback time. Perhaps there is an unannounced deal with the Punjabi Taliban as stated in a news report published by ‘The News’ on 26 August 2013, which quotes confirmation of the deal through Malik Ishaq of Ahle Sunnat Wal Jamaat (ASWJ), who actually commands the Lashkar-e-Jhangvi. Many however, see such a deal as appeasement, which points to a lack of ability by the security forces of Pakistan to rein in the militants and bring them to the negotiating table.

The proposed drawdown of ISAF forces from Afghanistan will further exacerbate existing tensions.

The military still calls the shot in the country restricting the manoeuvre space available with the civilian government. While Prime Minister Nawaz Sharif continues to emphasise his mandate for peace with India, the actions of Pakistan’s military on the line of control belie that claim. Pakistan can ill afford to activate the LoC as it is fully committed in combating internal conflict, which is why the actions of its military is surprising. Perhaps it is to convey a message to the Sharif government not to get too close to India. The Pakistani establishment is also unlikely to wind down the terrorist training camps as it continues to view groups such as the Lashkar-e-Taiba as strategic assets for use against India. Sharif too is supportive of such groups as indicated by the financial support given by the Punjab government to Hafiz Saeed. There are hence inherent contradictions in Sharif’s approach to peace. While he may be desirous of reducing tension with India, he will continue to support the flow of terrorists into India from their safe sanctuaries in Pakistan.

The proposed drawdown of ISAF forces from Afghanistan will further exacerbate existing tensions. Instability in Afghanistan will have consequences on Pakistan, especially in its restive western provinces of Baluchistan and Khyber Pakhtunkhwa. Islamabad is also wary of India’s involvement in Afghanistan, despite India’s efforts being directed towards development activities and having no military component. All this belies hopes of an India-Pakistan rapprochement, taking place in the short to medium term. It has been argued that trade could be an important first step in building trust, but here too, the progress will be slow, largely due to Pakistani fears that India will swamp Pakistani markets as also the fear expressed by Pakistani farmers in Punjab that subsidised Indian agriculture will hurt their interests. While cooperation between the two countries can flow from converging economic interests, the road ahead remains long and will have to be chartered with care.