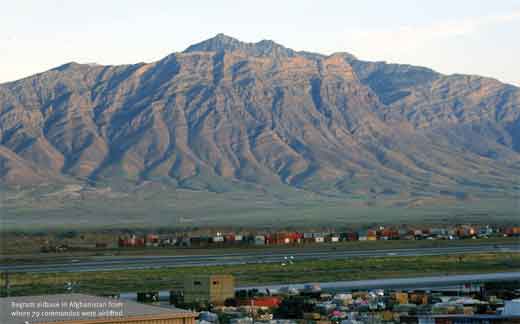 The Pakistani town of Abbottabad is named after a Major James Abbot who established the district of Hazara in 1853. Known for its salubrious weather, Abbottabad is a quiet army cantonment town 50 km North East of Islamabad which has housed many army regiments including some of the Indian Army’s Gurkha battalions since the beginning of the 20th century. Devastated by an earthquake in October 2005, Abbottabad appeared briefly on world consciousness and then faded away from the media glare only to burst on to the world stage on May 02, 2011, when US Navy SEALs attacked the hideout of Al Qaeda leader, Osama bin Laden and killed him. Abbottabad’s place in history is assured for the foreseeable future.

On May 02, 2011, President Obama informed the world that in a special operation conducted by the United States forces, Osama bin Laden, the leader of the Al Qaeda terrorist group that was responsible for the 09/11 attack on the World Trade Centre, was killed. At around 0100 hours local time the Central Intelligence Agency (CIA) planned and carried out the attack on Osama bin Laden’s hideout in Abbottabad by a heliborne force of US Navy SEALs supported by CIA operatives on the ground. The SEALs were from the US Naval Special Warfare Development Group of the Joint Special Operations Command (JSOC).The attack force of 79 commandos were airlifted from Bagram airbase in Afghanistan in two specially modified Black Hawk helicopters of the 160th Special Operations Aviation Regiment (SOAR) of the US Army Special Operations Command. Three Chinook heavy lift helicopters were also used for air support. The operation was supported by fixed wing fighters as well as combat search and rescue helicopters of the US Air Force. One Black Hawk helicopter was damaged during landing and had to be destroyed by the SEALs to prevent any sensitive technology falling into the wrong hands. The mission was accomplished with no loss of American lives.

Does the Indian Prime Minister or any other Government agency have the legal sanction to be the judge, jury and executioner of the enemies of the country? Kasab and Afzal Guru are still alive!

However, an Abbottabad type of mission is more than mere low flying in low light conditions and engaging a target. Success of such a mission is contingent on a combination of factors – primarily, the determination of the political leadership to authorise the operation being well aware of the diplomatic and political fallout of a possible failure, obtaining accurate intelligence of the location and layout of the target, penetration of Pakistan’s air defences undetected, delivering troops on an unprepared landing area, securing the assistance of local operatives, completing the mission and extricating the attacking force. To the media, which had built up Osama bin Laden’s image as a “super villain”, and to the US his elimination was seen as a national and inevitable triumph of good over evil.The Indian Army and the Indian Air Force do have valiant men willing to undertake such a dangerous mission but does the nation possess the political will and the politico-military- intelligence interface to execute such a mission?

The elimination of Osama bin Laden was the culmination of a political vendetta initiated by President Bush. After 09/11, he had vowed to hunt down the terrorists responsible for the attack and “smoke them out of their holes.” In October 2008, Presidential candidate Obama had pledged that “capturing or killing Osama bin Laden was a critical aspect of stamping out the Al Qaeda” but there appeared to be no movement in this direction during the early part of his Presidency. Domestic politics and foreign policy issues seemed to be the prime focus of the current American administration. In the recent past the US media had questioned the progress made on this pledge by President Obama during his election campaign but the President had given no details of how he would succeed in his mission.

Pakistan and the United States are not at war; and are even allies in the war against terrorism yet America violated Pakistan’s sovereignty…

It is now obvious that the Central Intelligence Agency had relentlessly been making efforts to track down and eliminate Osama bin Laden. Five months after taking over as the President of the United States, Barak Obama instructed CIA Chief, Leon Panetta to provide within 30 days a detailed operational plan to locate and bring to justice Osama bin Laden. As political stakes of such a mission are high, failure would have spelt the end of President Obama’s political career and his aspirations for a second term as President. Jimmy Carter paid the price for the failed mission to rescue American hostages in Iran. On April 29, 2011, President Obama signed the final order authorising the operation which was tantamount to issuing the death warrant for Osama bin Laden.Would any Indian Prime Minister issue such an order knowing fully well the implications of failure and placing at risk the office of the Prime Minister and the political party in power?

The Legality of the Operation

On September 14, 2001, the United States Congress officially declared war on terror by passing the Special Resolution 23, Authorisation for Use of Military Force in response to the 9/11 Attacks (PL 107-40). Section 2(a) of the resolution states, “The President is authorised to use all necessary force against nations, organisations, or persons he determines planned, authorised, committed, or aided the terrorist attacks that occurred on September 11, 2001, or has harboured such organisations or persons in order to prevent any future acts of international terrorism by such nations, organisations, or persons.” The President of the United States had the constitutional carte blanche to conduct military operations against any or all terrorists who have any connection, however slim, with the 9/11 attacks. This law allows the US President to use military power against individuals despite the earlier ban by President Gerald Ford and President Jimmy Carter on political assassinations. In effect, it gave the US President the authority to order the elimination of a terrorist organisation and terrorist leaders. 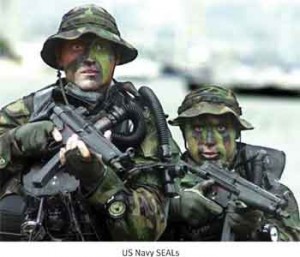 Does the Indian Prime Minister or any other Government agency have the legal sanction to be the judge, jury and executioner of the enemies of the country? Kasab and Afzal Guru are still alive!

Pakistan and the United States are not at war; and are even allies in the war against terrorism yet America violated Pakistan’s sovereignty and carried out a cross border air strike within its territory. Technically, the mission was carried out by the CIA with US troops attached to the Agency and not by the US Armed Forces. Since CIA operatives participate in anti-terrorist operations in Pakistan, though in collaboration with their forces, this intrusion into Pakistan was conveniently not seen as an act of war. In any case, Pakistan cannot declare war against the United States. In response to General VK Singh and Air Chief Marshal PV Naik’s statements about India’s ability to carry out a strike mission against terrorists, Pakistan Army Chief General Ashfaq Parvez Kayani called a meeting of his corps commanders in Rawalpindi and warned that the Generals take “a serious note of the assertions made by the Indian military leadership about conducting similar operations. Any misadventure of this kind will be responded to very strongly. There should be no doubt about it.”

If India was to form an independent Special Operations Command it would be at the cost of depleting existing Army, Navy and Air Force units or creating a new force.

Was it sabre rattling by Pakistan or can the Indian Government order an Abbottabad type operation violating Pakistan’s sovereignty without an escalation to war?

The success of the Abbottabad mission can be largely attributed to correcting the mistakes made in April 1980 during Operation Eagle Claw ordered by President Carter where an ad hoc joint task force was tasked to rescue American hostages being held in the US Embassy in Teheran. The highly complex mission was planned over two nights and involved six helicopters landing at a hiding site near Teheran, a ground assault of the American Embassy building, capture of the Manzariyeh air base and recovery of the hostages by a C-141 heavy lift transport aircraft. The mission was a complete disaster and the operation had to be called off due to the collision of a helicopter and a C-130 Hercules aircraft at the first staging post, Desert One. A high powered team led by Admiral James Holloway (Retd.) made an independent appraisal of the rescue mission for improving future US counter terrorist capability and conducted an examination of the planning, organisation, coordination, direction, and control of the mission to recommend improvements in these areas for operations in the future.

The Holloway report’s main recommendation was the establishment of an independent counter terrorist agency with permanently assigned personnel and assets. Over the years this evolved into the US Joint Special Operations Command with its own land, sea and air assets placed under a unified command with responsibility for conduct of all special operations. Currently, the Indian Army, Navy and Air Force train personnel for Special Operations but they are used more as an adjunct to the normal operations. If India was to form an independent Special Operations Command it would be at the cost of depleting existing Army, Navy and Air Force units or creating a new force. Both options would trigger intense turf battles amongst the Services.

Does India need to have a dedicated Joint Operational Command and if so, how should it be formed?