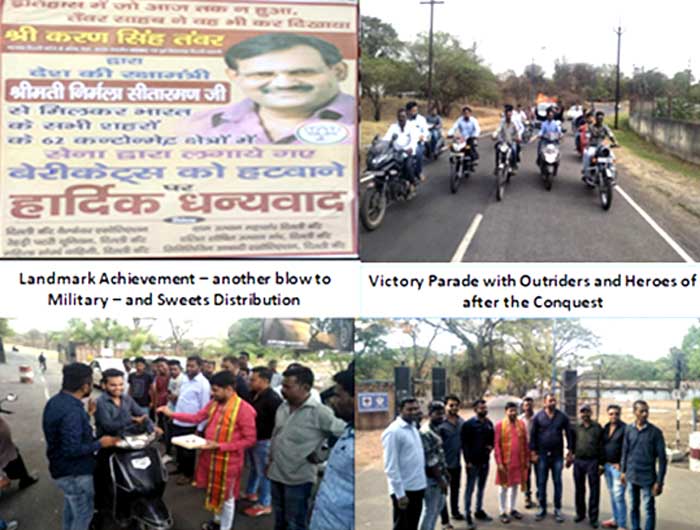 The recent unilateral decision by the defence minister in opening army cantonments across the nation, without taking the views of the army hierarchy, solely based on inputs from the Defence Estates Officer (DEO) and MPs is a major retrograde step. As per press reports this decision was taken unilaterally based on requests from MPs of the concerned areas.

MPs, being politicians are only concerned for votes, rather than on understanding the reasons for the army decisions and national security. For them, any decision which would get them a few additional votes is all that counts. Hence, there were celebrations outside cantonments by political parties, all claiming they had the cantonments opened.

Unilateral orders issued were clearly aimed at appeasing the public and local politicians. The army was told to open all roads, remove their checks and barriers and stop questioning or checking vehicles. It is surprising in the present context when even major hotels and malls insist on security checks, including in cars and two wheelers, that the army was instructed to ignore it, remove all barriers and permit free movement.

This decision resulted in a major backlash not only from veterans Army personnel themselves are bound to maintain silence. Apart from sending a letter to the defence minister, the families decided to meet her and press their demands on the lack of security which would flow from her decision. A report in the Financial Express of 28th May stated that the defence minister was willing to reconsider her decision, based on the backlash of her rushed action.

The issue of movement control in cantonments only commenced post the growth of militancy and increasing attacks on military installations. Despite everything, major roads transiting through cantonments are always open to the public, smaller roads are restricted or blocked. It did create problems for residents, whose colonies had mushroomed around cantonments, but were essentially for security reasons.

Cantonments have existed since pre-independence era, are self-contained entities and managed jointly by the DEO and the army. A tussle always exists between the two as the DEO is placed as an independent authority directly under the control of the MoD. Some responsibilities are demarcated, while some are to be managed jointly. Security is always the army’s responsibility, mainly because the cantonment had multiple establishments spread through it, some small and some large. It also has residential areas widely dispersed and, in many cases, unprotected. Free and unchecked movement is always a security risk.

While the army avoids interacting with politicians, the DEO interacts with them and civilian residents as they are part of his responsibilities. Being a civilian cadre, the DEO is naturally influenced by political authority and pressures. Since security is not their responsibility, they would invariably seek to support the public against the army, rather than processing the army’s viewpoint.

It is to ensure security of smaller garrisons and family accommodation within large cantonments that some roads were not designated for civilians. This made managing security easy, as lesser number of troops were required for monitoring. It is a known fact that militants would always seek easy targets and family accommodation are always the easiest, Nagrota, Jammu, Samba and Satwari are examples. Interestingly the Government order excludes Jammu and Srinagar from opening its gates.

In many cantonments, separated family accommodation is occupied by those serving on the border or in insurgency areas. Most families are neither residents of the state nor know the local language. They reside here mainly for education purposes and the fact that their husbands last served here. Further, within cantonments they feel secure being alone with small children, as also are confident that their basic amenities would be cared for. Any militant strike on families always impacts morale of the soldier.

Blocking or restricting move on roads would be a hinderance to those residing close, but as the Indian public has more concern about themselves than the army or the nation, this issue had been flagged to the MoD. Taking a unilateral decision on opening of roads, implications of which is completely lacking within the MoD is solely aimed at securing vote banks.

Further this unilateral decision conveys a message to the nation, that the government has no care of its soldiers or families but only for those from whom it could obtain a few votes. It is like the Government showing its broad chest on surgical strikes, during election campaigns, while denying those who conducted it their rights, including OROP, NFU and even rations.

It has failed to realize that in case crime rates in cantonments go up and families living alone are targeted, either by miscreants or militants, due to lack of checks, then it would impact military morale and adversely affect votes from the military community which has placed its complete trust on the present leadership.

Ideally, the Government should have been more mature and asked army authorities to review their decision on closure and seek to close minimum roads after due discussion with local political and residential authorities. It is the commander on the ground who is the best judge, not the MoD in Delhi, acting on the advice of the DEO and requests by MPs. A final call could have been made post such a review.

Its haste in passing instructions has resulted in the entire military community, serving and retired, becoming anti-government. This community accepted a poor OROP, no NFU and even removal of entitled rations in silence, but this is possibly the last straw as it impacts security of families residing in segregated lots. To announce within days of issuing a unilateral order, that it is considering reviewing it, indicates a lack of purpose and perspective on the part of the minister and her bureaucrats. The MoD as usual has proved its fickle mindedness and immaturity in decision making.

2 thoughts on “Opening of Army Cantonments”