Oli in India - A ''Reset'' in Bilateral Ties 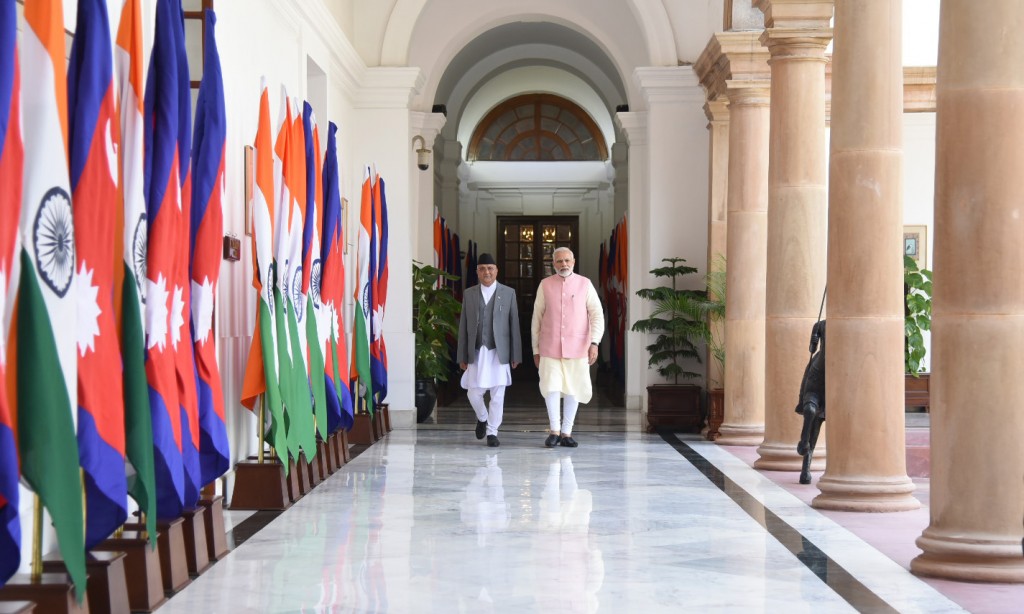 It came as a matter of some relief and satisfaction that Khadga Prasad Sharma Oli, the new Prime Minister of Nepal chose India as the first country of his foreign travel (6-8 April) after being sworn into office following the recent elections. Being cognizant of his tilt towards China and the highly critical anti-Indian statements made by him during the elections, there was considerable apprehension in India that he might notobserve the tradition of making India the first country of his visit but instead might give the top billing to China. That Oli came first to India provided reassurance as well as gratification to the political leadership in India as also to large sections in the country that support a strong India-Nepal partnership.

Discussions held during the visit and Agreements signed at the conclusion of the official talks give ample reason to both sides to be pleased and declare victory. The final outcome was a win-win result both in optics as well as in substance.

Relations between India and Nepal have never been easy.There have been good periods and also times when relations have touchedthe nadir. The last three years since Prime Minister Modi assumed power in India have witnessed a roller-coaster ride in bilateral engagement.

Modi chose Nepal as the second country of his visit in the neighbourhood in August 2014, within two and a half months of coming to office. This visit was the first bilateral visit by an Indian Prime Minister to Nepal after 17 years. Before his own visit, Modi had dispatched External Affairs Minister Sushma Swaraj to Kathmandu to co-chair the Joint Commission between the two countries which met after a hiatus of 23 years.

Modi’s visit was immensely successful in removing the long-standing distrust and suspicion between the two countries. However the new found sentimentof bonhomie and confidence was short-lived. It all but evaporated when Modi made his second visit to Nepal to attend the SAARC Summit in November, 2014. Since then, the relationship has witnessed a constant downhill slide, notwithstanding the prompt and massive assistance extended to Nepal when a catastrophic earth-quake struck the small Himalayan nation in April 2015. The Nepalese people were exceedingly incensed and miffed at the aggressive, obtrusive and insensitive coverage of the earth-quake by the Indian media. This was quickly followed by the visit of Foreign Secretary S Jaishankar in August 2015, just a few hours before Nepal was to adopt its constitution, with the suggestion that it delay theenactment of the document and incorporate provisions to allay some serious misgivings of the Madhesis, Janjatis and Tharus. As could have been expected from a self respecting nation, this blatant interference in its internal affairs was summarily rejected by Nepal.

The subsequent Madhesi agitation resulting in a blockade and immense hardship to the common people in Nepal was also seen as evidence of India’s arrogance and insensitivity to Nepal’s interests. India tried to explain that it was suffering as much as Nepal on account of the blockade because all perishable goods like fruits and vegetables in the trucks were getting destroyed resulting in heavy losses to the traders. But this failed to cut any ice with the Nepalese leadership or common people on the streets of Nepal. This saw bilateral ties dipping to an all time low in recent years. Perception in Nepal that this was an India-engineered blockade was deep-rooted and strong and India’s arguments could make no dent in lessening the seething wrath and anger of Nepalese people against India. KP Oli who was then in his first term as Prime Minister, veered towards China but was soon forced to tender his resignation as his coalition partners deserted him because of the worsening relations with India.

Now in his second term, which he won with a resounding majority against the Nepali Congress, traditionally seen to be closer to India, Oli decided to start his innings by trying to mend fences with India.

Oli’s earlier experience would have brought home to him that while ideologically and politically, closer relations with China might give him some comfort, there is no alternative toIndia as far as Nepal’s economic well being and development is concerned. Making virtue out of necessity, Oli has played the ‘’China card’’ deftly to wrest several ‘’game changing’’ benefits and advantages from India. Oli would have realized that in spite of any financial support that China might be willing to provide, import of basic necessities including petrol, gasoline etccould be made only from or through India for them to be viable and sustainable. Moreover it was in Nepal’sinterest to have cordial and friendly relations with both India and China to reap the maximum benefits and advantages for the country. Going into the Chinese camp and having hostile relations with India would not be productive, either politically or economically or in terms of stability for Nepal. Oli made a dexterous political move by first visiting India and trying to get as much gain and advantage as he possibly could. In this he has been eminently successful.

India also considered it to be in its own best interest to mend fences with Nepal and establish bilateral ties on a sure and stable footing. Having good, productive relations with neighbours is the first mantra of Modi’s ‘’Neighbourhood First’’ Policy.Prime Minister Modi has sought to reach out to each and every one of India’s neighbours since he came to power. He has devoted adequate time and attention to promoting relations with all of India’sneighbours. Most of these initiatives have delivered positive results. Some like Pakistan and Maldives have proved to be intractable thus far. It must have been considered that in addition to the cultural, historical, civilisational, ethnic and religious linkages that bind India and Nepal together, there are several more strengths, particularly in economic, connectivity and infrastructural fields, which can be used to mutually advantageous outcomes. This would also significantly contribute to lessening Nepal’s leaning towards China and weave India and Nepal into a mutually beneficial interdependent relationship.

The visit has yielded significant and substantive results. In addition to the game changing agreements entered into between the two sides including constructing an electrified railway track between Kathmandu and Raxaul on the Indian border, financed by India; use of India’s inland waterways to provide connectivity to Nepalese cargo and passenger traffic; and, advanced cooperation in the area of agriculture, the most consequential outcome is that it represents a first, but a very significant step, in removing mistrust between the two countries and establishing a relationship based on equality, respect and mutual benefit. Oli expressed his deep appreciation for the game changing initiatives by India in the areas of inland waterways, rail connectivity and agriculture to further enhance bilateral cooperation.

There is still a considerable way to go to realize the final outcome. The enthusiasm that both sides have displayed in reaching out to each other is evidence that they are serious in working together to realize the full potential of this partnership in political, strategic, economic, cultural, business and investment areas. India left no stone unturned in spreading the red carpet for Oli. He was invited to stay at the Rashtrapati Bhavan which he acknowledged was a singular honour. He was received at the airport by Minister of Home Affairs Rajnath Singh, who is second in the cabinet, next only to PM Modi. In terms of projects, significant forward movement has taken place in constructing transmission lines for power exchange between the two countries. It can be expected that considering the impressive record of Modi government in executing projects on time, the Kathmandu-Raxaul railway line and the decision on conducting inland waterwayscommerce will also be taken up expeditiously. The two sides also decided to take all steps to stop the misuse of open borders between the two countries including smuggling, human trafficking, drugs, fake Indian currency etc. In his Statement to the media, PM Modi expressed the hope that Oli will carry all segments of society in social and economic development. He assured Oli of always standing with Nepal as a reliable partner.

Seriousness of KP Oli to take the partnership forward substantively is exemplified by the large ministerial, parliamentary and business delegation that accompanied him. Ministers heading portfolios of Foreign Affairs, Industry, Commerce, Supplies, Physical Infrastructure and Transportetc were part of the contingent.

Some comments have surfaced in the local media about Oli raising the issue of hosting the next SAARC Summit in Islamabad. This is being seen in light of visit of Pakistan PM Abbasi to Kathmandu just after Oli assumed office. It would be a mistake to see this as emergence of a nexus between Pakistan and Nepal. Nepal is the current Chairman of SAARC. In that capacity it was its duty and responsibility to discuss the holding of the next SAARC Summit with his hosts. India responded to him directly that it was not possible to go ahead with the SAARC Summit under present circumstances. The matter should be seen to rest there. Oli made positive references to BIMSTEC of which also Nepal is the current Chair, and to cooperation amongst BBIN. India reaffirmed its commitment to supporting and promoting all regional cooperation and connectivity issues.

In his meeting with the business community, Oli invited the Indian entrepreneurs to invest in Nepal. It is likely that Indian enterprises will feel encouraged to enhance their partnership with Nepal because of improving relations with India and also more stable and conducive domestic conditions.

China did not come up for discussion in the bilateral Talks. This is evidence that the two countries focussed on leveraging the mutual strengths of the partnership to take the relationship forward and were not guided by any extraneous factors.

The visit can be considered to be highly successful and game changing because in addition to the various Agreements signed on extension of railway network, agriculture, and use of inland waterways etc, it went a considerable way in clearing misunderstanding and fostering trust.  It was a forward-looking visit which while acknowledging the pitfalls that had bedevilled bilateral ties in the past took a conscious decision to treat each other with respect and consideration.