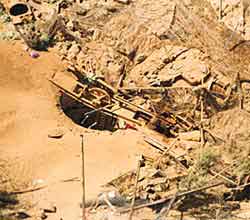 The proclaimed benefits of the Indo-US nuclear deal are unexceptionable. Firstly, we would become eligible to receive nuclear fuel from the Nuclear Suppliers Group. This would enable us to build and operate nuclear power plants. The power plants are – it is stated – required to meet the shortfall in electricity production and also provide our rapidly growing demand for energy.

Secondly, the deal would also enable us to access nuclear processing technology. The spillover benefits of such technology would be considerable.

If all the arguments against the deal were to be objectively examined it would be apparent that the concerns revolve around the basic issue of our strategic nuclear weapons capability.

Thirdly, we would gain entry – maybe somewhat informally – into the exclusive club of nations possessing nuclear weapons. Lastly, and perhaps most importantly, is the prospect of placing our strategic relationship with the world’s sole superpower on a higher plane.

Notwithstanding the obvious advantages of the deal, there is considerable opposition to it. The Nation would be faltering if the arguments against the deal were not listened to or were not critically examined. Brushing aside issues merely on the grounds that the person making the observation is commenting on matters outside his or her field of expertise would reflect a clear lack of maturity and more importantly – may lead to compromises on matters affecting national interests.

After over a year’s debate within the US, the Hyde Bill has been passed. Consequently, we must accept and recognise that the Indo-US nuclear deal would be governed by this law. It cannot be wished away. Therefore, we have to be very careful when we enter the domain of what is “ binding” and what is not binding in the Bill. We must also not forget that if the US is genuine about a long-term strategic relationship with us then it should be in its interest to assist us in our force acquisition plans and not to somehow sabotage it.

Fundamentally, what is at stake? At stake is the future of our nuclear weapons programme and thus the matter of our strategic autonomy and the sovereign right to seek to build such strategic autonomy. If all the arguments against the deal were to be objectively examined it would be apparent that the concerns revolve around the basic issue of our strategic nuclear weapons capability. Is the de!sired capability being compromised? To answer this question there must be clarity on what ought to be the desired capability. This is the nub of the matter.

Now if we go back to the Hyde Bill and to the contents of the Indo-US nuclear deal, all the issues that appear objectionable to the critics are those that directly or indirectly impact on our future nuclear weapons capability.  So we must first address the core issue. What should our nuclear weapons arsenal look like in the future – say 20 to 25 years from now?

Most global watchers currently tend to concur with the prediction made by a reputed consulting firm that by 2025 to 2030 India would emerge as the third largest economy in the world. The US would be retaining its position of being the largest economy and China would be close to catching up. In India itself this conviction is taking firm root within and outside the government. That is why we often hear of the prediction that if our mismanaged states like UP, Uttaranchal, Bihar, Jharkhand, Bengal, Orissa , Madhya Pradesh and Chhattisgarh  got their act together and stepped up their growth rates to say 6%, the country then would be witnessing an annual increase in our GDP of about 14 to 15 %. And if that happens we would be competing with China for the second place.

As a first step we should aim at creating a nuclear force that is sufficiently potent to deter other nuclear weapon powers from attempting to coerce or threaten us.

The other vital consideration that we must factor into all our planning is that in the next two decades or so we would also be the most populous nation in the world. And this population would be relatively young and not be averse to migration. So our diaspora can be expected to expand and spread.

What does this economic ascent imply? It implies global interests and responsibilities. It also implies a greater leadership role – internationally. And much as we may wish to preach – non-violence, peace, cooperation and friendship amongst nations, we have to be pragmatic about the real world. That implies the capacity to protect our interests and not be vulnerable to coercion and threats of use of force that may lead to compromising on issues that affect us. As a matter of fact where necessary we must be capable of using force or its threat to advance our interests. This force- must, progressively be built-up in tandem with our economic growth. The principle is simple: our force projection capability must move in synch with our enlarging economic sphere of influence.

After Hiroshima and Nagasaki nuclear weapons have become the ultimate in the dialectics of military muscle. Conventional military forces are worthwhile only against adversaries who do not have nuclear weapons. To belong to the big league a nation needs both conventional and nuclear forces.