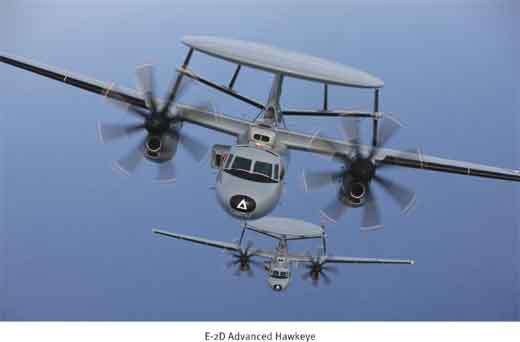 When Leroy Grumman founded the Grumman Aircraft Engineering Corporation on Long Island, New York, in 1929, little did he realize that the company would still be going strong more than 80 years later.

Jack Northrop was an innovator with a skill for designing aircraft. He founded his first company in 1928 where he conducted research for the first all-metal aircraft and the “flying wing.” This research and innovation would eventually lead to the revolutionary development of a flying wing bomber.

Through the years, Northrop Grumman has made series of successful, strategic business acquisitions, transforming itself into a leader in technology and innovation…

The innovation and determination that launched these early companies so many years ago, led to the world-class enterprise that became known as Northrop Grumman Corporation in 1994. Covering the full-range of defence and security hardware, software and services from under the water to outer space to cyberspace, Northrop Grumman’s historic accomplishments range from transporting Charles Lindbergh across the Atlantic to carrying astronauts to the moon’s surface and back to earth.

Through the years, Northrop Grumman has made series of successful, strategic business acquisitions, transforming itself into a leader in technology and innovation in the United States aerospace and defence industry. The combined, historical achievements of all of these companies is the foundation on which the Northrop Grumman of today is built.

Northrop Grumman and US Naval Aviation share a long, and rich, history. Northrop Grumman is the longest running provider of aircraft to the US Navy, having manufactured its first fighter, the FF-1, for the Navy in 1932. That first successful aircraft design progressed through various improvements, resulting in the F4F, Grumman’s first fighter with folding wings. This folding wing design allowed the Navy to store twice as many aircraft on its carrier decks than previously and began a proud legacy of the company, which began with the FF1, that has continued through the decades to include a multitude of fixed-wing aircraft – F6F Hellcat, A-6 Intruder, E-2C Hawkeye, F-14 Tomcat, C-2A Greyhound – for a multitude of missions.

Northrop Grumman has a presence in every military domain and an in-depth knowledge of specific platforms and customers requirements and tactics within each domain. It couples its systems integration expertise with the technologies and capabilities and international industrial partners to provide effective, integrated solutions for all of its customers.

The E-2 Hawkeye is in use with more customers worldwide than any other such systems and, because it was designed from the beginning as military aircraft, it can withstand the most demanding operational environments.

The E-2 Hawkeye airborne early warning & control (AEW&C) aircraft, which took its first flight in October 1960, has undergone several, incremental configuration upgrades over the years. In building on the legacy of providing world-class AEW&C capability, Northrop Grumman worked closely with the US Navy to ensure they had the expanded battlespace and situational awareness required for today’s and tomorrow’s mission. The result is the E-2D Advanced Hawkeye which features completely redesigned aircraft systems, a state-of-the-art AN/APY-9 Electronic Scan Array radar and a new glass cockpit. All E-2D’s are newly manufactured aircraft based on a proven platform.

The APY-9 radar, exclusive to the E-2D Advanced Hawkeye, has the capability to “see” greater numbers of smaller targets at a greater range. With its two-generation leap in capability, the E-2D provides the most technologically advanced command and control capability available, with the ability to collect data and supply information to naval and joint forces well ahead of engagement. The new rotodome allows for three modes of operation including an electronically scanned array. Providing critically important, continuous 360-degree scanning allows the operator to focus on select areas of interest, vastly improving situational awareness.

The US Navy has stated it plans to purchase 75 E-2D Advanced Hawkeyes, of which five have been delivered, including the first E-2D to enter the Navy’s fleet, delivered in July 2010. Four of the aircraft are continuing flight test with the US Navy while aircrew training is being conducted on the fifth aircraft. Early 2011 will see the E-2D operating on-board a US Navy carrier for the first time. The E-2D program continues to meet, or exceed, all key program milestones with Initial Operational Test and Evaluation scheduled for 2013 followed by Initial Operational Capability with the US Navy in 2015.

The E-2 Hawkeye is in use with more customers worldwide than any other such systems and, because it was designed from the beginning as military aircraft, it can withstand the most demanding operational environments. The US Navy currently operates 66 E-2C Hawkeye aircraft. E-2’s are also operated by Japan, France, Egypt, Taiwan and Singapore. With one-third of the world’s E-2 Hawkeye fleet operated by other countries, a high level of international interest in the E-2D is anticipated, once it becomes operational with the US Navy fleet.

The RQ-4 Global Hawk enterprise carries the lineage of both targets and unmanned reconnaissance drones developed decades ago. The company’s history in developing systems to operate in the challenging maritime environment continues as it develops the next-generation maritime and unmanned aircraft systems. Global Hawk is the only unmanned aerial system (UAS) to meet the military and the Federal Administration Aviation’s airworthiness standards and have approval to fly regular flights within US airspace. The system is continuing its operational support having logged more than 10,000 combat flight hours with 95 percent mission effectiveness. 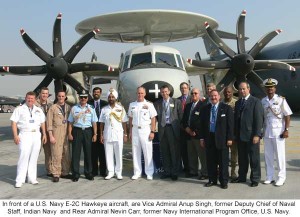 As with many of the platforms Northrop Grumman has produced over the years, the Global Hawk’s capabilities have been significantly increased through planned block upgrades that provide a more capable and more powerful unmanned surveillance system. The Block 20 Global Hawk represents a significant increase in capability over the Block 10 configuration. The larger Block 20 aircraft will carry up to 3,000 pounds of internal payload and will operate with two-and-a-half times the power of its predecessor. Its open system architecture, a so-called “plug-and-play” environment, will accommodate new sensors and communication systems as they are developed to help military customers quickly evaluate and adopt new technologies.

Northrop Grumman’s expertise in the design, development and production of unmanned systems is built upon the foundation of the former Grumman Aircraft Company. The company also provides the tools to help its customers successfully define and develop new concepts of operations that successfully integrate both manned and unmanned systems. The Broad Area Maritime Surveillance Unmanned Aircraft System (BAMS UAS) is the next generation of high-altitude, long-endurance UAS. 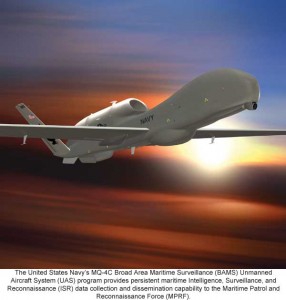 t is designed to provide the US Navy with persistent maritime surveillance and reconnaissance coverage of wide oceanographic and littoral areas. A maritime derivative of the combat-proven RQ-4B Global Hawk unmanned aircraft, the BAMS UAS is equipped with a 360 degree Multi-Function Active Sensor (MFAS) active electronically scanned array along with Navy-specific ground stations. It provides the most advanced autonomous air vehicle with a state-of-the-art service oriented architecture mission control system.

The high quality of Northrop Grumman’s RQ-4N BAMS UAS reflects Northrop Grumman’s long years of experience in the production of aircraft – including more than 100,000 UAVs. With its low total acquisition and system operating cost over the lifetime of the entire program, the BAMS UAS can deliver unprecedented long-range, persistent maritime ISR capability to the user. Construction of the first BAMS UAS began in September 2010 and the program will be undergoing a critical design review with the US Navy in mid-February. 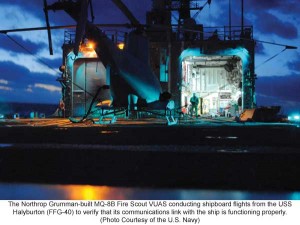 The MQ-8B Fire Scout’s multi-mission capabilities synchronizes soldiers and leaders, allowing the tactical users to see, understand and act first while finishing decisively. Its ability to operate at low ground speeds allows Fire Scout to move with soldiers in the field, and easily acquire and track targets in complex and urban terrain. Northrop Grumman is developing Fire Scout vertical unmanned systems for a variety of US and international military customers.

The Fire Scout is currently undergoing system test and evaluation with the US Navy in both land-based and shipboard environments with a decision on full-rate production expected in fiscal year 2012. A two-aircraft system of the Fire Scout is set to deploy on the USS Halyburton (FFG-40) in early 2011.  This will be the second “at-sea” deployment of Fire Scout.

The MQ-8B Fire Scout successfully demonstrates how the combination of manned and unmanned technologies can increase the capability and extend the mission capability of commercially available helicopters.

One thought on “NORTHROP: Achieving Partnership and Growth”