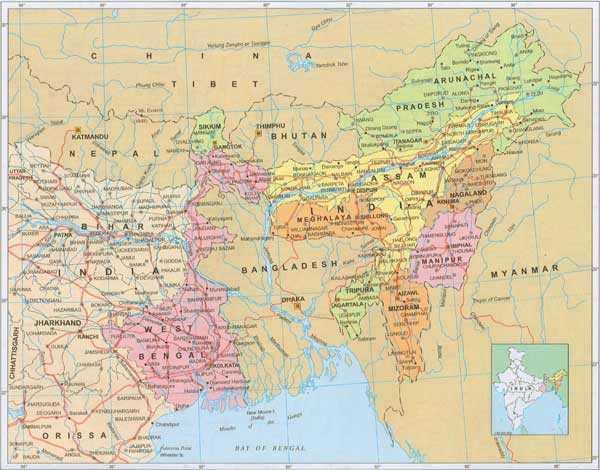 The extent of moral and material support by an external power(s) is one of the crucial factors for the success of any insurgency. The North-east insurgents have been particularly fortunate in having found sanctuaries or support in Bhutan and China in the North, Bangladesh in the South and Myanmar in the East. The insurgents have received moral and material support from China, Pakistan and Bangladesh at some time or the other.

The sanctuaries in Bhutan and Myanmar have, however not been the outcome of any adversarial or hostile relations between them and India, but because of the inability of their governments to adequately administer the border areas or deal effectively with the hostile activities of the Indian insurgents inside their respective borders.

The Idea of A Crown Colony

The British on the eve of their departure from India had recognised the strategic importance of the North-east as a springboard for wielding influence not only in India and Myanmar but also in parts of China and Tibet. They tried to convert the tribal areas as a new bastion of imperialism. To give shape to this plan, Professor Coupland suggested the creation of the ‘Crown Colony of Eastern Agency’ consisting of the hill areas of Assam and Myanmar, which would in due course, be an independent state. When Naga leaders were consulted, they rejected the idea outright. Almost coinciding with the demand for the secession of Naga Hills from India, a group of Mizo feudal chiefs, known as ‘sailos’ under UMFO raised the slogan of integrating Mizo Hills with Myanmar.

When the Nagas rebelled against India, Pakistan found an ideal opportunity to take advantage of the situation. Naga rebels were the first to receive moral and material support from Pakistan…

McCall, the District Commissioner of Lushai Hills (1932-43), initiated a plan for grouping of hill areas in Eastern India and Northern Myanmar under the trusteeship of the League of Nations. His successor Macdonald floated the idea of carving out an autonomous state comprising Mizo Hills and portions of Myanmar extending up to the Bay of Bengal, which was to be a protectorate of the British Government.1 The scheme of separating the hills of the North-east from India could not fructify partly because of Myanmar’s Prime Minister U Nu’s attitude on the issue, and partly due to firm declarations of Indian leaders perceiving such move as hostile actions vis’-a-vis’ the new government.2 Although the above proposals did not fructify, the idea formed the breeding ground for the problems that confront the region today.

The Western Perception of North-east India

Equally significant was the perception held by other Western powers about North-east India. As early as 1966, reports were circulated by Agencia International de Prensa (International Press Service) datelined Dacca that there were reports to create a ‘United Independent Bengal’ comprising East Pakistan, West Bengal, Assam, Tripura, Sikkim and Bhutan. The report said:

“The separatists are counting on USA and other Western powers to give them necessary assistance. They are confident that these powers would be interested in establishing an independent state in South-East Asia, which could help to normalise conditions there and which could provide shield against the Chinese aggression…”

It is in this context that the circular from United States International Communication Agency issued in June 1979 entitled ‘Project Brahmaputra’ is significant. The circular was sent to all their branches in Delhi and Calcutta informing that the special research cell of George Washington University, with the approval of the State Department had detailed several teams of investigators to conduct research in the North-eastern states, Sikkim and Bhutan. The purpose of the research was to ‘throw light on the public opinion in the region to establish in what measure the present status of these states remain acceptable or whether there are indications that the formation of a new state is a current problem.’3 Although the emergence of Bangladesh in 1971 and the rapprochement of relations between USA and China changed the geo-political scenario in this region, the Western perception of the tribal areas of India’s North-east, which is predominantly Christian, as being inherently unstable persists. Such a perception has had a negative effect on the psyche of rebel outfits and indirectly encourages separatism.

The Naga insurgency was Godsend for Pakistan, which had adversarial relations with India. It was almost a strategic compulsion for Pakistan to tie down maximum Indian troops in the North-east. When the Nagas rebelled against India, Pakistan found an ideal opportunity to take advantage of the situation. Naga rebels were the first to receive moral and material support from Pakistan, which had opened an office of assistant high commissioner in Shillong soon after Independence. Naga rebels used the office to establish contact with Pakistani officials in Dacca. Eventually, the commission’s office in Shillong was closed.

The British on the eve of their departure from India had recognised the strategic importance of the North-east as a springboard for wielding influence not only in India and Myanmar but also in parts of China and Tibet.

Pakistan’s support to Naga insurgency started after Phizo’s escape to East Pakistan. Phizo first attempted to sneak into East Pakistan through Burma in December 1952, but was captured by the Burmese. He was sent back to India, where he was taken into custody but was later released on compassionate grounds, as his wife had met with an accident. Phizo eventually crossed into East Pakistan on December 6, 1956 from North Cachar Hills. Phizo’s visit paved the way for others like Zhekuto Sema, director intelligence in the underground set up, Thungti Chang, an important Konyak underground leader, and Mowu Angami, then a young leader who later became the chief of the underground army, to visit East Pakistan in 1957. Mowu Angami was intercepted and arrested on August 10, 1957 on his way back, but was released soon after on amnesty. Assam Police intercepted Zhekuto and Thungti on their way back in July 1958 but Zhekuto was killed in that encounter.

The groundwork for receiving moral and material support from East Pakistan was done during these visits. Pakistan had created a special liaison cell for contact and coordination with Naga and Mizo rebels. Between 1962 and 1968 at least ten groups of Nagas had crossed into East Pakistan. Kaito Sema, then commander of the underground Naga Home Guards, led the first big gang of Naga rebels to East Pakistan in early 1962. This gang returned to Nagaland in March 1963 through the Chin Hills in Myanmar with loads of arms and ammunition. To demonstrate their strength they blew up the railway track between Rangapahar and Dhansiri railway stations on April 9, 1963.4 The next big gang of hostiles led by Dusoi Chakesang crossed into East Pakistan in October 1963, taking the longer Chin Hills route.

The gang returned in May 1964 with Rupees 30,000 in Indian currency and military hardware. Another gang of 300 under Yeveto Sema went to Pakistan for training in May 1964. Zuheto Sema led the biggest and most successful expedition to Pakistan in October 1964, after the suspension of hostilities brokered by the Peace Mission had come into effect. The gang consisted of 1,000 hostiles.5 They were given training on modern lines, after which they returned to Somra tract in Myanmar in March 1965, where they held on for a few months before trickling into Nagaland in August/September 1965.

India was then engaged in a war with Pakistan. Pakistanis were reported to have put pressure on hostile Nagas to open another front in their war with India, but the Nagas did not indulge in any violence; their decision was governed by political expediency as also the fact that the cessation of hostilities between security forces and underground Nagas was operative in Nagaland and they did not want to openly violate the provisions of the agreement. But to make amends, the FGN protested against the use of Naga troops in conflict with Pakistan.6

The subsequent efforts to send Naga rebels to East Pakistan were not successful. In November 1965, a gang of nearly 1,000 led by Mowu Angami, the chief of underground army, was intercepted by the Myanmar’s Army and was forced to re-enter India in Manipur. However, in another attempt in June 1966, a gang of 200 Naga rebels under Nedelie Angami exfiltrated through Mizo Hills and returned after training in November 1966 via Churachandpur and Tamenglong in Manipur.7

China’s motivation to support Naga insurgency converged with Pakistan. Both had antagonistic relations with India. China had border dispute with India and it claimed Arunachal as its territory and refused to accept McMahon Line as the boundary between them. It had fought a border war with India in 1962. The mid sixties was the period when ideological war between the communists and the Western democracies was at its peak. China viewed India as its rival in Asia and was giving full support to Naxalites in India. The tribes of the North-east were ideal targets for fanning insurgencies and keeping Indian troops tied down.

The Indian security forces had by 1966 greatly intensified surveillance of Indo-Pak border and it was becoming increasingly dangerous for the Naga rebels to cross the border into East Pakistan. The alternate route through Myanmar was also dangerous because the Myanmar’s Army had become very active and was alarmed by the nexus between Indian and Myanmar’s insurgent groups. But the increased surveillance of the Indo-Pak border was only one of the reasons for seeking Chinese support by the Nagas. Phizo had become disenchanted with the West and had begun to despair about their lack of support. He was desperately seeking to internationalise the Naga problem with the help of a powerful foreign ally. China was the obvious choice. The Chinese support to Naga rebels started towards the end of 1966.