Home  >  Spotlights  > Geopolitics  >  None in Pakistan can boast of Pristine Purity

None in Pakistan can boast of Pristine Purity 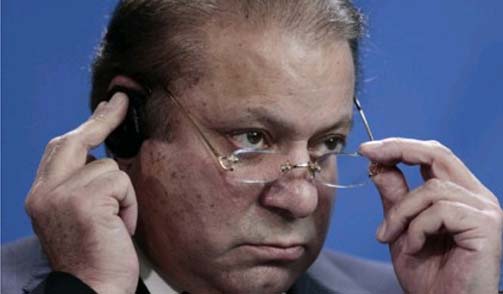 Even though the rabble rouse emanating from ousted Prime-Minister Nawaz Sharif’s road rally, has thus far been not as enthusiastic as anticipated , it would be foolhardy for political rivals to dismiss it off as a damp squib.  Hence Imran Khan is being mocked at by erudite Pakistani politicians for calling the Nawaz Sharif road rally “ corruption bachao  rally “

My advice to Imran Khan is to imbibe the spirit of the adage “ people living in glass houses do not throw stones at others “ Writing in Friday Times  of Aug 4, 2017 the veteran journalist Najam Sethi  states “ Given the logic of the present situation and legal reservations  Imran Khan and Jahangir Tareen too cannot escape the same fate ( same fate like Nawaz Sharif ) there are similar holes in their money trails. Indeed if Asif Ali Zardari is investigated, he too will have a hard time surviving the wrath of this sort of law. “

“The consensus in expert and  independent circles  is two fold and clear:  Nawaz Sharif has been stripped of the prime-ministership  on troublingly narrow legal grounds and the judgement has the undesirable potential to upend the democratic process in the country. In the circumstances Chief Justice Saqib Nisar ought to consider , following an appropriate petition convening full court to review the five member bench’s final judgement in the Panama Papers case. “ This editorial  in  Dawn  is very significant  for two reasons : firstly it speaks of  “ troublingly narrow legal grounds “  on which Sharif’s ouster has been done. Secondly, it demands a full bench Supreme Court Review of what some legal experts term as “miscarriage of justice.”

How  ironic  that one judge namely Justice Asif Saeed  Khosa, who had displayed no qualms  in deriding  Respondent no 1  i.e. Nawaz Sharif  and had not refrained from  keeping his anti-Nawaz Sharif biases  concealed ( even going to the extent of citing derogatory references from Godfather ) – happened to be the very judge , who in 2014 had described the terms sadiq and ameen  as obscure and impracticable in    the case which was petitioned by  Ishaq   Khan  Khakwani.  If indeed,  the  precise definition of those terms was obscure and impracticable, how did they get judicially applicable only for the ousted prime-minister.

Hamid Mir in an article in Dawn says “ is accountability  for politicians only. The law is equal for all politicians in the country but not for military dictators, following this development pressure will mount on the judiciary to  proceed  against former dictator Pervez Musharraf. The latter will have to appear before the judiciary, otherwise the current JIT and courts will be mocked in future. “

Even though it happened many years back that Pervez Musharraf  rode roughshod over all democratic institutions and earned the wrath of Chief Justice  Iftikhar Chaudhry by sacking him and installing in his place his own judicial  “yes men” the people of Pakistan have not forgiven him till this day.

It has been quite obvious to analysts, residents of Punjab and a certain section of the intelligentsia that two members of the JIT representing the ISI and Military Intelligence were primarily responsible for the anti-Nawaz verdict.

That  PML-N  had been a strong votary of transparency and sound democratic practices all through its tenures is manifest by the mere fact that it made no efforts to have Articles 62  and 63 excluded from the   Constitution. These Constitutional mandates, much like Article 58 ( 2 ) (b)  is vulnerable to being  misused to dismiss democratically elected governments  as evidenced by the past.  Art 58 ( 2) (b)  is a guillotine on Parliament’s sovereign authority –since it facilitates the dismissal of governments and therefore,  impinges on the sovereign authority of parliament.

Field Marshal Ayub Khan replaced parliamentary democracy with the presidential system under the 1962 Constitution. After this colossal damage, Gen Ayub Khan insisted on procedures to subvert parliamentary authority with veto powers, later Gen Yahya Khan continued with the same system during the 1970’s.

Gen Zia ul Haq, despite efforts on his part, was unable to abrogate the 1973 Constitution, but usurped through his “presidential prerogatives the powers of parliament  by inserting  Art 58 ( 2 ) (b).  Less than ten years after Zia’s death, the democratically elected government led by Nawaz Sharif ( in his second term as prime-minister ) had this Article removed , but Gen Pervez Musharraf  had the same reinstated vide the 17th Constitutional Amendment.

The 17th Constitutional Amendment was passed in 2003, after over a year of political wrangling between the pro and anti-Musharraf camps. It gave the latter power to dissolve the National Assembly and sack a government.

The desirability / or, undesirability of Art 58 (2) (b)  was one area on   which even rival parties like the PPP and PML-N were of the same view, that this Article hampers democracy, it is for the above reason they united to have it removed through their Charter of Democracy.

Imran Khan led PTI and PPP are rejoicing at the verdict and the latter is wooing  PTI to jointly work out an anti-PML-N  strategy. But Imran Khan needs a lot of explaining to the judiciary and the electorate at large.

Rawalpindi will become even more powerful since Shahbaz Sharif finds much greater favour with the military. Besides the military was always suspect of Nawaz Sharif’s softer stance vis a vis India. Even the forthcoming general elections regardless of the party which comes in government, the Generals will continue to have a field day. As such, I for one don’t see any perceptible improvement in the New Delhi –Islamabad equation.