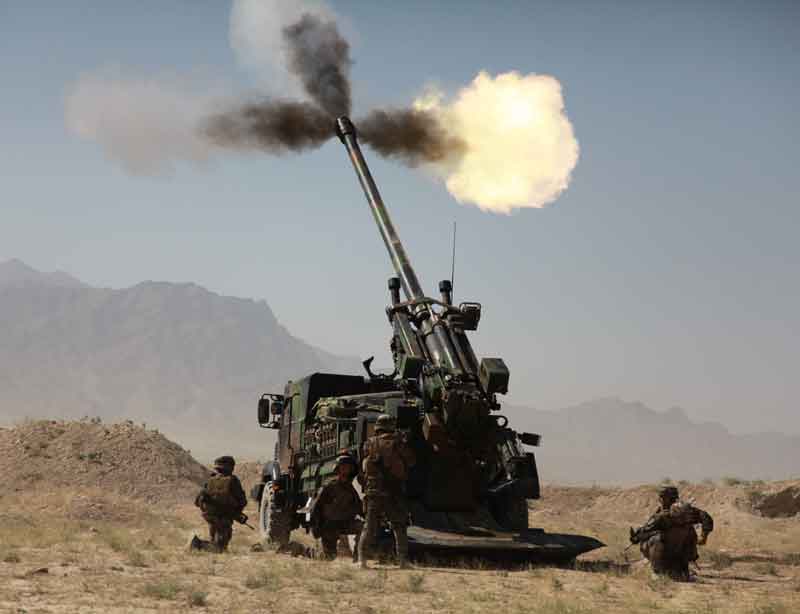 The combat proven, truck-mounted Caesar, which is performing superbly in Afghanistan

Many experts and talented observers predicted that towed guns would be completely replaced in coming decades by automotive-mounted arms, with truck-mounted pieces and howitzers seen as the preferred solutions. Nevertheless, there is still room for towed guns as some recent and ongoing programs have shown.

The lightness of towed guns remains a crucial element to consider for the rapid deployment or shipment by air of early entry forces from several formations: Special Forces, airborne, mountain infantry or marines corps. In regular mechanised forces, towed guns are still relevant in static combat situations, such as in some borders areas between India and Pakistan, for example. During the Kargil War, the Indian towed FH70, manufactured by Bofors, dominated their Pakistani counterparts which were not able to return efficient fire. Bofors were once very popular in the Indian market. The Swedish company invested millions in the design of its brand new FH77 155-52, and carried out no less than five live test campaigns in India under “no cost, no commitment” conditions. When the new tender was issued last year, it appears that the technical specifications were very different from the Swedish design, leaving Nexter and Soltam free to bid.

During the Kargil War, the Indian towed FH70, manufactured by Bofors, dominated their Pakistani counterparts which were not able to return efficient fire.

Nexter Systems is engaged in one of the biggest artillery programs ever. The Indian army intends to purchase hundreds of towed155 mmguns to replace old Russian designed assets, and to supplement the Bofors FH70 acquired in the ‘80s. Around 1350 pieces are to be manufactured under licence in India with the assistance of a foreign technology supplier. India is looking for a large spectrum of artillery assets to cover a wide range of missions. Beside the towed version, the Indian army has also launched four additional programs, all featuring the155 mmcalibre. These include truck mounted guns, armoured wheeled howitzers, armoured tracked howitzers and an ultra light gun able to be moved by a helicopter, for a total of more than 2200 pieces!

To design its new Trajan towed gun, Nexter Systems relied heavily on the combat proven, truck-mounted Caesar, which is performing superbly in Afghanistan from the FOB held by the French army. The Trajan uses the Caesar oscillating ensemble, namely the ordnance itself, the recoiling system, the shell semi-automatic loading mechanism, the azimuth and elevation drive system. The Trajan ordnance is 100% identical to the original Caesar design, with the highly reliable screw breech automatic locking and the two stage muzzle break. The INS is directly attached to the cradle in order to get the absolute positioning of the gun. The Caesar INS is a Sagem Sygma 30. Nexter has not confirmed yet whether the Sagem equipment will be selected for the Indian program, although Sagem is very active in India. 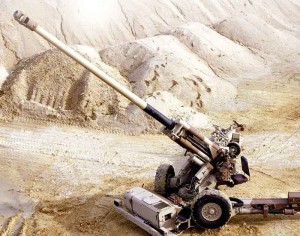 Larsen & Tubro will be the main industrial operator in India to manufacture the Trajan. The lower part of the Trajan will be designed by L&T under the supervision of Nexter, who will retain authority over the design of Trajan. This carriage will be inspired by the in house TRF1 155/39 calibre gun. This towed gun was successfully used during the first Gulf war in 1991 as the main artillery asset of the French motorised Dagaie division. The artillery system has also been exported to Saudi Arabia with the SA National Guard, and to Cyprus. The carriage will provide the gun with hydraulic energy for the azimuth and elevation driving and for the shell loading mechanism. A diesel engine embedded in a front box will drive a pump and a transmission. The Trajan will have a self mobility capability, able to move the gun for short distances. This has two main purposes: to set the gun in battery when it is released from its mother truck, and to change the firing position without hocking again.

Thanks to new high elasticity steel which reduces the weight of the carriage frame, the Trajan will move on a single axle, while many competitors have two. To fulfil a specific Indian requirement, the Trajan will be equipped with a small manipulating arm to carry shells from pallets or trucks to the firing position. This kind of equipment was already used on the Indian FH70.

India is looking for a large spectrum of artillery assets to cover a wide range of missions. Beside the towed version, the Indian army has also launched four additional programs, all featuring the 155 mm calibre.

Two prototypes are currently under production. The first one will perform an intensive qualification program in France. This will be quickly followed by a second, which will be manufactured in L&T facilities in India where it will be used for complementary trials under various climatic conditions.

Nexter might also offer its new Bacara battery fire control system. It is expected that the Trajan will be fully digitised with a derivative of the in-house Top & Ready ballistic computer which is aboard Caesar. The Indian artillery corps is still using rather old fire control systems inherited from the Soviet era. The artillery modernisation program requires quicker response times and MRSI capabilities, as well as, brand new guns. The performance of the French Caser has evolved during operations in Afghanistan, particularly target location and ballistic computation, to the point where it can open fire less than three minutes after target detection. It is very fast.

The French company has another interesting towed gun in its portfolio: the 105LG. This small artillery asset has been sold to six countries – Singapore, Thailand, Canada, Belgium, Colombia, and Indonesia. Saudi Arabia is looking for a similar system, and Turkey is developing its own system. The Turkish army is requesting a light support gun able to be moved under sling with a Sikorsky UH-60 Blackhawk helicopter. The role of this new artillery system will be to provide fire support to specialised infantry in the mountainous areas of Kurdistan and East Turkey. MKE, the Turkish state owned industrialist, is developing an indigenous design to meet the national requirement – with the help of 105 mm ammunitions supplied by Nexter Munitions.

The main European contender is the BAE Mk 119. It is in service in many armies, the biggest user being the US Army. Nevertheless, the success story of the British manufacturer is the M777. More than a thousand pieces have been ordered so far by the US Army, the Marines Corps, the Canadian army and the Australian army. India and USA are negotiating the purchase of 145 pieces under the FMS procedure. The M777 is extensively used in Afghanistan where it is generally moved under sling of a CH47. Despite heavy manpower and a low rate of fire, the M777 has proved to be a useful asset to provide fire support in complex areas such as mountains. Its efficiency is dramatically improved with the use of Excalibur GPS guided round.