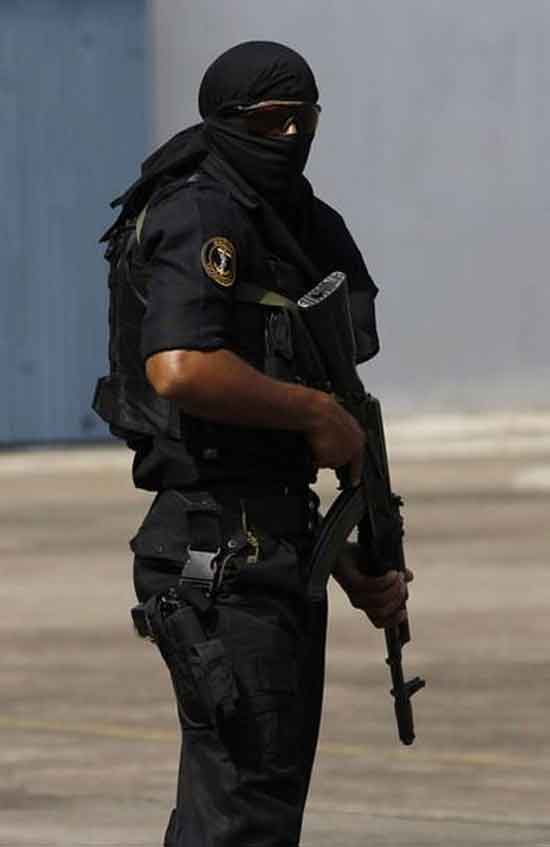 The need for Marine Commando (MARCOS) was first accepted in 1985 for the defence of offshore assets in Bombay High against clandestine attacks. The commandos’ task was to evict terrorists who had already taken over an oil production platform. Sanction was accorded for the raising of an “Indian Marine Special Force (IMSF)” and for commando version helicopters to fly them swiftly from Bombay to Bombay High.

Within two years their initial role widened. In end July 1987, the commandos accompanied the Indian Peacekeeping Force (IPKF) to Sri Lanka to deal with the secessionist LTTE’s marine elements that were operating in the shallow lagoons around Jaffna.

Marine Commandos are highly trained, elite ‘Special Naval Forces’ and can be recognised by their maroon berets and the commando badge over their name tally.

In 1989, the IMSF was renamed as the Marine Commando Force (MCF) and INS Abhimanyu became the parent (HQ) naval establishment for Chariot and Marine Commando operations. Abhimanyu is under the operational control of Flag Officer Maharashtra Area, who is responsible for the defence of Bombay.

In 1992, MARCOS East was formed and based at Vizag.

In order to infuse young blood, a voluntary category of commandos was introduced in 1995, termed as MARCO (General Duties) in addition to the existing MARCO (Advance) category who serve for 3 to 5 years.

The initial sanction for the IMSF was 38 officers and 373 sailors. In 1999, after seeing the effectiveness of the MCF in Operation Vijay during the Kargil war, sanction was accorded for an additional company of 29 officers and 246 sailors.

The MCF is organised as MARCOS East based at Vizag and MARCOS West based at Mumbai to cater for special operations on the Eastern and Western seaboards. In addition, one small MARCO unit has been based at Port Blair to meet the Special Ops requirements in the Andaman and Nicobar Command. 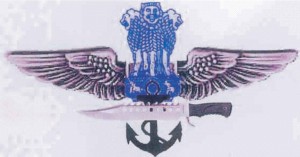 To develop combat efficiency, the Special Forces of various Navies were studied. The Prahar concept was introduced in 1992. A Prahar consists of 8 commandos.

After qualifying as MARCOS, officers and sailors remain in the MARCO sub-cadre for 3 and 5 years respectively.

The roles of the MCF are:- 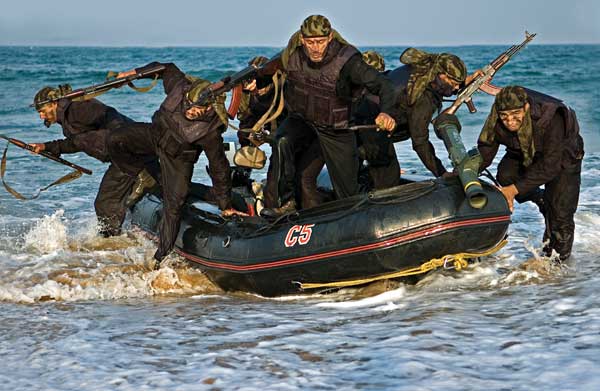 On completion of basic training, MARCOS join designated ‘Prahars’ for ‘on job’ and vertically specialised advanced training in:-

For special operations on land, MARCOS are required to be deployable from the sea and from the air. In the advanced phase MARCOS are trained in beach, coastal, riverine and jungle warfare. Candidates for advance training must have qualified in static line and freefall. The MCF is one of a handful of units in the world that is capable of para-dropping into the sea with full combat load and equipment. 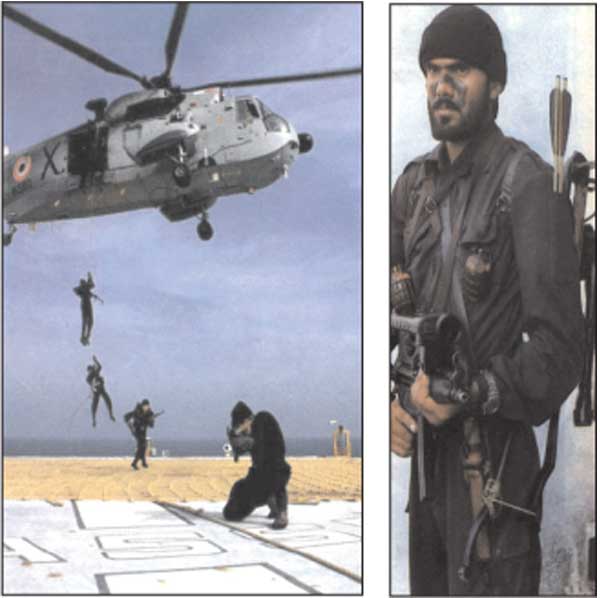 Interaction with Other ‘Special Forces’

In the initial years, a few officers underwent the  Explosive Ordnance Disposal (EOD) training in the United States. In 1996, MARCOS trained with SEALS of the US Navy and acquired capability for water-jumps-at-sea.1

To keep themselves combat ready, MARCOS participate in joint exercises and training with foreign and Indian Army Special Forces.

1991    Operation Tasha. Two Prahars were deployed off the southern Tamil Nadu coast to interdict LTTE infiltration and the smuggling of arms and ammunition.

1992    Operation Zabardust. MV Ahat, an LTTE vessel smuggling arms and ammunition was intercepted off Madras by MCF personnel. They boarded the vessel and captured all the mercenaries before LTTE sank the vessel.

1993    United Nations Operation in Somalia. Four teams of MARCOS were deployed off Mogadishu in support of the Indian contingent in Somalia. The team provided Maritime Special Ops support to the Naval Task Force.

1995    Operation Rakshak. Two to four teams of MARCOS are deployed round the year in Jammu & Kashmir, at Wular Lake. This 250 square km lake, surrounded by mountains, was being used freely by militants to reach Srinagar, saving them from having to travel 100 kms through the mountains. In 1995, a team of MARCOS was positioned at the lake and within weeks, militant activity on the lake ceased.

In subsequent years, in addition to meeting the requirement of deterring militants from using the Wular Lake, MARCOS started operating on land and Prahars killed several militants and recovered a large quantity of arms and equipment.