One of the most significant events in the recent times has been the commissioning of India’s nuclear submarine in July this year, even if she has a way to go before attaining op status. India has declared its intention of building a sea based deterrent as part of the triad. What are the challenges you visualize in creating this force, and in what time will we get there?

India’s Nuclear Doctrine calls for a minimum credible nuclear deterrent. The doctrine has been very carefully and aptly worded. ‘Minimum’ and ‘Credible’ imply that we must have a survivable triad, of land, sea and air based platforms that can deliver a second strike. Of these three type of platforms, the sea based variant is least vulnerable to detection and therefore the most survivable leg of the triad.

In this regard, the launch of the Arihant, by the Prime Minister in July 2008 is a significant milestone towards creating a robust sea based nuclear deterrent capability.

The induction of such a complex platform, which has been achieved through indigenous efforts, makes this achievement even more creditable. Neither the IN nor DRDO, underestimate the challenges that lie ahead in making this ’shark of steel’ dive deep and foray into the oceans.

Some of the challenges include proving of the new technology, getting the Arihant fully operational, developing doctrines and procedures, among others. We are actively working on all these issues, and more, to ensure that we have a credible deterrent in the form of Arihant and follow-on submarines.

Arihant, of course will take about two years of trials before she is inducted in the Navy. We will learn a lot from operating the Arihant, which would provide us with valuable inputs for our nuclear submarine programme.

The delays in the delivery of the Gorshkov/Vikramaditya, and the financial demands of the Russian Federation seemed to have strained Indo-Russian relationship somewhat. As an erstwhile Commander of a Soviet-built frontline warship what is your view of their naval technology vis-à-vis the West and how do you evaluate the prospects of future Indo-Russian Naval cooperation?

Firstly, let me clear the air regarding Indo-Russian relationship. Ours has been a time tested and enduring relationship and there has been no ’strain’ in the relations between the two navies. Let me also assure you that the Indian Navy is not going to settle down for anything which is not contemporary or expected to become obsolete in a few years. Price negotiations are part and parcel of any defence contract and that always involves certain amount of time for assessment of scope of work and estimation of funding required.

“”¦I can assertively state that Russian built ships are robust, easy to maintain, and dependable.”

I am pleased to inform your readers that the negotiations have progressed satisfactorily. It would be our endeavour and earnest effort to make good and compress the time delays as far as possible. Of course the ship would have to undergo all the mandatory sea trials before being accepted.

Having commanded a Soviet built destroyer earlier, I can assertively state that Russian built ships are robust, easy to maintain, and dependable. The quality of Soviet shipbuilding technology is borne out by the fact that the Rajput Class destroyers acquired from the Soviet Union commencing from 1980 continue to be frontline warships of the Indian Navy, albeit with an upgrade of the sensors and weapon package. The current generation of Russian warships have contemporary electronics, weapons and sensors. 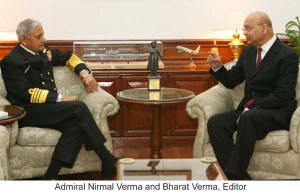 The future dimension of Indo-Russian naval cooperation is slated to grow in the years to come. At the governmental level, an inter-governmental commission on military technical cooperation is co-chaired by the two defence ministers. Three Talwar class follow-on ships are currently being built in a Russian shipyard for the IN. These ships, to be named INS Teg, Tarkash, and Trikhand, are in advanced stages of construction and are expected to be inducted between 2011 and 2012.

Today, cooperation is not limited to a buyer-seller relationship but includes joint development of futuristic capabilities. The INDRA series of bilateral exercises with Russia have seen a steady growth in the level of content and complexity of the exercises. The Russian Navy has exercised with the Indian Navy in our waters and we reciprocated by sending Indian naval ships to Vladivostok for INDRA 07 in Apr 2007.

As regards comparison with the “West”, I would say the equipment we wish to buy from anyone, including our own indigenous providers, needs to be in line with our requirements. We would like to have the “best”, be it from the “East or West”. May I add here that the Indian Navy, in the terms of indigenisation has always wanted it to be, “… But Home is Best!”. All agencies involved in indigenisation, public, private and R&D have to keep exerting themselves to provide the Service with the instruments they need.