What has worked in the case of America? Until recently, it was the new boy in town, and today, the most powerful. Where does the Indian canker lie? Where has the Indian democracy failed vis-à-vis the American? The American nationalist pride and spirit of adventure as a people, is unmistakable. Indians too have shown national spirit, in the event of external threats but in their general attitude to self-discipline, patriotism and enterprise much remains to be desired. Is it that the prevailing unhealthy drift is slowing down the process of revival of India’s intrinsic national mores?

The sole trustee of the national spirit or national character is the individual himself. Unless each citizen is fired to place the larger interest above his own, and takes life as an opportunity to evolve and contribute, the national complexion will remain dim. Being a subjective development, none can help the other directly – each has to take charge of self, which presupposes the growth of national consciousness in citizens, both in act and thought, thereby fostering and cherishing the national culture. The objective is to develop a socio-cultural environment, where each citizen acts as a watchful sentinel of national security, ever alert, to see through and immediately report any snags observed, to appropriate authority, and spares no sweat to contribute to the nation’s advancement through dedicated service in the chosen field of his or her vocation, .

The soul of nationalism for unity must manifest, inter alia, in the realms of an effective law of the land, security consciousness, all-encompassing advancement through appropriately structured education and awareness, which fosters Indianness. We, as people, have to travel a long way to develop a national climate of Indianness, where in working, teaching, social or political gatherings, we do not find people grouping up only in ethnic or regional groups.

The law of the land should uphold national interest as supreme Dharma (duty) of every citizen that brooks no other consideration, which compromises the state’s interest, even remotely. In this regard, a uniform law hardly can be overstressed, in the matters of security, education, fundamental rights, and for demographic balance. The only distinctive personal choice or freedom one can have is in practising own forms of worship and rituals on birth, marriage and death. The law does not have to be draconian, nor should it seem unequal in safeguarding freedom and aspirations of each section of the society. Wherever there is doubt in interpretation of the law, the benefit must go to the state.

For law to be equitable and speedily enforceable, it has to be unambiguous, foreclosing an interpretation detrimental to national security. Obviously, all legitimate apprehensions, and fundamental rights of an individual’s faith and freedom should be taken into account, as long as these do not impinge upon national health and security.

A soldier is organised, trained and motivated, to give his all, for the larger cause. Whenever there is a call, he simply puts behind whatever his personal engagement is, and immediately embarks upon serving the urgent duty. In fact, a soldier is always mentally conditioned to surrender his self to the organisational cause at a moment’s notice. In other words, what sets the man instantly in motion for taking on the summons of duty is his soldierly spirit, which simply put, is his unreserved choice of the larger organisational and national cause over his own. The soldierly spirit is not something self-moving or confined to a group – each citizen is privileged to be fired by it, whatever is his or her field of activity. A soldier may have served for years in his profession, and yet be devoid of this naturally grown spirit. On the other hand, a strong nationalist or soldierly spirit may instantly fire his civilian counterpart.

The famous words of Johnson (1778), “Every man thinks meanly of himself for not having been a soldier” is a true endorsement of the ennobling spirit which guides a soldier in life and death. To develop the ‘Nation First Spirit’ or ‘Soldier Spirit’, each citizen has to imbibe, for all his or her thoughts and actions, a sort of self-actuating slogan like ‘Merey haath Desh ki shaan aur Jaan’ (In my hands, lie the nation’s sovereignty and honour). This motto ultimately generates the will power to overcome pulls of ‘self’’ coming in the way of one’s discharge of duty to the utmost; whether standing as a sentry on the frontiers, or teaching in a classroom, or engineering on a project site, or tilling his land, or engaged in any other sphere of work.

The usual regret of some that the spirit of idealism and essential character qualities, like integrity, courage and sacrifice – so evident among the older generations – are on the decline, is a futile exercise unless a serious thought is given alongside to the restorative measures. It is important to note that these are inherent human character qualities, which will be there as long as humans live. Perhaps, our ancestors had the promising environment to help develop and display their distinctive traits of valour, uprightness, self-denial and so on. The state and society today owe it to the national health and its march ahead, to recognize and adequately protect the whistleblowers and other courageous men and women, whose undaunted display of the laudable character virtues join to make the nation strong.

There is an Indian maxim, which could help us discriminate between right and wrong, between fair and unfair. “If the crisis is of espousing one, at the cost of renouncing the other, then give up the lower for the higher, the lesser for the greater.” Further, it urges, “When the conflict is between self and family interests, sacrifice the self and uphold the family; between family and village, shore up the village; and in like manner, uphold the national interest above all.” In other words, the nation’s interest is supreme and must override all others, both in our thoughts and actions, which indeed is the essence of the spirit of a soldier.

It is heartening to notice the gradually growing public consciousness, and the upsurge in patriotic spirit amongst various sections of society, to brave and stand united against national threats. The upbeat nationalist mood and resolve, to defeat any future challenges, bodes well as the developing republic. The Indian buoyancy, particularly noticeable since the 1990s, is rooted in the rather unannounced signs of its surging economy, gaining world recognition for its vast potential, markedly in the fields of information, nuclear and space technology. Moreover, not to forget, the politico-military upshot it received in the world reckoning, as an emerging power after the 1999 Kargil conflict.

It will be pertinent to recall the characteristic universal goal for each nation, as envisaged by Vivekananda, “Every country has a purpose, and national goal. It survives until it achieves that goal. Once that is achieved, the country, the race perishes. That happened with the Greek and Roman empires. However, India’s national goal is different from that of other countries. It is not just about power struggle or wealth amassment. Our path, our vision has been laid down long back by our Rishis. It is to take us further, to achieve the highest in the spiritual field. It is not only to reach the highest yourself but also to lead others towards this noble goal; so long as India sticks to its national goal, it will survive.”5 Since each citizen symbolises the nation, as long as his or her individual goal is in consonance with the larger national goal, India has a great future of eternal glory.

It has been a long exciting quest, trying to picture the Indian military thought down the ages, through the prism of scrutiny of the available material, coalesced with own experience and glimmerings from the past. A great learning affair for me, the scope of which kept expanding as it progressed. The initial work, aimed at study of the post-Independence wars, got enlarged to include, during the Kargil War, an exclusive analysis of ‘What Motivates Men in Combat’, which got further widened to look into the intrinsic Indian military mind and its vicissitudes through the corridors of time. The last chapter on ‘Future Perspectives’ was added later, to complete the cycle of time – past, present and future.

In this endeavour, spanning over twelve years, poring over its manuscript pages, many a time I wondered if I had written these. In an introspective research work, one seldom reaches the point of satisfaction – the proverbial question marks, ‘so what’ and ‘what next’ invariably haunt one at every stage of the script. Even at this stage, having spent my time perusing the relevant classics and other material on the focused study, caught in the mindset of a quest for greater amount of details, there seems no end to wishing for more and more time. Throughout the endeavour, I drew strength from the spirit of the Sanskrit saying, “There may be somewhere, at some time, somebody who would agree with my views and appreciate them, for time is eternal and the world is wide and large.”6 Happily, the well-spent time, with God’s grace, has enabled me almost to reach the destination that I had set for the instant endeavour. An attempt has been made, in the preceding pages, to share my thoughts and the relevant finds on the subject. If the seeking has been able to set about some more minds to further deliberate and study, the aim is achieved.

In a subject of this nature, which has yet to be fully discovered and articulated in a comprehensive manner, one cannot find references or answers in black and white to every question that crops up. Often one has to turn to speculation and serious mulling over. Some complex issues might take days of deep contemplation but given the earnest look into, the point in question invariably clears up. 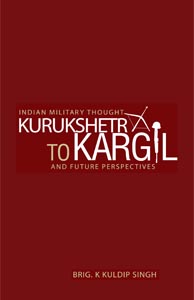 An inquiry into a subject of such vast and varied dimension is bound to evoke as many viewpoints as the reflecting minds. That is precisely what sets one apart from the other. Nor can there be an absolute answer or explanation of the critical larger issues. True to own conviction, and understanding of the available study material, from a soldier’s point of view, I have attempted to put across a perspective, on what I perceived was India’s ancient martial heritage, how it coursed through the tumultuous Medieval Age, a critique of the contemporary showing, and what the future holds for us.

In the process, certain fresh grounds have been broken, by calling into question a number of myths about the Indian military mind, as also taking a fresh look at some conventional beliefs and practices, having acquired national acceptance after Independence. It is imperative for a forward-looking society to recast its approach and strategy, in the face of the dynamics of changing national and international environment and threats. The fluctuating regional situations notwithstanding, India must display faith in its inherent potential and unflagging commitment to safeguard assertively its abiding strategic interests. India is once again on way to its Golden Age, and no lack of national will or public ineptitude can be allowed to impede the fulfilment of its legitimate aspirations.