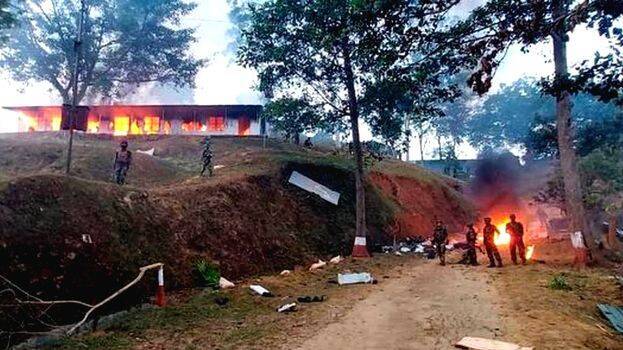 The media is agog with the recent incident of killings in Nagaland. The Union Home Minister has made a statement in Parliament, highlights of which include the following:

According to media reports, the FIR alleges that 21 PARA (SF) “blankly opened fire” resulting in the killing of many Oting villagers and also that the “intention” of security forces was to “murder and injure civilians”.

Nagaland Chief Minister Neiphiu Rio has condemned the unfortunate incident that led to the killing of civilians and tweeted: “Condolences to the bereaved families & speedy recovery of those injured. High-level SIT will investigate and justice delivered as per the law of the land.”

Rovilatuo Mor, IAS, Commissioner, Nagaland and T John Longkurmer, IPS, DG Police Nagaland, in a signed joint statement on December 5, accused 21 PARA (SF) of killing unarmed civilians at random without any attempt for identification. They further say when villagers (number not mentioned) came to the spot, the Special Forces personnel again opened indiscriminate firing killing seven more villagers before fleeing from the scene and that two of the seriously injured civilians were taken to Assam side by the Security forces themselves and are admitted in the ICU at Dibrugarh Hospital.

The statement also says that on December 5, 600-700 people armed with sticks, pipes, flammable fluids and few with machetes or daos (dahs) went to the Assam Rifles camp. After almost an hour into the melee, the second round of continuous firing by the Assam Rifles resulted in one civilian killed and six wounded.

The FIR against 21 PARA (SF) alleging opening firing blankly and intention of murdering and injuring civilians would have had concurrence of the DG Police, T John Longkurmer, for reasons not too difficult to understand.

Media and some journalists are busy spinning the narrative. One journalist writes that forces were under pressure to show some results after the Manipur ambush on November 13 where the CO of an Assam Rifles battalion, his wife, 6-year old son and three soldiers were killed in an ambush by insurgents; suggesting that the action in Nagaland was a reprisal without credible reason. Another newspaper says that the civilians moving in the vehicle were singing loudly – is it suggesting that the reason the driver did not stop the vehicle? But surely, the driver was given the signal by a soldier on the road?

The Commissioner and DG Police Nagaland while accusing 21 PARA (SF) of killing civilians at random without establishing their identity and later opened firing indiscriminately when villagers came the spot need to answer the following:

It may be recalled that a few years back there was an incident in J&K where five youth travelling in a civil vehicle were fired upon when their vehicle jumped two check posts and tried to flee. The youth died in the firing. There was political uproar and human rights groups were up in arms. The check post guard of one JCO and six other ranks were on bonafide military duty in an area declared “Disturbed”. But because of political pressure they were subjected to Summary Court Martial. It was election time then and same is the time now though not in Nagaland.

Initially six civilians had died in Nagaland. More casualties would not have happened if the armed villagers had not attacked the soldiers. At the same time, there is no question of soldiers having a license to kill civilians but the circumstances too need to be taken into account. The Army has set up a court of inquiry under a Major General to look into the killing of civilians in Nagaland. Without doubt justice will be delivered as mandated by law.

As for the politicians, the Commissioner and DG Police of Nagaland, they may want counter-insurgency operations to slow down that helps smooth flow of narcotics and consolidating political power in concert with insurgents. But equate the Indian Army functioning to that of the Pakistani army in Balochistan is sacrilege. Special Forces are the finest of the forces and 21 PARA (SF) has earned a singular name in counter insurgency operations in the northeast, including national recognition for hitting insurgent camps inside Myanmar during 2015 under Operation ‘Hot Pursuit’.