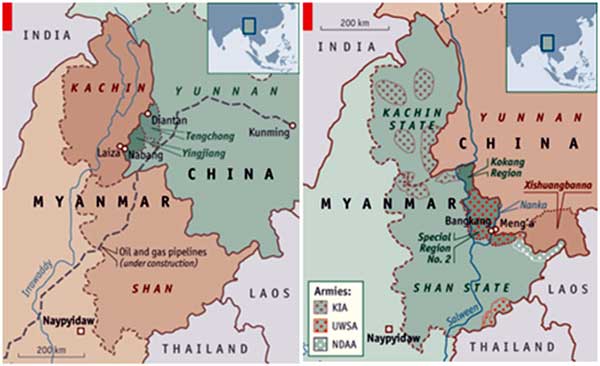 There has been a repeated emphasis on enhancing cooperation and trust between India and Myanmar as no “Look East Policy” (LEP) or “Act East Policy” (AEP) can be copiously achieved in its absence. The geophysical symmetry of Myanmar in the south-east Asian region makes it play an inextricable role with its two peripheral giants, induced by similitude in their ethnicity, culture, history, and economy- respectively oscillating.

In the past, India was caught between an idealistic yet realistic relation with Myanmar, where it supported pro-democracy movement, yet dealt with the military junta. Though, now with the paving in of new democratic regime in Myanmar, India has new opportunities knocking on its north-eastern door. With Aung San Suu Kyi’s NLD coming in power, the foreign attention in the country has increased – be it from the west or India. Myanmar now deduces that rebalancing its foreign relations is important to counters heavy dependency on China – economically, politically, and militarily for progression of its future developmental trajectory. [1] Though, this concern does not hinder its customary ties with Beijing.

The Indo-Myanmar relations have repercussion on both – external as well as internal dimensions of India’s security challenges. Internally it’s the development of north-eastern states, and externally it’s the indirect security concerns raised by China’s penetration in the country.

The ontogeny of India-Myanmar relations is heavily dependent on the peaceful development of northeast India, which is trapped in a series of issues hindering the growth of the region. Some of the lamenting security concerns are the non-demarcation of roughly 10 percent of the India-Myanmar border, the unresolved border consists of 9 pillars in the state of Manipur forming porous areas thus, making policing and manning by Assam Rifles difficult in the region. [2] Adding to that – The Free Movement Permit regime, extending up to sixteen kilometres across the border. A provision misused by insurgents frequently to cross the demarcated area for arms training and establishing safe sanctuaries. Plus, the Golden Triangle-Laos, Thailand, and Myanmar- form a drug producing and smuggling region, generating threats to the entire world but especially to India as its border is exposed to Myanmar – considered to be one of the world’s most notorious exporters of narcotics.[3] Insurgents take advantage of porous borders and grapple upon smuggling of opium and heroin to earn lucrative and easy money.

Thus, smart monitoring of rebel insurgent groups is essential to ensure security. Along with that, infrastructural facilities (communication devices, banking facilities, warehouse and quarantine facilities) also need to improve at the two designated border checkpoints – Moreh and Zokhawatar.[4] It can be achieved, in most probability if the Indian government synchronizing strategies with Myanmar for cross-border stability through constructing a bridge in accordance to LEP and AEP.

While the external dynamics involves explicit penetration of Chinas’ infrastructure in Myanmar for economic benefits, and strengthening of its strategic virile in the region, it coerces India to draw security vexes. In the past, India has severely alleged Myanmar of backing security threatening projects by China in their territory, to a name a few; the Signals intelligence (SIGINT) listening stations in the Andaman Sea at Manaung, Hainggyi, Zadetkyi and the Coco Islands, along with technicians and instructors working at radar installations in naval bases near Yangon, Moulmein and Mergui. [4] Regardless of the legitimacy of their prior projects, Chinese infrastructure exists in Myanmar presently; the oil and gas pipeline altering its ‘Malacca dilemma’, the Kyaukpyu deep seaport in the Bay of Bengal for which recently the construction contract was given to a Chinese company – CITIC Group, the Kunming-Kyaukphyu international railway program, the Letpadaung copper mining project, the Kyaukphyu Special Economic Zone (SEZ) in Rakhine State, development and opening-up of Experimental Zones and Ruili Key Development. Furthermore, China also assisted Myanmar navy in building a naval base near the Kaladan River Multi-modal transport system (near Sittwe port), which is constructed by India. [5]

These projects are deep in the Myanmar territory bringing China closer to India’s eastern flank and if culminated with China’s stake in other neighbouring countries, it seems to engulf India, creating high-security threats.

Contemporaneous and the Succeeding Association Approaches

There are two discernible alternatives available for India to restore its proficiency in the country and those are – either to create its own space of soft power or partake a wishful sophistry of countering the Asian giant – China in the country. For India, there is no easy way out to embark upon the development of its north-eastern corridor, except for advancing its LEP and AEP. While geographical limitations constraint Myanmar to play a pivotal role in these policies, India needs to formulate a long-term strategy to maximize – investment into, and security from – Myanmar.

Besides, what plays in India’s favour is the reckoned supercilious behaviour of China and its intentions been questioned by Myanmar. However, that doesn’t imply it can let go of its giant neighbour merely on some disgruntled issues. China also believes in the same thus continues to invest in the country, even post several infrastructural investment setbacks. These setbacks and apprehensive intentions have been identified by Myanmarese time again, which they have strictly shunned, especially in the case of Myitsone hydro-electric dam project, where the government lashed upon China over concerns of negative environmental and social impacts. Contrary to China, India had backed out from the Tamanthi and Shwezaye dam project for the same reason, representing a pro-democracy and pro-human rights approach.

To further asseverate its positive influence in Myanmar, India has already initiated certain projects to increase it’s maritime as well as land connectivity with the country. Some of these crucial initiatives are the Kaladan Multi-Modal Transit Transport Project – it will be a multi-modal mode of transference for consignments of cargo, connecting Myanmar to the eastern ports of India as well as to the north-eastern part of the country. U, Also, under the  Bangladesh-China-India-Myanmar Economic Corridor (BCIMEC), an initiative reconnecting India with the 1947 waterways to Bangladesh and further linking it to Myanmar, it is anticipated that  Manipur and Barak valley of Assam would be key beneficiaries .

Currently, there are several ideas to link India, particularly it’s North East with; South East and East Asia via Myanmar. Some of the projects in the pipeline are Mekong-India Economic Corridor,Road to Mandalay – a highway project connecting Imphal to Mandalay (Trilateral Highway), and Moreh-New Delhi-Hanoi rail link, which are further expected to formulate into a special Economic Zone.

Simultaneously India is also progressing towards maritime connectivity by investing in projects such as the Kaladan Multi-modal Transit Transport Model connecting North East with Sitwee port in Myanmar. Development of a SEZ system at Sitwee and Champai (in Mizoram) is also proposed. [6]

India’s dual concerns with Myanmar have a singular trajectory to counter it, and that is to invest in the countries growing sub-economy. India needs to identify its niche in Burma’s developmental and economic requirements, thus explore resources on both sides, which are not under the prime investment spectrum of its rivals, such as; agro-food processing, horticulture sector, utilisation of abundantly available bamboo, paper manufacturing units, better production of aromatic and medicinal plants, pressing forward of educational institutes, etc.

The slowdown in China’s growth is negatively impacting Myanmar, rendering trade channel to be added into India’s list of opportunities.[7] Correspondingly the paving in of democratic government in Myanmar is expected to tilt the benefits of (under revision) liberalised – Foreign Investment Law (FIL), earlier constrained due to the State-owned Economic Enterprise Law (SOEE Law). Previously it restricted private sector partnership (foreign or domestic), without government approval in economic sectors  telecommunication services, banking and insurance, exploration, extraction and sale of natural gas and petroleum.[8] The revision will attract foreign companies by providing tax exemption and no-tariff on raw materials, which can help widen the-accountable trade bracket between India and Myanmar, welcoming investments for further develop the SEZ.

These expected revisions and planning’s if attained, have high potentials of letting economic and trade growth between India-Myanmar, helping achieve AEP and creating its parallel hegemony.

India-Myanmar relations are progressing as the Indian government is positively channelizing its AEP, and adding onto that is the change of constraints in Naypyidaw. While, there is a need to bifurcate from conventional reasons of angst and focus on enhancing its own presence. There is more to gain from Myanmar than to offer, nonetheless, India can provide the stability required by this new wave democracy in the country.

The current-12th Five-Year Plan intends to focus on improving connectivity of North East coupled with an emphasis on developing linkages with neighbouring countries. Since ASEAN has redeemed its importance in India with the renewal of LEP to AEP, Myanmar becomes the clear pivot of future probabilities. Thus, the issues mentioned above gain importance but predominantly India needs to focus on its own area of might and develop its niche power in Myanmar. To achieve the same there is a requirement to understand the power and potential of India, which in most probability might not be at par with China, nonetheless progressive advancements are bound to take place with revision of polices. If the Indian government can’t thrust on China’s supremacy, than it shall focus on creating its parallel hegemony in Myanmar and bypass Chinese presence.