Home  >  Spotlights  > Geopolitics  >  Myanmar: China on “Overdrive” to solve the Ethnic Question: Why?

Myanmar: China on “Overdrive” to solve the Ethnic Question: Why? 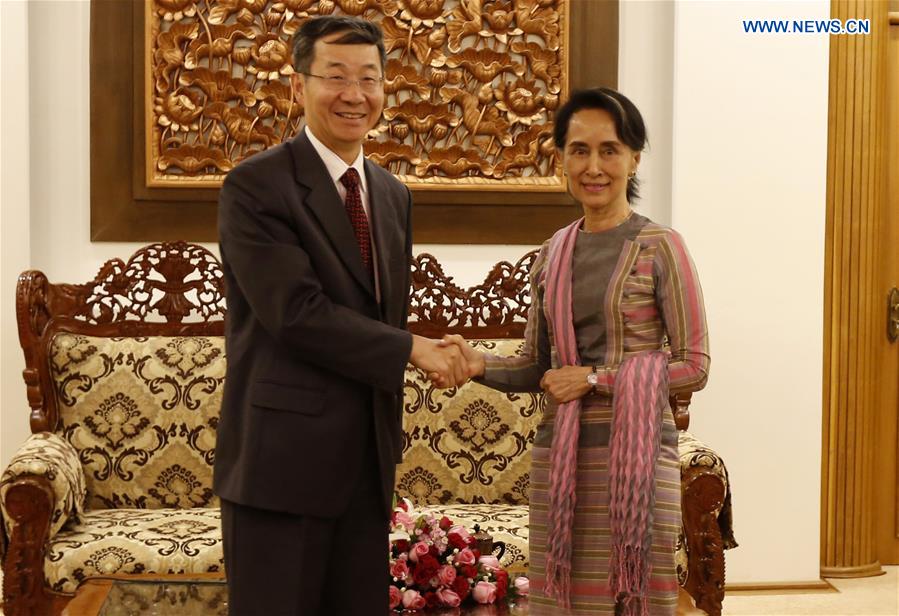 From the flurry of activities of Sun Guoxiang, Special Envoy for Asian Affairs and the Chinese Ambassador at Yangon, it looks hat Chinese are in a desperate hurry to solve the question of the ethnic minorities and their armed organisations operating in the Kachin and the Shan areas on the Chinese border.

It is not that the China that  has armed, encouraged and supported the ethnic armed organisations since Myanmar’s independence have suddenly realized that peace is essential for Myanmar.  Their strategy had all along been to keep the ‘pot boiling’ to have leverage over Myanmar.

What has changed the strategic course of China is the implementation of the Belt and Road initiative where 6 of the 24 projects under the Belt Road are due to be initiated in 2019 for which the cooperation of Myanmar Government is essential.  These include the 1700 Km road from Yunnan to Mandalay and then on to Yangon and their flagship project the Kyaukphyu Port and SEZ project, upgradation of three major roads in Kachin and Shan areas besides others.

For running these projects, the Chinese would need power too and besides starting smaller hydro power projects in the Kachin area, it looks that they are keen to revive the Myitsone project  in Kachin area, stopped earlier and may succeed before the end of the year!

The Chinese have correctly judged that Myanmar has no-where to go and will be totally dependent on her in the international fora and even from threats of sanctions of some Western countries.  The time is ripe therefore for China to “strike” and it is not going to let go this golden opportunity.

The Western Countries and the International agencies are equally responsible for throwing  Myanmar into the lap of China.  See for example the statement of the UN Special Rapporteur on human rights in Myanmar last week during her tour of south east Asian countries.  She said that the Myanmar Government had failed to carry out democratic reforms halfway through its term.  She added that ‘democratic freedoms are ever fragile’.  She had certainly gone beyond her brief in not restricting herself to violation of human rights alone.  The Myanmar Government  rightly announced that it will not cooperate with her as she lacked objectivity and had violated the code of conduct.

The unilateral cease-fire for four months declared by the Tatmadaw on 21st December 2018 against the Northern Alliance minus the Arakan Army was certainly due to pressure from the Chinese.

The Chinese Ambassador visited the Kachin area on December 28 and 29 and warned them not to make friendships with Western Diplomats.  He asked them not to oppose the Chinese projects including the controversial Myitsone Hydro Power Project.  This meeting came soon after the visit of diplomats of UK and USA to the Kachin region the previous week.

The Kachin political leadership invited the Chinese ambassador to open a ‘liaison’ office in Myitkyina, the official headquarters of Kachin State!

Besides the 3.6 Billion Myitsone project which is under suspension, the Chinese have begun construction of five large dams in the Irrawady basin and  a special economic zone in Myitkyina.  In a 2017 poll, it was seen that 85 percent of people in Myanmar were opposed to the construction of the Myitsone dam , but yet the Chinese would surely find a way to resume the project.

In the second week of January, the Chinese Embassy in Yangon said in a statement that the “local people of Kachin State do not oppose the Myitsone Hydro power Project.  It is that some individuals and social organisations from outside that oppose the project.”  Most of the political parties and the social organisations opposed this  statement.  The Chairman of the Kachin Democratic Party said that “Our party cannot accept the dam.  The Kachin people do not agree with the project ad our parties cannot allow it.”  Yet the Chinese who have no environmental  considerations or of the people’s views would still press ahead with the dam!

On the 11th of January 2019 the Chinese Envoy Sun Guoxiang visited the KIO at their headquarters in Laiza to meet the leaders of the Northern Alliance.  Imagine that in sovereign country like Myanmar, hundreds of KIA soldiers welcomed Sun with flags of both China and that of KIO along the streets.  The Chinese Representative asked the KIO to show tolerance  and remain open for peace talks.  The KIO Chairman N’Ban Hla was present in the meeting.

A delegation from China led by Sun Guoxiang visited Yangon on 25th January 2019 to meet the Peace Commission  Chairman Dr. Myo Win and discuss about the peace process, Myanmar’s stability and regional development.

Earlier the Chief of Myanmar Army Gen. Min Aung Hlaing received Sun at Nay Pyi Taw.  Both discussed on China’s assistance and cooperation in Myanmar’s Peace process.  It is said that in the meeting Sun strongly criticized the attacks of Arakan Army on the border posts in Rakhine State earlier which triggered a general offensive by the Army in the Rakhine State.   Since it occurred on the Indian border, the Chinese have no sympathy for the Arakan Army whose operations do not affect the Chinese border!

A conflict that is almost seven decades old cannot be solved by a few meetings.  Both sides- the Army and the Ethnic Armed Insurgents do not seem to feel the urgency to look for peace and mutual accommodation.  It is more than  a month since the ceasefire was announced and only now are the sides nominating the teams to negotiate for talks.  The negotiating team for the Tatmadaw is being led by Lt. Gen. Yar Paye.

The Army has also not helped in beginning the talks in a positive way.  Even before the talks are to begin, it warned the Armed organisations not to expand the respective operational areas and claimed that the EAOs are destabilizing the region by fighting with each other and with the Tatmadaw troops and has given a dead line.

Separately the Army announced that the cease fire is not being respected by the Armed Insurgents and claimed that they (EAOs) had operated 168 times outside their jurisdiction, extorting money from civilians ten times, recruiting cadres twenty times, and ambushing the Army ten times besides laying mines in two instances.  This is not a good beginning for any chance of success in the ensuing talks.

Sensing that the Ethnic reconciliation may get stuck, the NLD is said to be changing its priorities.  Media reports indicate that they may formally propose constitutional amendments to the 2008 Constitution.  The NLD had always maintained that the Constitution is undemocratic, but any amendment cannot be made without the consent of the Army who hold 25 percent of the seats in the Parliament.

There are no signs that the Army would relent!