Mother of All Bombs: A New Age Weapon of Mass Destruction? 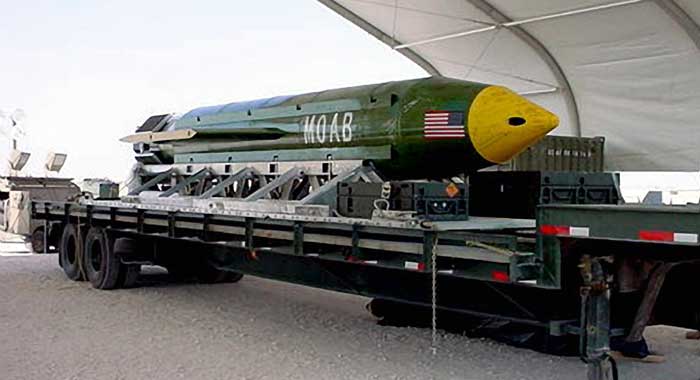 The term Weapon of Mass Destruction (WMD) was probably used in the print media for the first time following the uproar over Germany’s aerial bombardment of the Basque city of Guernica in April 1937.1 Only a year before, Italy had used mustard and other Chemical Warfare (CW) agents in a region of modern-day Ethiopia. Broadly, the idea behind the use of the term WMD was to depict the heinous form of killing many innocent civilians. Such weapons could be aerial platforms called aircraft to undertake carpet bombing or usage of deadly chemical substances. After the use of nuclear weapons during the Second World War, these weapons too got added to the list of WMDs. Subsequently, the list became complete with the inclusion of biological weapons. In 1956, the then Soviet minister for defence argued that modern warfare would be dominated by WMDs, which include massive use of air forces and rocket forces as well as chemical, nuclear and biological weapons.2

On Thursday, April 13, 2017, the US Airforce dropped the largest non-nuclear bomb ever used in combat over eastern Afghanistan. Known as GBU-43/B Massive Ordnance Air Blast bomb (MOAB, commonly referred to as the “Mother of All Bombs”) and costing around USD 16 million, this 21,000 pound (9525 kg) bomb was dropped from an MC-130 aircraft with the aid of a parachute and using a satellite based guidance mechanism. The bomb exploded some six feet above the ground and had a blast radius of 1.6 km. According to the post-attack damage assessment, around 100 militants belonging to the terror group ISIS were killed and significant damage to the over ground and underground infrastructure took place (such bombs can break through around 200 feet of reinforced concrete).

Why did the US choose to drop this bomb now when it has had it in its arsenal since 2003? And, why was Afghanistan chosen as a target? Is Nangarhar province where the bomb was dropped modern-day Guernica? The answer could be both yes and no. Unlike at Guernica where there was a need to test the efficacy of aerial bombardment, no such need existed in the case of MOAB. It was tested in 2003 by its developers and it is known that a roughly 10,000 kg bomb provides a yield of 10 to 11 tons of TNT.3 (It may be noted that the Nagasaki nuclear bomb had a yield of 20 kilotons (TNT equivalent) and the one used on Hiroshima 15 kilotons.) Hence, more than a need to test, the US was probably keen to engage in global signalling especially towards North Korea. The idea appears to have been to highlight that the US has non-nuclear options available, which are almost as dreadful, and will not hesitate to use them. With regard to the situation on the ground in Afghanistan, there is definitely a requirement for tough action against ISIS. However, the choice of a heavy weapon like MOAB has provoked debate.

Today, the US needs to address multiple threats globally. Syria, Libya, Iraq and Afghanistan are not giving US policy-makers and its military any respite. North Korea appears to be challenging US supremacy. In addition, there are strategic challenges from Russia, China and Iran. For years now, disarmament and arms control have been focus areas in the US defence and foreign policy agenda. The US political leadership has been arguing that WMDs pose the greatest threat to Americans as well as to humanity at large. They have ensured that global politics revolves around this issue and have effectively, and selectively, used the issue of WMDs to suit their requirement. For example, hundreds getting killed in Syria in conventional warfighting gets overlooked, but when deaths occur due to use of chemical weapons the US government undertakes an offensive response. Essentially, the use or intention to use of WMDs amounts to crossing a red line. This, however, does not apply to massive caused by conventional weapons.

The Trump administration appears to be attempting to handle the existing strategic challenges a bit differently than its predecessors. Its response to the use of chemical weapons in Syria appears to be more along the lines of shock and awe. If the use of chemical weapons was the issue, then it is difficult to understand why only the assets of the Syrian air force on ground were targeted. Probably, it appears that the disproportionate force (59 Tomahawk missiles) was required owing to the accuracy aspects of the missiles. If there had existed some stock of chemical weapons in the area targeted (no information to that effect is available) then the use of such missiles would have proved counterproductive. Destroying Chemical and Biological Weapons without dispersing their deadly contents is a difficult task. Using conventional weapons like Tomahawk missiles could actually help spread chemicals. Instead, the Trump administration should have used the Agent Defeat Weapon or the Agent Defeat Warhead (ADW4), which is designed to disable a WMD storage or production site. The US is known to possess this unique weapon, possibly since 2003.

With regard to Afghanistan, it is difficult to comprehend that just one big bomb is a solution to the challenge posed by ISIS. Given the advertisement surrounding the use of MOAB, it is possible that the Trump administration is signalling to its adversaries the very lethal weapons in its arsenal and its willingness to use them. Would the use of MOAB set off a new arms race’? It would be premature to jump to any such conclusion. However, it is important to note that MOAB is not the biggest non-nuclear bomb. A decade ago, Russia had tested what is known as the Father of All Bombs (FOAB) on September 11, 2007. FOAB was four times more powerful than MOAB.

In addition to these bombs, there are a few other weapons available with the major powers like directed energy weapons, e-bombs and cyber weapons. The use of MOAB raises many questions rather than providing solutions to present challenges. If this is an off-the-cuff reaction by the US administration, then the issue would die down soon. However, if the US feels that Syria and North Korea are challenging WMD deterrence, then the use of MOAB could even be a ploy to test the waters. The US understands that the Non-Proliferation Treaty (NPT) stands extended in perpetuity but that does not mean that nuclear deterrence is. Is it then trying to change the grammar of existing WMD deterrence and proposing to redefine modern day WMDs?

1.The mass killing of humans/animals and massive destruction this bombing campaign caused was depicted by Picasso in a mural called Guernica, whose replica is placed outside the entrance to the UN Security Council.

3.The explosive yield of TNT is considered the standard measure of the strength of bombs.