Modular design and construction of warships 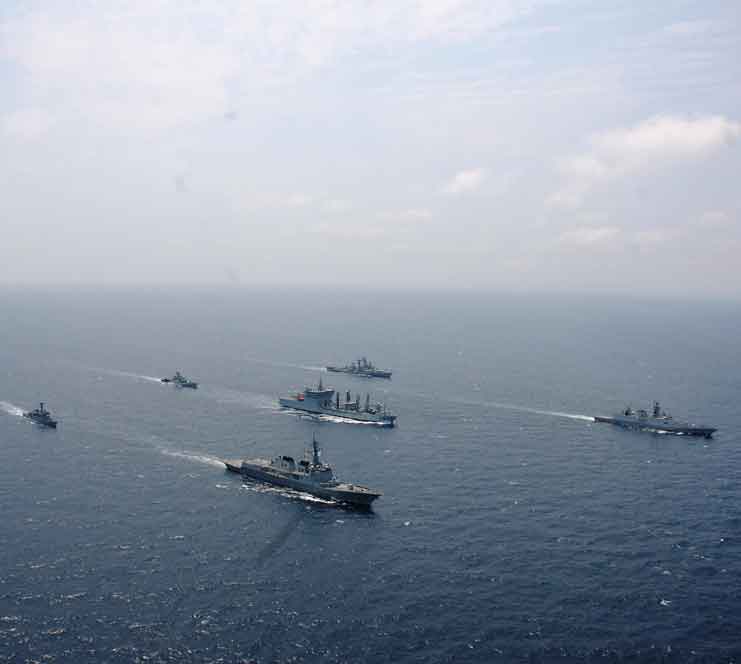 Indian Naval ships with Republic of Korea Ships during Passex

Ships are built in the shortest time when a series of specific pre-planned Modules are assembled like a Lego set. A Module is an engineered assembly of a portion of the ship Platform that contains a set of concentrated hardware and software that drives one or more specific functions of the ship directly or in combination with other Modules. The rapid growth of related sciences during the last two decades makes it practical for stand-alone Modules to be designed and built independently and then assembled to form a complete ship.

Modules and the Blocks that follow are built to very tight and exacting tolerances. They are continuously monitored during construction and assembled to form the Platform at exact positions using laser trackers.

The construction time is least when the Modules in turn are preassembled into Blocks. A Block consists of a set of adjacent linked Modules with all the associated steel work. A principal Module supplier is usually the designate for assembling the Block. Where this is impossible, such assembly must then be done at the Platform site. The size of this Block depends on the handling, storage, assembly arrangements and the proximity of the module suppliers. The assembly of the Platform is fastest when the number of Blocks is small. Examples of typical Modules and Blocks may be seen in Figures 1 to 11 shown herein. 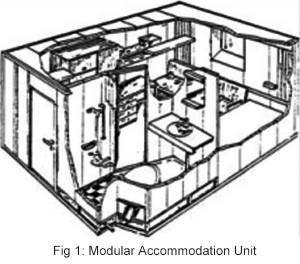 Modules and the Blocks that follow are built to very tight and exacting tolerances. They are continuously monitored during construction and assembled to form the Platform at exact positions using laser trackers. Dimensional accuracy is a key requirement of Modular construction. Because of that, welding distortions need to be controlled and strategies devised to mitigate any distortions and residual stress that will affect the final assembly of the Platform. The library of documented procedures, shell contour allowances and 3-d nodal distortions for each Module/Block at each Builder’s site and the precise environ conditions need to be reviewed as part of the qualifying tests. In the case of sub sea cylinders and spheres, the swing arc frame, theodolite, electro-levels that were used for circularity measurements are now redundant. Circularity measurement rate has been speeded up ten fold and more by using the portable 3-d coordinate measuring portable scanner with its laser mouse on a triangular Platform supported on three ball rollers. It is held against the inspection surface of the cylinder or sphere by magnetic force. It has its own wireless output and is an excellent replacement with far better four digit accuracy. 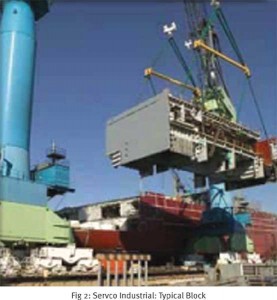 Lots of studs are required on a new Platform for supporting and securing shell/deck mounted equipments and rafts. Using a laser image projector and a data scanner on the vessel’s computer aided design (CAD) base, the locations for the studs on a new hull are automatically spotted thus eliminating thousands of hours wasted in 3-D measurements by hand. The use of mice in shipbuilding has exploded. Earlier we had a twin roller, ball mouse. The infra red mouse killed that and the laser mouse followed soon after. All that happened in seven years. The Naval High Command has consistently highlighted the slow rates of deliveries of warships. Yet, nothing substantial has been done to achieve the desired productivity.

Modular design of a Warship is very different from conventional design. It is more complex because the design algorithm is raised to a much higher level. The problem now condenses to designing and assembling a warship that will meet the Statement of Requirements using the least number of standalone Modules whilst also restricting the overall weight and volume. In conventional design, the reference to Modules and their numbers is of little concern to the designer. Because of this, the number of resultant pre assemblies is far from the optimum and have no accountability. In Modular design, the required redundancies and system fail safe levels need to be decided very early as re-engineering to meet late stage demands is wasteful. 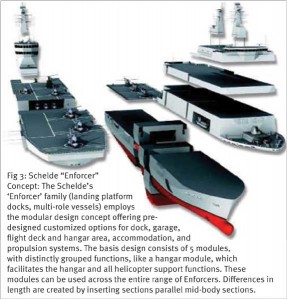 Modular assembly generates the fastest building times. The productivity heavily depends on the design philosophy used to minimize the number of Modules and the associated discipline of the designers. It is also closely related to the size, the independence and integrity of each Module achieved prior to its assembly to create the Platform. The framework of our Shipbuilding and Defense industry, as an entity, was formulated in the last century. During that time, ships were not designed on the basis of strict segregation of functions which process requires them to have their own dedicated space allocations. Instead, functions invariably spilt over to many locations all over the Platform on a “locate as best” principle within the permissible bounds of stability. Further, the industry as a whole had little inbuilt capacity for any innovation and evolution essential for faster deliveries. It vigorously promoted a dependence on outside consultants for such changes and still continues.