For the first time in recent memory, the words “defence budget” did not figure in the Finance Minister’s budget speech in the Lok Sabha on February 29, 2016. The norm has been for Finance Ministers to mention the broad allocations for defence in their speech and thump the table to say that if need be, additional funds will be provided. And, each one of them has gone on to reduce the allocation subsequently so that the revised estimates are invariably much less than the budgetary estimates. As the cuts usually come from the capital budget, military modernisation continues to stagnate. 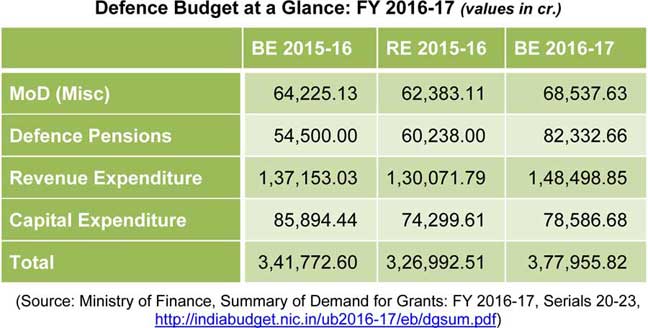 At Rs 3,77,955.82 crore, the budgetary estimates (BE) for FY 2016-17 are 11.5  percent more than the revised estimates (RE) for FY 2015-16. While this looks like a substantive increase, it is mainly on account of the increase in the allocation of pensions due to the implementation of OROP and the increase likely in the pay and allowances of defence personnel on the implementation of the recommendations of the Seventh Pay Commission. Incidentally, it is for the first time that pensions have been included in the defence budget. This will tend to give a false picture of the ratio of the defence budget to the projected GDP.

Despite the government’s best efforts to encourage the acquisition of weapons systems and defence equipment through the “make in India” route, about 70 percent of the requirements are still imported.

Comparative analysis of the defence allocations for successive years must also take into account the constraining factors that impinge on the intrinsic worth of the funds allotted. Though the rate of inflation is relatively low at 5.5 percent per annum, it is still large enough to have an adverse impact on both the revenue and the capital budgets. The approximately 12 percent decline in the value of the Rupee against the US Dollar, from Rs 62 to nearly Rs 70 over the last year.

Despite the government’s best efforts to encourage the acquisition of weapons systems and defence equipment through the “make in India” route, about 70 percent of the requirements are still imported. Also, it is well known that the rate of inflation in defence equipment is about 12 to 15 percent per annum. Hence, there has not only been a reduction in the capital budget from Rs 85,894.44 crore (BE, FY 2015-16) to Rs 78,586.68 crore (BE, FY 2016-17), there has been a serious erosion in the net value of the allocations on the capital account to the tune of about 10 percent. This will further hamper efforts aimed at defence modernisation.

It has been reported that 86 defence deals worth approximately Rs 1,50,000 crore are close to the final stage of approval. It is likely to be difficult for the MoD to find the funds that will be required to sign even half these deals as the bulk of the funds allotted on the capital account will go towards the servicing of ‘committed contractual liabilities’ of previous years.

…the country is confronted with growing external and internal security challenges, reducing the defence budget in real terms may encourage military adversaries to take advantage of inadequacies in defence preparedness.

Year after year a large part of the outlay for defence is surrendered unspent. This reflects both the inability of the bureaucracy and the armed forces to spend the funds allotted fully as well as the proclivity of the Ministry of Finance to allow part of the allotted funds to lapse as a tool to manage the burgeoning fiscal deficit. It is difficult to accept that the proposal made by Mr Jaswant Singh, then finance Minister, in the interim budget for FY 2004-05, to introduce a non-lapsable rolling defence modernisation fund cannot be implemented. He had earmarked Rs 25,000.00 crore towards such a fund, but this innovative measure did not find favour with the Congress-led UPA government that presented the full budget.

The reason trotted out by the bureaucracy is that the ‘rules of business’ do not permit this as all unspent funds compulsorily lapse at midnight on March 31st at the end of the financial year. Incidentally, such a roll-on fund was in vogue during British times. It is worth finding out how much the rules of business have changed since then. And, surely, a Constitutional amendment is not necessary to change the rules of business – it needs nothing more than political will.

According to a recent SIPRI report, India has emerged as the world’s largest importer of arms, accounting for 14 percent of global arms imports. India’s imports were three times greater than those of China and Pakistan during the period 2011-15. At a time when India’s regional security environment is far from stable – Southern Asia is the world’s second most unstable region after West Asia – and the country is confronted with growing external and internal security challenges, reducing the defence budget in real terms may encourage military adversaries to take advantage of inadequacies in defence preparedness.

Besides being a statement of account, national budgets have invariably been utilised as vehicles for policy formulation. The defence budget is an indirect tool for demonstrating the country’s resolve and enhancing deterrence through signalling. A lackadaisical approach to the formulation of the defence budget creates the impression that the management of national security does not rate a very high priority. That is not a good message to send out from the premises of the Indian Parliament.