Mob Mentality: A New Normal in Kashmir that Leaders need to Challenge 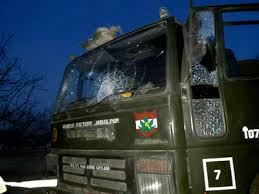 The Shopian incident of 27 January wherein an Army convoy was attacked by nearly 200 stone pelters has set in motion yet another unpalatable sequence of events. The political reaction to the incident has been on predictable lines!

The National Conference position, spearheaded by Omar Abdullah, comprised of a single point agenda of embarrassing the ruling People’s Democratic Party (PDP) and instigating it to act against the Army.

The separatists gave a call for the all pervasive Bandh (lock out strike) and then remained busy in trying to stretch it as long as possible, in concert with their primary aim of disrupting normal life as much as is possible.

The ruling PDP displayed its insecurity by immediately instituting an inquiry and prevailed upon the JK Police to lodge an FIR against the Army, an act that goes beyond prescribed legal mandate. In a macabre display of spinelessness, the party wants to be seen to be walking the extra mile in support of militant activity in order to take the winds out of the sails of the opposition strong salvo.

Apparently the politicians, in their preoccupation to earn brownie points, did not give much thought to getting to the root of the issue. While concentrating on the occurrence and politicising the same they conveniently forgot the trigger and thus created a circumstance where credible corrective action would not be feasible.

The blatantly opportunistic reaction of the Kashmiri political leadership has elicited universal disgust. The unbalanced and one sided approach to the incident adopted by the chief minister in implicating the army has drawn widespread repugnance and antipathy. Her hurried complaint to the Union Defence Minister, followed by lodging of an FIR have been condemned by her own coalition partners within the state, by other political parties, by leading experts and intellectuals and more so by the general public. Social media is choked with posts castigating her decision and coming out wholehearted in support of the soldiers.

The state government is coming under severe criticism for not doing anything to mitigate the trying circumstances under which the security forces are functioning.

The embarrassment of the chief minister has become even more acute with reports now coming in that the officer named in the FIR, Major Aditya Singh, was not at the site of the incident at all. The thoughtless and hurried action of the JK Police is registering an FIR stands fully exposed.

It cannot be denied that the death of the two boys is a big tragedy and it should not have happened but then it is also true that the boys were part of a crowd that was all set to commit murder and that too of soldiers of the nation.

How many instances are there in the civilized democratic world where the people get together their own soldiers? It is definitely not normal behavior and its occurrence should be a matter of grave concern for the elders and leaders of the community. Such concern is nowhere in sight and as a result mob mentality is being established as a new normal for the Kashmiri people.

This important point is not lost to the general public and people are expressing concern, on social media, over the manner in which Kashmir youth are being indoctrinated on to the path of violence by outside forces. It is being generally agreed that though the death of two young boys is unfortunate, jumping over and kicking army vehicles is not reasonable behaviour by any means.

There is a concerted call upon the Hurriyat and the Kashmir leadership to rise above blaming the army and instead discipline the youngsters of the community and teach them the path of peace.

As the region gets over the very sad and avoidable loss of life of two young boys it becomes necessary to do whatever is required to ensure that such incidents do not take place at all.

It is very important to admit that the weakness of the leaders, civil society and elders in Kashmir in checking the younger generation is giving to the inimical forces the leverage to keep instigating young and impressionable minds towards perpetration of grossly unlawful and immoral activity.  While the focus of the inimical forces is to embarrass the government as well as the country, it is the Kashmiri society that is emerging as the biggest loser in the game.

Of course nothing is going to come out of the drama that the politicians have staged in the wake of the unfortunate incident. The soldiers are, fortunately, protected by the Armed Forces Special Power Act. Their action will be subjected to a stringent internal investigation. If any violation of established procedure is established, statutory punishment under law will be meted out. The army is very conscious of its image and it does not need a Mehbooba Mufti or an Omar Abdullah to remind it of what needs to be done to maintain discipline and decorum within the force.

The Kashmir leadership, on its part, would be well advised not to stretch its luck too far. Soldiers are honourable human beings and it is best to deal with them in an honourable manner. A witch hunt and blame game of this nature can have disastrous consequences. Their patience can be stretched only thus far and not beyond.  Instead of firing from the shoulders of the army the so-called leaders should become actual leaders and work towards setting their own house and their own community in order.

One thought on “Mob Mentality: A New Normal in Kashmir that Leaders need to Challenge”