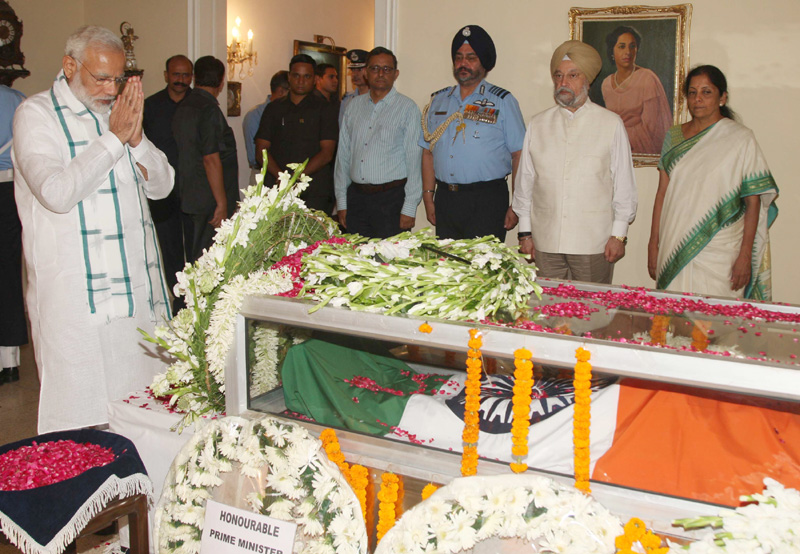 Prime Minister Narendra Modi paying tributes at the mortal remains of Marshal of the Air Force Arjan Singh, in New Delhi on September 17, 2017.

It is appropriate and befitting, given his stature and distinctive profile, that the only Marshal of the Air Force (MAF), Arjan Singh, was accorded a state funeral with the national flag flown at half-mast.

The MAF is the equivalent of a five-star Field Marshal (FM) in the army and India had earlier elevated only two officers to that rank – Sam ‘Bahadur’ Manekshaw and later ‘Kipper’ Cariappa.  Air Chief Marshal Arjan Singh was elevated to Marshal of the Air Force in January 2002.

In an unprecedented but welcome gesture, the President and the Prime Minister led the country in paying tribute to an ‘icon’ – not just of the Indian Air Force, or the Indian military – but for the entire nation.

Born in 1919, the MAF was just two years short of his ‘century’ and while his demise is indeed very sad, he lived a life that will remain an inspiration for a younger generation that can only glean some part of his professional trajectory from military history books and related documentation.

The bare statistics about the MAF’s life are stupendous.  Commissioned in the erstwhile Royal Indian Air Force in December 1939, he began life as a fighter-pilot in the earliest bi-planes of the time and was awarded for high gallantry with a DFC (Distinguished Flying Cross) during the Burma campaign in 1944.

Arjan Singh was appointed the Indian Air Chief in 1964 – when he was only 45 years of age and retired five years later when he was just 50 years old! During this period he led the IAF with aplomb in the 1965 war against Pakistan – and saved the day, as it were for the beleaguered Indian Army – and the nation.  The introduction of air power at a critical point in the war tilted the tactical balance in India’s favour.

The MAF’s recall of his interaction with the political apex of the day – Defence Minister Y B Chavan and Prime Minister  Lal Bahadur Shastri –  provide very useful insights into the texture of civil-military relations 50 years ago.  I will always remain grateful to the Marshal for the generous manner in which he shared his experience and prescription apropos the quality of higher defence management in India. Devoid of any certitude or ‘in my time’ kind of bravado and extravaganza, “Arjan Sir”, to the people of the defence forces, was the quintessential wise warrior-gentleman.

In the period 1939 to 1969, the MAF flew as many as 60 types of aircraft and he also oversaw the transition of the IAF to the modern generation of fighter aircraft. A professional of the highest order, his gentle and courteous demeanour was combined with a quiet but steely kind of leadership that is rare.

Arjan Singh had a very special relationship with his subordinates – the officers and men – and the stories about his kind of bonding and leadership by example is legendary.  Modest to a fault, he was less flamboyant than FM Sam Manekshaw but no less revered by his men.

It is  a matter of  permanent  shame and regret that when  Field Marshal  Manekshaw breathed his last in June 2008, the government of the day was indifferent and even the service chiefs were not present at his final journey. This was deplorable, indefensible and shabby.

Military icons like MAF Arjan Singh and FM Sam Bahadur are few and far between in a nation’s history.  We mourn their passing, even as their life and accomplishments are to be cherished and celebrated.