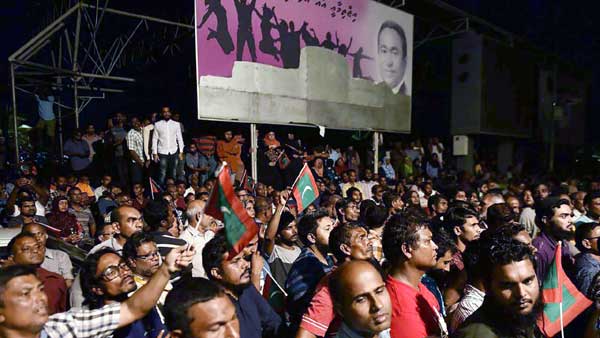 It was in eighties that Male gave India a SOS and within no time Indian military planes were landing in Maldives. The attempted coup was quelled in Maldives and normalcy restored within 48 hours. This time again, about 100 days back an adverse political situation developed in Maldives.

The current president Mr Yameen who took over reins of power, ousting his half brother and then president Nishad by dubious means in 2012, arrested the Chief Justice of Supreme Court of Male on the charges of graft (because he gave a judgement that would have overturned the presidency of Mr Yameen), and enforced 15 days emergency, later extending it to 45 days. A dire situation had developed in Maldives. Ex president Nishad and the current CJI had requested India to intervene, but India did not. However Maldives under president Yameen is now firmly sitting in the lap of China and is continuing to snub India.

It is good that India has not intervened in Maldivian politics despite previous president Nishad requesting India, to do so, because today’s Maldives is very different proposition from 1988. Radicalisation of Maldives is on the upswing. Large number of Maldivian youth had joined the ISIS and have now returned. Maldives today is a democracy. It has a democratically elected government. Whatever crooked means are adopted by the current president Abdulla, it is remains an internal matter of Maldives.

Any external interference by India in the internal political matters of Maldives will not be liked by Maldivians themselves. While India has definite stakes in the country and the current Maldivian Government is more inclined towards China. China uncalled for warning to India to not to interfere in Maldives internal matters also cannot be taken lightly by India.

China’s signing with Maldives the Protocol on Establishment of Joint Ocean Observation Centre on the Western most Atoll in the north (near India) Makunudhoo last year has an application in order to dominate and surround India in its backyard and spy on all the maritime traffic in Indian Ocean. Yes it is separate issue that both China and Maldives are denying this aim of the proposed protocol. Maldives previous president Mr Nishad is saying that China has already acquired 17 atolls from Maldives leased for 50 years apparently for tourism.

What China is doing on them is still not very clear. The matter is very hush hush. As per opposition leaders of Maldivian parties this proposed Joint Observation Centre being built by China in Northernmost Atoll Makunudhoo has both civil and military connotation. This will have submarine base and other military facilities. It is sounding very much like what China is building in South China Sea (SCS) with all the military facilities. There apart from unilaterally declaring to the world, especially America and Western World, that SCS is basically Chinese Back Yard Lake, this proposed Joint Observation Centre which China is now building on Makunudhoo Atoll is akin to one it built in SCS and is very close to Indian Lakshadweep port facilities. Needless to say India should be suitably concerned.

This Agreement with China has been made by the current president Abdulla Yameen of Maldives last year, along with signing of free trade agreement. Abdulla Yameen who is basically a Chinese stooge hell bent on selling Maldives integrity and sovereignty to China for personal gains. Currently he has jailed the Supreme Court judges who have dared to pass adverse judgement against him. Truth is that he is sitting in China camp showing thumbs to India

With an eye firmly on China, India has invested heavily on Male in providing military aid, training and capacity building over last decade. India has also gifted to Maldives a fast attack craft. India has also placed six pilots and a dozen ground personnel to facilitate operation of two top of the line Dhruv helicopters gifted to Maldives. Now Male says that it is not renewing the Letter of Exchange (LoE) for the Indian Advance light helicopter operating from Addu Island in extreme north of the 1190 island archipelago called Maldives. There is news that Male is also considering removal of the other Indian ALH operating from extreme South Lammu Atoll. This is a sensitive location because it is here that China is planning to build a port.

If Maldives does not renew the LoE then both the Indian helicopters and the pilots as also the ground personnel will have to return home. If this is not enough the first foreign dignitary who visited Maldives after the emergency was lifted on 31 March was Pakistani Army Chief General Qamar Bajwa. It is common knowledge that China is using Pakistan as front to isolate India in South Asia.

Let there be no doubt that all these shenanigans of the regime of Yameen Government of Maldives are certain to further strain relations with India. It is also bound to raise questions on India’s defence and security cooperation with Male. We should not forget that China is making deep inroads in this strategically located country with its infrastructure and connectivity projects.

China is hell bent on isolating India in Asia and confining it to South Asia with very limited role to play. Fault lies with us that our political masters were so busy with their petty politics that they forgot that beyond India also world exists. We have allowed China to become five times stronger in its economy and twice in military. Our political masters fail to understand that diplomacy only succeeds if you have military muscle power. That is why America has a 678 billion dollars as its yearly defence budget, China having 175 billion dollars compared to India having just 47.8 billion dollars. One is not saying that we should match with these countries in defence but we must pack a punch that should any of these countries think otherwise they should be assured of great destruction.

We must enhance our naval power to protect our maritime communication routes and oil exploration wells. We must reform our archaically old Higher Defence Management system. As for now we may like to approach America, Britain and other like minded countries to come forward in settling things in Maldives, as they do not have a stake in Maldives and have an excuse that they want to strengthen democracy of Maldives. China is building a port at Southern part of the country at Lammu Atoll. Surely India has a right to ask what this underwater observation centre and this port is all about. It is also now imperative that our political masters realise that India will not be allowed to rest in peace By China, having joined hands with Pakistan. India has no option but to enhance its strategic reach at least in its neighbourhood and Indian Ocean.