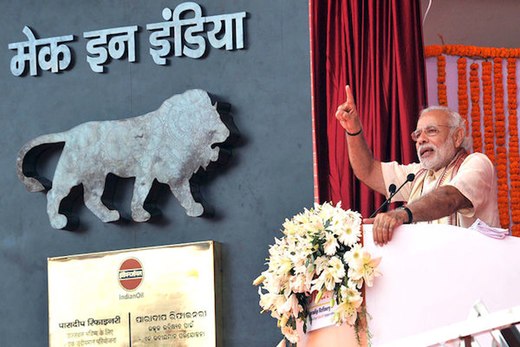 Boeing, Lockheed Martin and SAAB-AB have been looking for Indian partners to manufacture their respective aircraft in this country. This means that Prime Minister Narendra Modi’s “Make in India” initiative is well on track, having crossed the phase of initial diplomatic and bureaucratic glitches. These business propositions follow the government’s decision to relax FDI norms in the defence sector— allowing up to 100 percent investment by foreigners in some cases— and a meeting between Commerce & Industry Minister Nirmala Sitharaman and Lockheed Martin Corp Chairperson, Marillyn A. Hewson.

In the meantime, Tata Advanced Systems Limited has signed an agreement with Bell Helicopter. The Indian business group’s Tata Boeing Aerospace Limited (TBAL) has a deal with Boeing AH-64 to co-produce fuselages of multi-role combat helicopters, Apache. Boeing is also training our fighter pilots at its C-17 Globemaster III simulating centre. And Larsen & Toubro has successfullyindigenised Samsung’s mobile howitzer, naming it K9 Vajra. This list is not exhaustive. Amid all these deals, India and Japan not been able to iron differences over the procurement of 12 US-2i ShinMaywa amphibious search-and-rescue aircraft for the Indian Navy, is a rare eyesore.

We are now talking about the mainstreaming of defence manufacturing as a regular industrial activity, following the release of the Defence Procurement Procedure (DPP 2016) at the Defexpo held in April 2016. Indigenously Designed, Developed and Manufactured (IDDM) was introduced as a prioritised category of procurement. This means foreigners are making defence equipment in India. There will also be better coordination with the industry and the end user, our military men.

What Was Holding Them Back?

An industry would obviously not be interested in investments in scenarios where:

Till the time India had a 49 percent cap on FDI, we, therefore, saw no enthusiasm on the part of the reputed manufacturers of war equipment to come to this country to set shops. It may also be recalled that these companies witness long stretches of no order once the committed aircraft have been delivered to the customer countries. During these times, their employees are often threatened of retrenchment. Lockheed Martin is the most troubled of the lot. SAAB-AB saw a phase of uncertainty after the integration of Reutech into the company. Boeing is better off due to the variety in its portfolio but some businesses, like that of satellites, have been through rough patches, subjecting the group company’s finances to stress.

As their coffers dry up, servicing a new order becomes as difficult a proposition as it was for Russia to remake Admiral Gorshkov as per the specifications laid down by India. Later, when India scouted around for Medium Multi-Role Combat Aircraft (MMRCA), our negotiators were uncomfortable with MiG-35 because of the experience of the hassle, cost overruns and overshooting of the deadline again and again— in the course of Russia turning the ship named above to INS Vikramaditya. That notwithstanding, Russian state intermediary Rosoboronex-porton is also in talks with India to modernise our military equipment sourced from that country under the “Make in India” programme.

A manufacturing base in India and our requirement to add several squadrons to the air fleet to face the eventuality of a two-front war assures these companies of a regular customer. From the making of the aircraft to their delivery, it is a long-drawn process spanning years. In the Indian Army, Indian Navy and Indian Air Force, the famous manufacturers have found a steady clientele. As Jan Widerstrom, Chairman of SAAB India, puts it, “SAAB is not only looking at setting up a base here but also helping in the development of aerospace capability for many more years to come.”

While the US-led NATO countries are pernickety about sharing weaponry that can deliver atomic bombs, India, being a nuclear non-proliferator with a no-first-use policy, a unilateral compliant of the Missile Technology Control Regime (MTCR) and with a long track record of peace, was for long poised for such partnerships. The years following the signing of the India-US civilian nuclear deal, agreement with the International Atomic Energy Agency (IAEA) and a pact with the Nuclear Suppliers Group (NSG)— which entailed segregating our nuclear facilities and throwing the civilian section open for international scrutiny— solidified the mutual trust.

To address the issue of China’s hegemonic designs over the international trade route passing through the South China Sea, the U.S. is also looking forward to using Indian bases for quick accessibility for its soldiers to the disputed region. That our defence forces can use American military bases, too, indicates the recentdialogue between U.S. Defence Secretary Ashton Carter and India’s Defence Minister, Manohar Parrikar. This has further enhanced mutual faith between the two countries. In April this year, the two sides also pledged to ease technology transfer from the U.S. to India under the Defence Technology and Trade Initiative (DTTI).

Parrikar’s statement that Lockheed F-16, Boeing F/A-18, Dassault Rafale and Eurofighter Typhoon were serious contenders to grab the MMRCA order was classic bargain-talk. Sweden must have observed how hard it has been for Dassault to sell its Rafales to India— 15 years of negotiations— after UPA’s policy paralysis and despite Modi-led NDA’s decisiveness in the 126-aircraft government-to-government purchase. India was looking for 50 percent offset while France was initially ready only for 30 percent. Whereas India wants a minimum of 30 percent, whenever it procures equipment worth more than Rs 300 crore, the demand was scaled up because the UPA-era agreement did not come through. Modi, in a bid to fill the deficit of squadrons in the Indian Air Force, settled for a government-to-government transaction. Now, if Dassault is getting in a big order in a jiffy, where the standard route takes many years, it must be ready to concede some terms to the customer (India).

So, France offered that the maker of Rafale’s engine Safran would invest € 1 billion Euros to develop jointly with India the Kaveri engine for Tejas. Its proposal ofdeveloping smart cities in India, instead, was rejected.

Seeing that its cost would be substantial (almost € 4 billion Euros), France agreed to 50 percent— offsetting after India signed the $8.9 billion dollar deal. As of now, India might agree to sign the agreement first (as an assurance to France), but it wants a discount of € 150,000 on the whole deal amount to do that.

With all this hard bargaining going on with France, there is no way Sweden’s SAAB-AB can sink its teeth into this lucrative market if it does not agree to industrial offsetting and technology transfer. If it has begun looking for six big Indian partners and hundreds of smaller ones for the supply chain, it implies it is ready to transfer the “know-how” to us. No advanced military power can ignore a country whose latest defence sector allocation is Rs 2.58 lakh crore and which now wishes to use a huge chunk of this money, not in imports but joint-productions with foreign companies.

Our Issues and Solutions

India is looking at a time 20 or 30 years ahead insofar as its adequacy in military preparedness is concerned. On the one hand, the Defence Research and Development Organisation (DRDO) could develop an artillery system, Prithvi missiles and some other projectiles; on the other, it has failed to deliver complex moving machines like battle tanks. While the two years of Modi government has made it clear that he is temperamentally against reforming any sector drastically, the DRDO is here to stay while the co-existence of a vibrant, private alternative is possible in the coming decades. For that, adequate exposure must be given to the small firms that are right now entrusted with the task of building spare parts and munitions for our defence forces.

While the foreign companies we are talking about are huge— with considerable overheads— their Indian partners need to be considerably big and efficient to be able to pull off collaborative manufacturing. Efficiency calls for skilling— the government must incentivise such a development of the human resource.

To ease these businesses, therefore, if a firm assures the government that it will use the money in researches approved by the State, it enjoys a weighted deduction of 200 percent in the assessment of amounts paid to a national laboratory, university or institute of technology, or specified scientists. This is to address the Indian private sector’s reluctance to invest in Research and Development (R&D).

The NDA government, right after assuming office declared that several parts, components, castings, forgings, etc. would no longer require industrial licensing. Further, there is a weighted tax deduction under Section 35 (2AA) of the Income Tax Act. The capital, as well as revenue expenditure on R&D, is encouraged with a weighted tax deduction of 200 percent under Section 35 (2AB) of the I-T Act. Incentives offered by the states would be extra.

For the immediate future, Modi’s concern is what it has always been while dealing with the private sector— indigenous or foreign. How many jobs is the question he asks? And here, he is not looking at American employees of Boeing and Lockheed Martin or Swedish staff of SAAB. Right now, there are about 12 lakh people working in India’s defence sector. Over the next decade, if all these partnerships materialise, we will need 30.5 lakh employees in this field with 18.5 lakh of them being skilled workers, according to CII estimates.

Finally, recall India’s first nuclear bomb. A visit to the Soviet Union’s Dubna by our scientists P.K. Iyengar et al. was enough to understand the system, reverse engineer it and develop our own device. With technology transfer being an essential part of these deals with foreign companies, the Indian ability to learn and reproduce fast— if not to invent first hand— will translate into future weapons being made here originally and wholly, without partnerships.