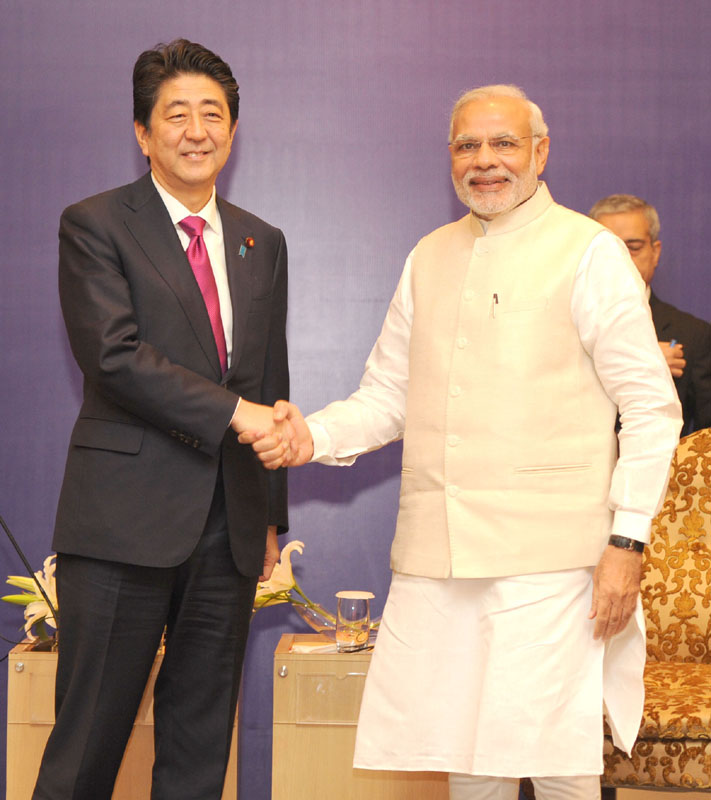 India’s Act East policy and Prime Minister Modi’s Make in India drive coincide with the shifts in the Japanese post-war security policy and the April 2014 easing of the self-imposed arms export ban. The Agreement concerning transfer of Defence Equipment and Technology Cooperation signed during the latest visit of Prime Minister Shinzo Abe on December 12, 2015 unveils a new chapter in India-Japan defence cooperation by making available defence equipment and technology needed to carry out joint research, development and/or production projects.1

India’s defence modernisation presents enormous opportunities for the Japanese defence industry, which until recently concentrated exclusively on the domestic market in order to demonstrate Japan’s commitment to peace.

India’s defence modernisation presents enormous opportunities for the Japanese defence industry, which until recently concentrated exclusively on the domestic market in order to demonstrate Japan’s commitment to peace. Now, there is tremendous scope for redefining the contours of the bilateral defence cooperation by way of transfer of, and collaboration on, projects related to defence equipment and technology.

The most recent India-Japan Defence Ministerial Meeting in March 2015 underscored that defence technology cooperation “can emerge as a key pillar of bilateral defence relations”.2 Besides, Japan has been identified as a privileged partner in the Make in India campaign by Defence Minister Parrikar.3 India is interested in joint development and production of defence equipment. The progress on sourcing Japanese defence technology – for instance, negotiation on the Utility Seaplane Mark 2 (US-2) amphibian aircraft – is now in its final stages. Moreover, the manufacturers of the US-2 amphibian aircraft, ShinMaywa Industries, initiated discussions with several Indian counterparts as India and Japan debated the prospects of assembling the aircraft in India. The Pipavav Defence and Offshore Engineering Company will reportedly partner with ShinMaywa Industries in assembling the aircraft in India.4

India plans to obtain 12 US-2 aircraft for use in patrolling the Andaman and Nicobar islands and conducting search and rescue operations in the Indian Ocean. While Bombardier (Canada) and Beriev (Russia) expressed interest in responding to the Request for Information (RFI), the US-2’s competence vis-à-vis rapid surveillance and response enabled by state of the art technology, rough sea operation capability, lake/riverine landing capacity, and short take-off and landing characteristics are best suited for securing critical SLOCs, conducting air sea rescue, casualty evacuation, humanitarian relief and disaster management, as well as constabulary operations and Maritime Domain Awareness (MDA) assignments of the Indian Navy. While ShinMaywa Industries is not a fresh entrant in India – it has provided aerobridges for airports and set up waste water treatment pumps5 — the US-2 is the first Japanese aircraft offered to India which is otherwise used mainly by the Japan Maritime Self-Defense Force (JMSDF).

Building upon the deepening bonhomie, Modi had earlier encouraged Japan to participate in Project 75 India. The objective is to strengthen naval power by building six stealth submarines in India.

Earlier, Keidanren (Japan Business Federation) pressure on the Abe administration had enabled a policy shift in April 2014 concerning the export of military equipment aimed at supporting Japanese firms, which were restricted to the domestic needs of the Self-Defense Forces. Following this, Japan has entered into several military technology deals, including the export of Mitsubishi Heavy Industries manufactured gyroscopes to enhance the accuracy of the US developed Patriot Advanced Capability-2 (PAC-2) missile interceptors, supplying sensor technology to Britain aimed at improving air-to-air missile guiding capabilities, exploring the prospects of a submarine deal with Australia, and building underwater drones and robots capable of operating in radioactive surroundings with France.

Building upon the deepening bonhomie, Modi had earlier encouraged Japan to participate in Project 75 India. The objective is to strengthen naval power by building six stealth submarines in India. He welcomed the manufacturers of the ultra-quiet Soryu class non-nuclear attack submarine, Mitsubishi Heavy Industries and Kawasaki Heavy Industries, to compete with other contractors including DCNS of France, HDW of Germany, Rosoboron export of Russia and Navantia of Spain.6 It is, however, important to note that in such projects, technology prerequisites, project timeframes, and economic practicability often complicate military technology cooperation. Besides, cooperation and access to Japanese technologies including communications, electronic warfare technologies, and surveillance radars should be explored.

Since both Modi and Abe have pledged to realise the full potential of the partnership, this is an opportune time for addressing the challenges and producing tangible gains while deepening the scope of India-Japan defence cooperation.

In addition, there are exchanges on UN peace keeping operations between the Centre for UN Peacekeeping (CUNPK) of the Indian Army and the Japan Peacekeeping Training and Research Center (JPC) of the Joint Staff College and the Central Readiness Force (CRF) of JGSDF.7 In a welcome development, Japan has also become a regular partner in the India-US Malabar Exercise. Besides, an agreement concerning security measures for the protection of classified military information has been signed during the latest summit which guarantees the mutual protection of confidential military information shared with each other, provided they are consistent with the national laws of the receiving party.8

India-Japan relations have been elevated to a Special Strategic and Global Partnership in the 2014 Tokyo Declaration. For long, maritime cooperation constituted the core of India-Japan defence and security cooperation. To add further value to the relationship that has ‘the largest potential in the world’,9defence cooperation needs to advance from joint exercises and multi-faceted exchange frameworks to co-development and co-production of sophisticated defence equipment and technologies. The December 12, 2015 agreement on Defence Equipment and Technology Cooperation is a big step that will further consolidate India-Japan strategic ties. Since both Modi and Abe have pledged to realise the full potential of the partnership, this is an opportune time for addressing the challenges and producing tangible gains while deepening the scope of India-Japan defence cooperation.

Research Assistant at IDSA and pursuing her Doctoral research from the East Asian Studies Centre in Jawaharlal Nehru University.