Killing of Indian Soldiers on LoC 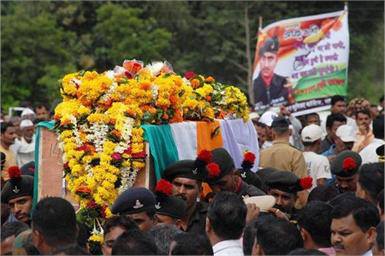 Five Indian soldiers were killed in Poonch Sector without warning or getting a chance to defend themselves. This was a sneak attack in an area covered by the ceasefire agreement signed by both countries and thus they had a right to patrol it in safety. This was a clear stab in the back of these unsuspecting soldiers.

This is the work of a Border Action Teams (BAT). These teams were formed earlier this year in response to the pleas of Mirwaiz Umar Farooq and  Yasin Malik during their separate trips to Pakistan in which they pleaded that Pakistan must do something soon to revive the ‘Freedom Movement’ or it will wither away forever. These individuals had detailed meetings with both the Army Chief Gen Kayani and LeT supremo Hafiz Muhammad Sayeed.

Pakistan knows that we will certainly display immense anger and send a strong protest but at the end of the day, will do nothing on the ground…

BAT is an integrated team comprising commandos from Special Services Group of Pakistan Army, specially trained terrorists of LeT and soldiers incorporated from local units where the operation is taking place. They are specially trained and equipped. BATs operate in conjunction with Pakistani posts that provide them fire and other logistical support during their operation as needed. It is BAT that is responsible in this big increase in our casualties as compared to previous years.    Pakistan tries to palm off responsibility for their actions by calling them non-state actors.  That is a mere fig leaf defence.   With the high density of troop deployment along the LoC no one can operate ahead of the line of posts without Army knowledge and support.

Pakistan indulges in such behaviour because our past responses on loss of lives of our soldiers and civilians, has convinced it that it can continue getting away.  It knows that we will certainly display immense anger and send a strong protest but at the end of the day, will do nothing on the ground that could hurt our neighbour lest the peace process is derailed. They are exploiting our sincere desire to promote peace in the region. That alone is what matters to Pakistan and more so to its Army which continues to control Pakistan’s Indian and Afghan policies, no matter which political leader rules in Islamabad.

Our reactions have become totally predictable – verbal expressions of deep anger and outrage, an odd flag burning, strong diplomatic protests and then amnesia. We soon forget what had happened, forgive everything and get back to lighting peace candles at Wagah. ‘Business as usual’ re-enters our political lexicon and our experts rush back to the negotiating table with not an iota of change on part of Pakistan. No wonder, the same cycle continues repeating ad nauseam.  In January 2013, it was the beheading of Martyr Hemraj Singh, now this killing of five soldiers; the cycle will continue and will only intensify come 2014.

That ceasefire by now has become totally one-sided and shackles only our troops.  Pakistan routinely opens fire whenever it has  infiltrators to push through into J&K or otherwise…

There will always be some Cameron from some small distant island or a spokesman from Washington, DC providing us a pretext to justify going back to the negotiating table.  Those of us who think that this time it would be different are letting their hope override their experience. The only way we can break this cycle and stop these outrages is if we empower our military commander on the spot to start paying Pakistan back in the same currency. Pakistan has to be made aware that she has to pay a price for her actions. The first response to such brazen acts should come from the soldier, not from the South Block.

Empowerment does not mean just provisioning of the latest weapons and equipment though that is a big part of it. It also means appropriate permissions and authorizations to not only defend the LoC and themselves, but to ensure that Pakistan also observes the ceasefire in both letter and spirit; a ceasefire that it had itself proposed and signed. The ceasefire also entails no support to infiltration of terrorists across LoC. Whenever Pakistan fails to so observe the mutually agreed norms, there must be consequences severe enough to force it to start doing it.

It might be of interest to remember what had made Pakistan offer the ceasefire in the first place in 2003. It was exactly the empowerment I mentioned. Our soldiers had started retaliating and artillery duels had become common for which Pakistan had neither matching guns nor sufficient ammunition – it has less of both now than it did in 2003. In that heated environment, it found it hard to push through the infiltrators, which had always been its main objective. Finding its enterprise no more cost effective, it proposed a ceasefire.

That ceasefire by now has become totally one-sided and shackles only our troops.  Pakistan routinely opens fire whenever it has  infiltrators to push through into J&K or otherwise whenever it sees an opportunity to undertake some risk free attacks to raise the morale of its own Ghazis and the ‘Freedom Fighters’ in J&K.

3 thoughts on “Killing of Indian Soldiers on LoC”