Kashmiri Youth and the Democratic Process 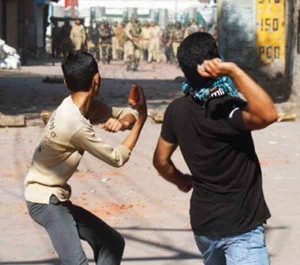 Kashmir, despite being in the throes of a very unfortunate environment of violence, has witnessed a steady improvement in literacy levels over the last few decades. The 2011 census recorded a whopping 13 percent increase in literacy levels across the state from 55 percent to 68 percent. The female literacy showed an increase from 20 percent in 1981 to 58 percent when the census was carried out and the male literacy doubled from 44 percent to 78 percent in the corresponding three decades.  The percentages, by themselves, indicate the commitment towards education in the region starting from the level of the nucleus family to the government. The adverse circumstances have not come in the way of the will of the people to focus on education.

The end result of this single minded pursuit is that the new age Kashmiri is intelligent, hardworking and forward looking. Each and every youngster who is being given some opportunity is making the best of it. There is no dearth of initiative among the younger lot; a slight push in the right direction makes them achieve outstanding results.

It is the inherent strength of the youth which makes there active participation in the election process very important. They need to vote in large numbers in order to get their voice heard in the highest seat of democracy – the Parliament. There is, sadly, a certain degree of reticence among them in going out to vote in view of the poor performance of the local political leadership that has been unable to understand their needs and respond to the same.  The disenchantment of the Kashmiri youngsters is palpable when they point towards broken roads and poor educational, health facilities and infrastructure in general.

More significantly, they are very upset by the inability of successive governments to fully utilise their education and potential. The high levels of literacy achieved with great difficulty and sacrifice has not been successful in generating the degree of prosperity that would be seen in other parts of the country and the world under similar circumstances. The state continues to reel under a very high level of unemployment which is escalating with every passing year. While the recorded figure of the unemployed stands somewhere close to one million the actual figure is much more, since a large number do not register in the employment exchange. As per the Economic Survey Report of J&K, the unemployment rate in the state is 24.6 per cent. However, in the age-group of 18 to 29 years, the unemployment rate is of 13.2 per cent.

Chronic unemployment and under-employment has spawned problems in the state. The deficiency of jobs has led to too many young people remaining idle, leading to the old adage of “an idle mind being a devils workshop.” The situation is being exploited by the forces inimical to the development of the state. The younger generation is being led, by these inimical forces, along the wrong path where vices like drug addiction and a bias towards counter-productive revolutionary ideas are being imbibed in them. Sadly, a segment of the youth, however small, becomes disenchanted enough to stake its very life on the alter of a misplaced and self destructive ideology.

Politically, the youth feel that that the necessary impetus to resolve the Kashmir issue once and for all has not been forthcoming from the political leadership, this leads to the belief that there is a deliberate attempt to keep Kashmir on the boil since such a situation attracts money and power to a select few. There is a palpable environment of distrust for the politician in Kashmir even as the elections are approaching.

An attempt by the political leadership to reach out with the correct message is bound to give good results. It is so because the youth are looking for an opportunity to break the cycle of violence and despair, they wish to move on from the abysmal conditions that their parents and elders have passed their lives in. They support militancy because they wish to give a message of going to any extent to achieve their desires and ambitions. If the political stream can come up with the solutions to their problems, they will willingly shed support to militancy and other such means.

There is a message here for the youth too. In order to gain what they wish for they will need to have a good responsive government in place. For this selection of the right candidate during elections is imperative. Also important is to have faith and trust in the government once it is sworn in. Successive governments have come forward to help the youth but there is a discernable inability to accept the help and use it to advantage.  Government will readily create an enabling environment for generating employment avenues in critical sectors like MSME, agriculture, food processing, horticulture and tour and travel industry, but those who have to do the work on ground will also need to apply themselves. The youth needs to expand their horizons and break the mindset of staying at home. Attempt has to be made by the people to open the economy by welcoming outsiders. The acute dependence of government jobs that has been the norm for decades on end must be overcome.

It is against this backdrop that engagement of the youth of Kashmir takes predominance! It is a generation that wishes to grow wings and fly out but is not getting the right opportunity or the environment to do so; it is suffering due to no fault of its own.

It can only be hoped that the political parties will feel the pulse of the largest segment of the electorate in Kashmir and base their campaigns on issues that the close to the heart of their constituencies instead of indulging in a negative blame game, as is the norm. A good positive election campaign will also be an indicator of the parties having learnt their lessons and reset their priorities in tune with the prevailing environment. An inability to do so will harm not only the election process but also the parties in the fray.