The village elders were this time called to the post. Next time if stone pelting happened, the fire will be to kill and not injure, warned the company commander. The message was well driven and the stone pelting that had acquired a status as a compulsive ritual, seized forthwith.

This story gives out how exactly the army deals with such situation amply clearly. But then the story also tells about the pressures the soldiers had to endure from the earlier political dispensation and the administration. This always comes in way of carrying out bonafide military tasks.

On the relevance of Hurrriyat, the response of senior army officers disheartened me of sorts. One of them said, “we need them as they are the acceptable political voices in this Proxy War”. Adding that, “if we eliminate them then the insurgency or the proxy war unleashed by Pakistan through various terror outfits could get out of their control into something as amorphous. The scenario could pan out something like the Al-Qaeda after the death of Osama Bin Laden. Or, even the illusive ISIS”.

Was this their personal opinion or assessment or was this the government’s policy? That I can’t really say, but yes they were all unanimous in their assessment. Hurriyat was a necessary evil.

In short one could safely draw a conclusion that the imagination and the desire to put an end to this Proxy War was either non-existent or simply, dead. Status-quo policy by the Indian government and its agencies should be a cause to concern of all. A policy that has clearly failed for near three decades continues to be a guiding term of reference in our war against terror.

Frustrating as it was to see us tread the same failed beaten track. Despite the feeling of hopelessness at the status quoist policy, there was something really delighted me. And that was ‘a one of’ the reason given for the violence spiralling out of control post 2010. This one issue perturbed many a soldiers like me. And that was the flawed policy of “JeeJanab” and “Sadhbhawna”.

As per the assessment of these army officers, a sense of overconfidence and victory in this Proxy War prevailed at large. Since the violence levels had dropped to the normal law and order statistics, there was smugness that had set in.

The elated mood lead the senior military hierarchy to prematurely take the operations into the next level of consolidation phase. One of the senior army officer with whom I was interacting with, said that during this period, the focus intelligence gathering and kinetic operations shifted in to misplaced concept of winning the hearts and minds through Sadhbhavna and JeeJanab.

This premature change in gears made the army loose its huge assets created over decades in human intelligence. Army was convinced that the war was over, it’s time to bring in the Paramilitary and move out. Thus the human intelligence sources were abandoned.

As the terrorism raised its ugly head again, the army was caught unaware and so the administration. The initiative was completely with the Pakistani proxies. There was a complete paradigm shift when compared with pre 2010 period. Army was now fighting the new radicalised phenomenon influenced by the global Islamic terror outfits in the Kashmir valley. A self-sustaining model was in place now. Social media and the internet provided secure platforms for self-radicalisation and recruitment.

Army had lost the art of intelligence gathering at the sabre end. Ironically, during the lull period of 4-5 years, when the army was busy constructing bus stands, community centres, repairing schools and building weaving centres and toilets. The ISI was working overtime along with their proxies in the valley, the Hurriyat and the Jammat. The ISI was preparing for a bigger battles at different levels. They were investing in, by radicalising the youth and replacing the Kashmiriyat by Madudi’s version of Islam.

In the meanwhile our Indian Army Generals were busy appearing on cover pages of lead current affairs magazines, seen appeasing the locals through JeeJanab. And their counterparts in the ISI were busy stitching up their new strategy.

Their strategy was multipronged. Harass the Indian army on the line of Control by insistent cease fire violations and BAT actions. Evolve innovative techniques to infiltrate terrorists and war like stores. Mobilise the youth into intifada like uprising under media glare. Aim at seeking high handed responses from the security forces and publicise. Make local heroes out of Kashmiri terrorists and galvanise the population through funerals and social media activism. Disrupt any political exercise and disrupt the civil administration at all levels. Bring in a sense of hopelessness amongst the security forces by carrying fidayeen attacks. Raise the Kashmir issue at all international forums.

The professional army as ours however regained the initiative soon. And today it is again riding on top of the situation. Thanks to the course correction and renewed vigour. Side-lining the concept of wining the hearts and minds through non-military operations like Sadhbhawna and JeeJanab. Army is in the open, ‘All Out’. Now they stand convienced that you only win the hearts and minds through relentless, precise and surgical intelligence based kinetic operations without collaterals. This convinces the population that their well-being and interest lies with the interest of the state and not by going against it. The point when you achieve this psychological parameter, you have actually won the hearts and minds of the population.

Unfortunately during run up to the state elections in November 2014, all the political parties colluded with the anti-national elements in seeking assurances on votes. Thus patronising those very elements that the Army was fighting all along. This in fact was the biggest factor which contributed to the tumultuous years under the PDP rule. Manifesting in street unrest.

I have realised that Kashmir is probably is the only region in the world where terrorism & insurgency coexists alongside steady development and economic prosperity.

Here there is no big industry as such but such beautiful houses, grand mosques and large number of cars are a real surprise.

A greater surprise is for a person like me who has seen Kashmir valley inside out since 1992 onwards. Despite terrorism and insurgency economic growth has been quiet steep, probably the fastest in the country.

But from where is this money coming from?

Traveling on the Srinagar-Uri road one realises that there are predominantly two types of shops in a sizeable count, cement & construction material shops or the mutton shops.

You will never come across a slum or a beggar anywhere in the Kashmir valley. Proper roads connect all the villages and non you would find without electricity, especially on the valley floor.

Blame it on this time of the year, I could not spot any great tourists activity either. On the airport roughly 80% of the transients were the soldiers traveling into or moving out of the valley and not the tourists. 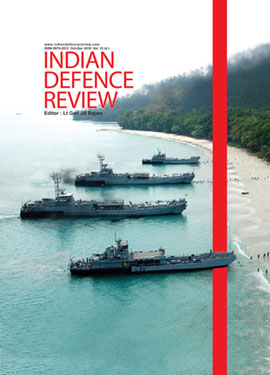 Maybe the apple economy is flourishing and booming, giving that spin to the economy bringing this prosperity.

Or, is it the terrorism industry which is contributing to this economic boon ????

As I was writing this piece a news came which was out of the templet. It shattered the stereo type but never made the headlines, “an Army vehicle met with an accident in Kralpora of Kupwara district in North Kashmir and local Kashmiri youths helped and saved injured Army soldiers. Many of them even offered their blood to injured”.

The Army continues to eliminate the Pakistani terrorists as the democracy in the state graduates to higher level of empowering the local population at the grass roots level through the municipal and panchayat election. The encouraging voter turnout up to 80 percent at places in these local body elections and simultaneous kinetic operations eliminating the scholar turned terrorists, Manan Bashir Wani, raises hope for peace in this conflicted region of Kashmir.