Japan and India’s Comparative Approaches to Meet the China Threat 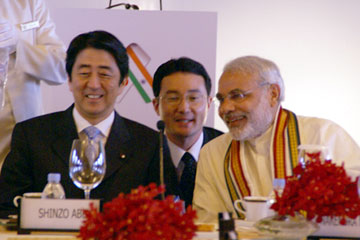 Japan and India are the twin pillars of Asian security against the overwhelming Asian perceptions of the China Threat emanating from China’s oversized military buildup and China’s hegemonistic impulses to dominate Asia.

The China Threat to Japan and India manifests itself both as a ‘direct threat’ from China singularly and also supplemented by China creating two military proxies in the form of two ‘rogue nuclear states’, namely Pakistan and North Korea. Thus we witness the China-Pakistan Axis menacing India and the China-North Korea Axis plaguing Japan’s security. Pakistan and North Korea could not have emerged as nuclear weapons states with IRBM arsenals but for China’s technical assistance and political support.

Japan’s political and strategic cultures comparatively outshine the Indian strategic and political cultures which have yet to mature befitting the national power aspirations of India in the 21st Century. Briefly, Japan zoomed through after the Meiji Restoration to sit at the Versailles Peace Conference in 1919 as an ‘equal power’ of the victorious colonial powers dominating the globe. Virtually, in the same time span of fifty years or so India was floundering in the quagmire of Non-Alignment and unable to achieve strategic recognition as a serious ‘power contender’ in the Asian strategic calculus.

Japan therefore has a rich heritage to historically draw from in terms of national strategic and political responses to threats to its security. It was for nothing that Japan in the heyday of Western colonialism could prevent Western penetration of Japan from the 16th Century to the middle of the 19th Century. India in the same period was subjected to Mughals Islamic rule followed by British colonial rule.

Formative influences in the evolution of modern nation-states are crucial determinants and Japan today is comparatively better placed to meet the China Threat than India. India’s political leadership over the past decades has been “strategic culture-deficit” and the less said about India’s political culture.

“Threat Recognition” in India is woefully poor as the Indian policy establishment comprising the political leadership-bureaucrats nexus side-lining the Indian military hierarchy from higher defence decision-making process resort to “Risk Aversion” strategies when facing threats. The “China Threat  Recognition” or the lack of it from Nehruvian era down to the ten wasted years of 2004-2014 of Congress Government’s strategic obliviousness to the China Threat  need no further amplification.

Japan comparatively, is far better placed in terms of integrated higher national security decision-making, martial traditions and not shying away from hard realities even when it was subjected to two atomic bombings by the United States in 1985. The “China Threat Recognition” in Japan visible today is hard-headed, single minded in focus and geared towards meeting the China Threat singly or in alliance with the United States. Japan is not apologetic about the threat from China which is very potent today but is proceeding ahead without advocacies like in India for risk-aversion policies against China.

Japan’s politico-strategic approaches to meet the China Threat combines different strands intertwined to craft a strong response to any Chinese military misadventure against Japan. At the apex level is the countervailing power of the United States through its military alliance with Japan reinforced with Japan’s willingness to defray expenses of US forward military presence in Japan and Asia. Japan is presently breaking-out of the shackles of its Peace Constitutions and enacting legislations to enable Japanese Forces to undertake contingency operations further afield. Further, Japan is engaged in a well-planned ‘military capacity building’ of nations like Vietnam and the Philippines facing Chinese military intimidation.

India’s politico-strategic approaches to the China Threat/ dangers are not only confused but confounded. We still have Non-Alignments gladiators till recently preaching ‘strategic non-alignment ‘and strategic autonomy. India to meet the China Threat has no alternative but to enlist the countervailing power of the United States. This stands amplified in a separate Chapter 9 ‘United State and India’s 21st Century Strategic Choices in the Context of China-India Military Confrontation’ in my recent Book ‘China-India Military Confrontation: 21st Century Perspectives’.

Comparatively, Japan has displayed greater urgency to meet the China Threat across the full spectrum of politico-strategic responses, military buildup and war preparedness. India after 10 years of ‘strategic drought’ and ‘war preparedness paralysis’ of the previos Government is now engaged in a belated catch-up game with all its implications.

Concluding, the major observation that needs to be made is that India has to learn a lot from Japan’s strategic and political culture in warding off threats to national security. India needs a countervailing power like the United States and India should recognise that to sit at the high table of global power it cannot achieve that status by “platonic strategic partnerships” or by “Risk Aversion” policies. India’s strategic autonomy would not be lost by stiffening substantially the US-India Strategic Partnership and the Japan-India Special Strategic Partnership. These three democratic nations intertwined in bonded strategic partnerships could best ensure India’s national security interests in the 21st Century.