Home  >  Spotlights  > Geopolitics  >  Islamic Terror and India: What are We Doing?

Islamic Terror and India: What are We Doing? 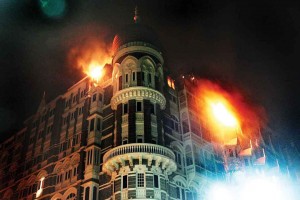 Islamic terror is something that is causing more damage than that caused by many natural disasters together. Al Qaeda, ISIS, Boko Haram and so many more, their groups are only adding more destruction to the dismay of the international community. In recent times, Islamic terror groups have also been actively using the social media to spread hatred and indoctrinate some vulnerable Muslims into joining their cause.

Even after America declared Hafiz Saeed as a terrorist causing international threat, Pakistan decides to turn its head the other way especially when Saeed masquerades openly in Islamabad as a social servant.

Even after America declared Hafiz Saeed as a terrorist causing international threat, Pakistan decides to turn its head the other way especially when Saeed masquerades openly in Islamabad as a social servant. The World has spent enough time trying to understand Jihad, its nature and targets. The one problem that the world faces today is if this bloodshed would ever get over? Terrorism experts claim that the fundamental problem is with the interpretation with some of the Quranic text which the terrorists use to justify their cause.

According to some of these extremists, it becomes mandatory to fight those who do not believe in Allah and those who do not adhere to Islamic fundamentals are the enemies of mankind. Islamic terrorist outfits are against freedom of expression and democracy. They want all military forces withdrawn from their territory and rule by the gun as Saddam Hussain did. They are against the liberation of women who they regard as subservient beings. They hate to see women as waitresses calling it a western marketing gimmick. They also find the lending of money sinful. For all their miscreation and nuisance, twist some Quranic verses (the so called sword verses) to defend their line of thought.

There is also a huge turbulence in some Islamic societies with tensions escalating between Shias, Sunnis, Kurds and other sub-sects: the situation leading to the recent debacle in Iraq. The roots of the crisis lie in the fact that perpetrators of Islamic terror have very strong networking skills and most of the times manage do dodge intelligence agencies. Then they gauge the shortcomings of the bureaucratic setup and penetrate through these loopholes.

Mumbai has always been the victim of terrorist attacks, maybe the most in India, beginning with the 1993 train bomb blast till the 2008 terror siege. The obvious reason for targeting Mumbai is the intention to paralyze the economic backbone of the country.

Islamic terrorist outfits are against freedom of expression and democracy.

Tiger Memon, the mastermind behind the 93 blasts, had failed to plant the bombs near Shiv Sena Bhavan which he so desperately wanted. If sources are to be believed Tiger is still very much active in POK and though his brother and some other family members are in jail; Tiger has made a reasonable amount of wealth from his real estate business in Karachi besides funding terrorists in POK (Pakistan Occupied Kashmir) to keep the terror reign alive.

He had famously told his boys then –“One has to sacrifice in Jehad”. His brother who has been sentenced to death is claiming mental illness and pleading clemency. In fact, the Dawoods, Tigers, and Hafiz Sayeeds want to have an Islamic caliphate as desired by other Islamic terrorists too.

There are thousands of illegal immigrants from Bangladesh who have come with a one way ticket and may never go back. In the suburban slum areas of Mumbai like Jogeshwari, Mira Road, Bhayander, Nallasopara have plenty of illegal Bangladeshi immigrants who work as cheap labour at construction sites and other daily wage jobs. When asked where they hail from, most of them say they are from Maldah but the east Bengali twang in their accent says it all. The moot point here is that some of the local leaders are manufacturing a vote-bank of these illegal immigrants. Some of these poverty-stricken, vulnerable, identity-less people are the main targets for indoctrination by an Islamic terror outfit.

David Coleman Headley could not have carried out the 26/11 terror attacks without the help of the locals. Who were the locals who helped him?

The IM (Indian Mujahideen) is known to brain drain young unemployed muslim boys into joining their network showing them grand dreams of martyrdom and prosperity. Many facts are suppressed due to vote bank politics. David Coleman Headley could not have carried out the 26/11 terror attacks without the help of the locals. Who were the locals who helped him? How many of them have been detained or questioned? Why does the US not share more information about Headley with India? Mahesh Bhatt’s son Rahul Bhatt was detained and interrogated. The Home Ministry of Maharashtra could have done better than merely quizzing a celebrity kid! Perhaps, after Sanjay Dutt, celebrity-gangsta make good news.

These and so many other questions continue to riddle our minds. There is all-pervasive fear when we travel in local trains or walk around in public places. The next government has much on its hands. However, as nation development goes on, nation’s security should not be left on the sidelines as these terror groups are spawning off-shoots in all parts of the world. India is one of their favourite targets!

Shaumik Ghosh,has been working with the media as a journalist and writer since the last 12 years.